'Supernatural': Jensen Ackles and Jared Padalecki on the Final Goodbye One final goodbye for Winchester boys on Supernatural.

Jared Padalecki and Jensen Ackles gear up for the final farewell for the beloved series, which kicks off the last seven episodes Thursday on The CW. The delayed goodbye, a result of the nationwide shutdown due to the coronavirus pandemic, meant the duo has been on an extended farewell tour since last March, when it was announced season 15 would be the last chapter to Sam and Dean’s story (for now).

“I don’t know what this says about me, but I was dreading the goodbye in March,” Ackles told ET’s Matt Cohen in an exclusive interview over Zoom after wrapping in September. “Not because I didn’t want to say goodbye, but I’m not good with goodbyes. I just don’t like saying goodbye, you know, ‘I hope you have a great life.’ I don’t like that. And so the fact that it got put off, I was almost a little relieved knowing that it would have to come at some point.”

Padalecki and Ackles returned to set in August after a mandatory two-week quarantine in Vancouver to resume filming on the last episodes, with the final day of production on Sept. 10.

“Yeah, I think similar for me,” Padalecki agreed. “And I feel like trying to find a silver lining in this horrible pandemic we’ve dealt with, it sort of taught me a bit brutally like, ‘Hey, things aren’t going to work out exactly the way they’re supposed to. Things aren’t going to be exactly the way you thought or you’d like or you’d wish. Make the most of it. And so, a lot of my mindset for the last six weeks has been just make the most of it.”

Padalecki expanded on the new normal on the soundstages as they were in production amid new COVID-19 safety protocols.

“It’s obviously less ideal, like Jensen touched on, with people in masks. We were joking, when we would walk off set, we had one way we could walk onto set and one way to walk off — COVID regulations. And so when we’d walk off set, he and I both felt like the stereotypical a**hole actor. The sea would part…,” Padalecki explained. “You’re yelling from your little tape mark on your way to your trailer like, ‘Hey, how’s it going? How’s quarantine, good to see ya. You got a new tattoo, blah, blah, blah.’ That was difficult, but we made the most of it. And like Jensen said, we didn’t really say goodbye to anybody. We said, ‘See you later’… I understand that it was goodbye to a lot of people, but I understand that I will see a lot of the other ones again. And now we’re all getting used to Zoom and FaceTime and we can at least see each other’s faces, albeit from afar. So just trying to keep our heads up about it.” 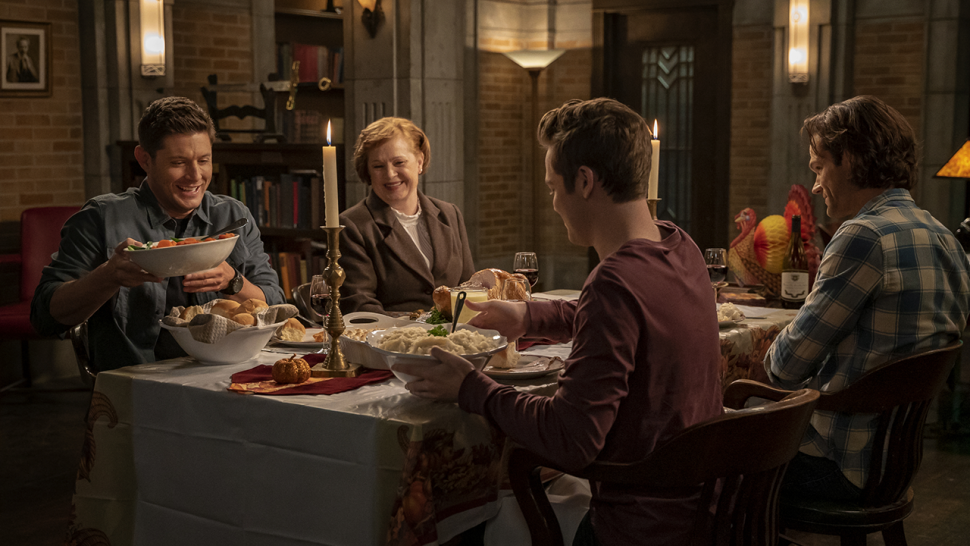 But there was one goodbye both Ackles and Padalecki weren’t emotionally ready for.

“The one goodbye that I know Jared and I both had to deal with was the goodbye to the Winchester brothers, and that was felt,” Ackles reflected. “That was really heavy and you’ll see it reflected in the [final] episode — the emotion of it anyway — ’cause there are certainly parts of the final episode where the character and the human being playing that character, their emotions are very intertwined.”

Padalecki confessed he “cried a lot of tears” for the past seven months, “since I read the last two scripts ’cause we got them in late January or February.” He, Ackles and their Supernatural co-stars and creative team, both past and present, all took to social media to commemorate their time on the show.

“I had my chance to cry my tears,” Padalecki said. “I’m glad I did because that last day, though it was bittersweet, it was more sweet than bitter ’cause I got the sadness out to some degree. I’m sure it will come again but selfishly, I was like, I can look around and smile. There were a lot of tears all over but Ackles and I were kind of looking at each other like, ‘Man.’ It was kind of like finishing the Seattle Marathon. We did it. Dude, we did it, you know? We put in the work… I’ve been with you for 15 years, 15-1/2 years. I’ve seen you sweat. I’ve seen you bleed. I’ve seen you hurt. I’ve seen you going through stuff personally and put it aside for this show, for your character and I know I’ve done the same and it was bittersweet. But it was sweet, man. It was happy. It felt like I could do this again. Even after 15 seasons. Let’s call Peter Roth and Mark Pedowitz and see if they’ll have us for 15 more.”

“There was clearly a satisfaction that occurred of, ‘We did it. We did it,'” Ackles added. “It was definitely an emotional high-five moment.”

As for what the final seven episodes entail, the leading men played coy about Sam and Dean’s last hurrah. The return episode, titled “Last Holiday,” follows the brothers as they meet a wood nymph (guest star Meagan Fey) living in the bunker who is determined to protect her family at any cost. The series finale, airing Nov. 19, is appropriately titled “Carry On,” a likely nod to the series’ signature Kansas song, “Carry On Wayward Son.”

“It is Supernatural, so it’s always a cliffhanger. No matter how it ends, that cliff is hanging,” Padalecki quipped. “Beyond that, episode 19 is more like the season finale of season 15; episode 20 is like the series finale.. Like any good series finale, it pays homage to the beginning, and so Jensen and I worked in a few [Easter eggs] — the writers did on their own — but he and I also worked in a few little homages to those out there who have been around since the get and who are familiar with the cannon and lore history of Supernatural so there are a few little Easter eggs in here.” 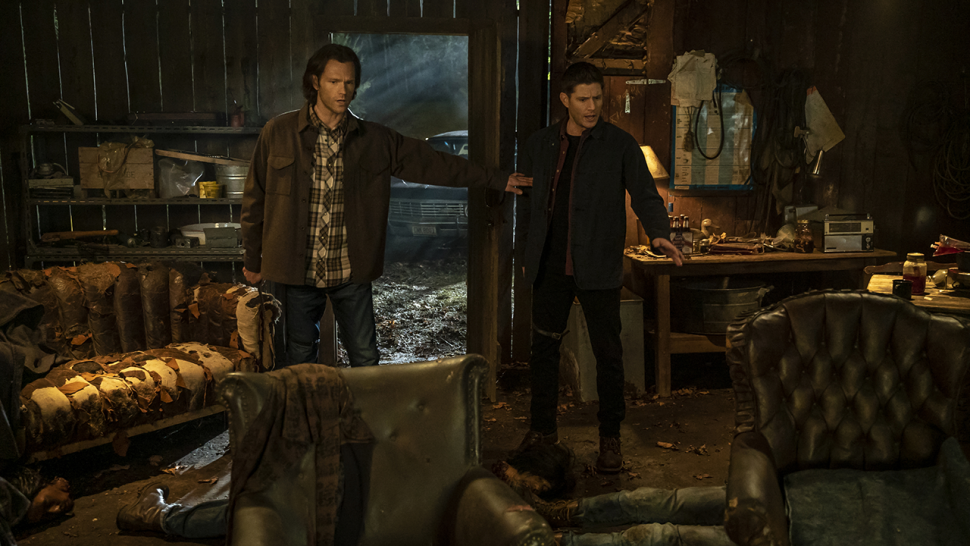 “I’m excited, especially the one at the end,” Ackles teased. “Those who know will pick up on it. Those who don’t will just think it’s normal and that was all Jared. He said, ‘Hey, I got an idea,’ and I was like, ‘Oh of course we’re doing that.’ The final episode, there are some Easter eggs that are laid in there for the hardcore fans for sure. It’s also… I’ll say this, it’s really nice seeing the brothers doing what they’re so good at.”

“For longtime fans, keep an eye out. There are a lot of homages. We end the way we began, to some degree,” Padalecki hinted.

Both Ackles and Padalecki have already booked their post-Supernatural gigs. Ackles will reunite with Supernatural creator Eric Kripke on season 3 of Amazon’s The Boys, while Padalecki will stay put at The CW with the Walker, Texas Ranger reboot, Walker, which also stars his real-life wife Genevieve Padalecki.

“I’ve been a fan of [The Boys] since I saw the first episode. When I was talking to Kripke over quarantine break, I mentioned, ‘Hey, somebody is going to be out of work pretty soon. What is happening over there in your world?’ That kind of started a conversation and he called me the next day and was like, ‘Look, there is a role coming up in season 3 that I could see you throwing your hat in the ring for,’ and I was like, ‘OK,'” Ackles said of how The Boys came to be. “I want to stress this was not him calling me being like, ‘I got this for you. Come on over.’ They were already out to some heavy hitters and guys I was like, ‘I can’t compete with that,’ so I had to fight for it and I’m glad I did.”

“I’m excited to put on a superhero outfit too,” he said. “That is kicka**. I have to be in L.A. for the next couple of months because it takes that long to build it so every two weeks, you have to go in for a fitting and it builds. These things are works of art, so I am excited for that. It will be cool. Finally something my 3-year-old son can be really proud of — a flannel shirt and some boots are not the coolest thing to a 3-year-old but a guy with a mask and a shield…”

“Gen is going to play my dead wife on Walker, which is so cool,” Padalecki said of Walker, which films in Austin, “so we’ll be in Austin together and getting to work together again… She gets to be in the show, which is amazing. She’s such a big part of the show anyway, whether she’s onscreen with me or not. That will be fun to work there again. I have not worked in Austin since 2008 and I would sleep in bed at home and be a part of my kids’ Zoom classes before I go to work or whenever I get home.”

“I did not want to work after Supernatural,” he continued. “I was done, man… I will take phone calls but did not want to seek work and this storyline came up and the cast of characters starting to get built, and I was like, ‘Oh man, I will jump in the pool if you will have me.’ So to be in it and producing it and creating it has been really special. It has been new ground. I feel really special and my love for my new project, I want to stress, is not in any way to detract from my love and gratitude on what we all just finished together.”

Supernatural kicks off the final episodes Thursday, Oct. 8 at 8 p.m. ET/PT on The CW. To watch the interview, tune into tonight’s Entertainment Tonight broadcast. Check your local listings.