Tonight’s (October 31) episode of The Apprentice saw the two teams compete against each other to design and sell a new brand of women’s shoe.

This eventually led to Rick’s firing, but in the process, Karren Brady got more acquainted with the youth of today’s unique vocabulary.

Team Collaborative (Rick, Jackie, Kurran, Kayode, Sarah Ann and Jasmine) chose Jackie to be their Project Manager, after Kurran decided he wasn’t the man for the job as he’d never worn women’s shoes.

While Kurran lurked in the background hinting that Jackie’s ideas might be a few years out of date, the team went about designing their shoe and giving it a memorable brand name.

And the best they could come up with to call their brand was ‘Fleekies’ – as in ‘on fleek’ (sort of). 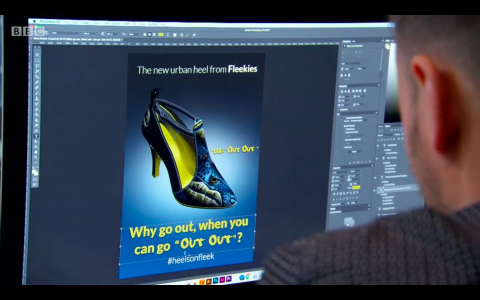 No-one was more confused by the name than Karren, who had to ask what ‘on fleek’ actually meant.

Luckily, Kayode was on hand to explain that it’s a cool, urban way of saying something is good, such as: ‘Your eyebrows are on fleek, Karren’.

But despite their creative name, Team Collaborative and their Fleekies didn’t manage to beat Team Typhoon and their Nu:Switch Vibing 1.0 trainers.

With Project Manager Jackie in the firing line, she chose to bring back Kurran, Sarah Ann, Kayode and Rick to face Lord Sugar.

While Kurran and Sarah Ann both ended up meeting the wrath of Lord Sugar, it was Rick who was ultimately given the boot after failing to make any sales in the last two tasks.

And with Kurran surviving to fight another day, he was warned by Lord Sugar that he better be Project Manager next week, no matter what the task is.

The Apprentice continues next Wednesday (November 7) at 9pm on BBC One.