When I came out of the theater after seeing Bombshell, I felt like I had just experienced emotional whiplash. The movie follows Gretchen Carlson (Nicole Kidman) as she works to sue Roger Ailes for harassment, and Megyn Kelly (Charlize Theron) as she contemplates whether to come forward with her own story.

We know how that situation actually ended: Carlson won her lawsuit, Kelly went public with what happened to her, and Ailes was forced to resign from the network. But the movie left me with one major question: Who the hell was I supposed to be rooting for?

The movie starts with Carlson speaking with lawyers about her potential lawsuit against Ailes. She reads off a laundry list of the things men at the network, including Ailes, said to her, like “You’re sexy, but you’re too much work.” Later in the film, when Kelly does eventually decide to tell her story, she says Ailes tried to kiss her more than once ten years prior, and she had to refuse him multiple times.

In one particularly brutal scene, Ailes asks Margot Robbie’s fictional character, Kayla, to show her loyalty to him by pulling her dress up to show him her legs. She stands in front of him, and he keeps motioning for her to pull it up higher and higher, and her eyes well with tears as she stands there, eventually with her dress up so high her underwear is showing.

Even if you haven’t been in that exact situation, you know how she feels simply by being a woman who exists on this planet. Sure, maybe you haven’t been harassed by your very powerful boss, but you’ve probably been catcalled, or had a guy at the bar who just wouldn’t leave you alone. That feeling is upsettingly universal, the feeling of your power being instantly taken away. This movie asks that you put aside your political alliances to empathize with these women. And it works, temporarily. 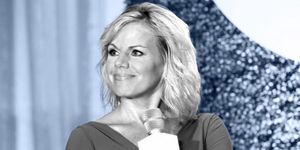 I don’t want to feel bad for people like Kelly and Carlson, because what the movie fails to do is show much of the problematic sides of either. Let’s not forget that Kelly has been called out for racist comments more than once. Remember the time she said black face was acceptable if it was part of a Halloween costume? Or the time she said there was no way Santa or Jesus could be a black man?

What about the time Carlson said focusing on LGBTQ issues was getting in the way of real concerns, like jobs. Or the time she said she “couldn’t get her head around” trans rights. I don’t want to feel bad for women who, at one point, contributed to a machine like Fox News, that makes this country a more hateful place every day.

Most of these details are conveniently left out of the film, except Kelly’s comments about Santa. There’s even a scene where Carlson tries to talk about International Day of the Girl on-camera, and gets reprimanded for it by Ailes. So not only did the filmmakers choose to ignore the problematic pasts of both, but they almost want us to believe that Carlson was trying to make Fox News more feminist by the time she was fired. I don’t buy it.

In the days after I saw the movie, I realized how hypocritical I was being. Feminism is about choice. Those two women should have the freedom to work where they want, regardless of how problematic I find that place to be. And in that place, they shouldn’t have to be harassed, even if they’re about to go on air and say some truly terrible things. , No one should have to deal with having their dreams and career altered because a man couldn’t deal with the word “no.” I don’t have to agree with Kelly and Carlson’s views, but I should be able to empathize with them because they’re women who faced a terrible thing. Their political party shouldn’t factor into that.

These women certainly aren’t perfect, but they still stood up against a system that was created to keep them down, and they got a very powerful man out of a job where he could have perpetuated this cycle. So, in answer to the question of who I was supposed to be rooting for, I’m still not on team Carlson or Kelly, but I’m definitely on team “women not taking any more sh*t.” And I always will be.