The CW's Best Show Ever Tournament: It's Smallville vs. Supernatural in the Final Round! — Cast Your Vote NOW

With The CW’s 15th anniversary right around the corner, TVLine’s ‘Best CW Show Ever’ tournament celebrating the major milestone is gearing up for one final battle, between superhero and supernatural.

The closing, championship round of our March Madness-style bracket tournament pits Supernatural‘s demon-fighting brothers, Sam and Dean Winchester, against Smallville‘s Superman-in-the-making, Clark Kent. Who should be declared the winner?

Review the latest bracket update below, then read more and vote! 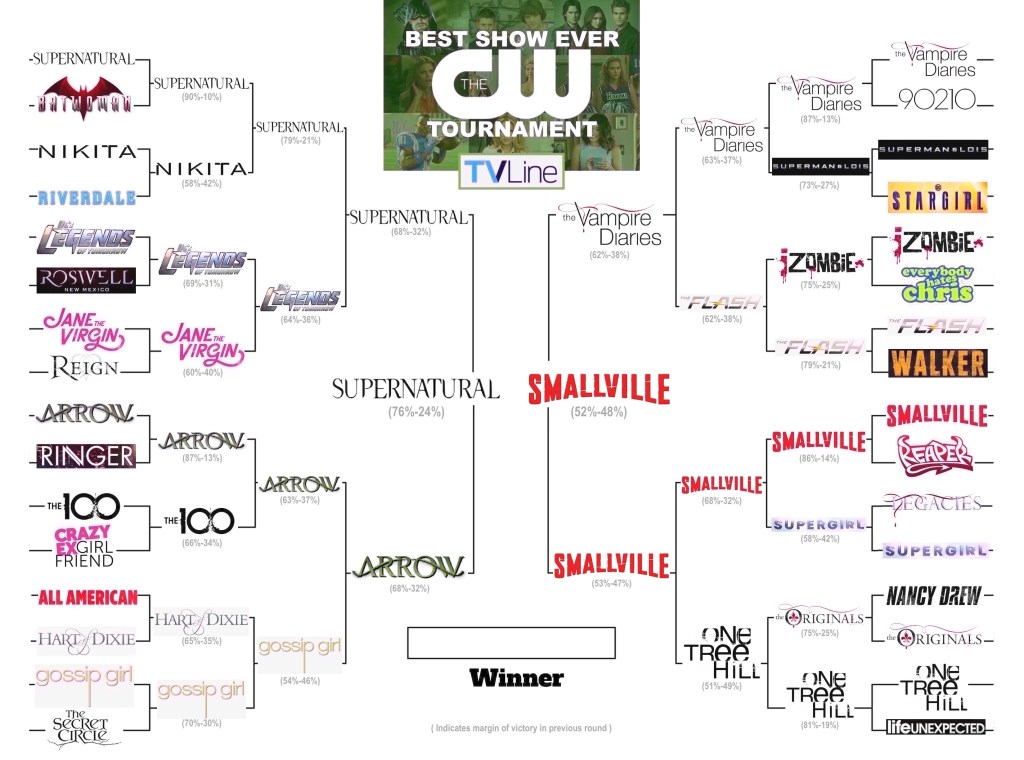 Smallville, which ran for 10 seasons (2001-06 on The WB, then 2006-11 on The CW), starred Tom Welling as a young Kal-El just trying to get through high school without exposing his powers to his friends. The series, which will celebrate its 20th anniversary on Oct. 16, delivered a strong performance throughout the tournament after defeating the devilish comedy Reaper, Arrowverse’s Supergirl and beloved YA drama One Tree Hill. During the Final Four round, Kent went head-to-head with the The Vampire Diaries‘ undead Salvatore brothers in a battle of the chiseled jawlines, proving Welling’s is sharpest of them all. Can the Kryptonian hero pull out one more win?

If we’ve learned anything over the course of Supernatural‘s historic 15-season run (2005-06 on The WB, 2006-20 on The CW), it’s that you should never count the Winchesters out. The CW’s longest-running show saw Sam, Dean & Co. plow through the competition, taking out the likes of Batwoman, Nikita and the Legends of Tomorrow. The SPN Fam showed up in droves for the Final Four round, propelling the series a victory over Arrow — the show that launched the Arrowverse. Supernatural‘s ride-or-die brothers have overcome death, loss of family and numerous apocalypses… but can they stop the Man of Steel?

Does Smallville or Supernatural get your vote to win? Weigh in via our poll below (results are hidden; poll closes after 48 hours, on Sept. 17 at noon ET) to determine which show will take it all home, then hit the comments to back up your choice!

VOTE FOR SMALLVILLE VS. SUPERNATURAL!