‘The Dropout’ Finale Showcased a Perfect Blend of Empathy and Comeuppance

Even for those unfamiliar with the overall arc of the Theranos saga, “The Dropout” made no secret about where its eight-episode version of the story was heading. From the outset, like the ABC News podcast the series is adapted from, there’s Elizabeth Holmes speaking with federal investigators about her role in the growth of the company that promised a medical revolution that never came.

But even with that heavy and frequent foreshadowing, by the time that “The Dropout” gets to Episode 8, “Lizzy,” and you get to see Elizabeth’s deposition without a consumer camcorder filter, this show offers a surprise. Even as Amanda Seyfried’s version of Elizabeth is answering questions about meetings with investors and the viability of certain tech products, “The Dropout” cuts away to Elizabeth and her new beau sharing a tender moment with barely a care in the world.

As directed by Erica Watson, it affords her a moment of happiness and escape, even as it’s proving the main thesis of this finale: When presented with a problem, this is a person who excelled at running away from it. Finding that balance was a process that Episode 8’s editor Steve Welch said took some refining.

“There was initial discussion about making it dreamier, making it feel more in her head, more echoey dialogue, or making it a little bit hazy. What we discovered is we didn’t need to do any of those things,” Welch said. “It probably has a lot to do with Amanda’s acting. Her eyes do different things than the real Elizabeth Holmes’. She’s really able to do that wheels-turning thing. Doing it that way, for me, gave it sort of this intimacy, that it almost it was like what’s going on in her head is almost more present than what’s actually happening in the room.”

That brief glimpse of Elizabeth, already moved on in her mind, is a marked contrast to the steady dissolving that the rest of the episode captures. Hers is not an operatic downfall, with grand and sweeping gestures or cranked-up boardroom showdowns. It’s a matter-of-fact dismantling of a would-be empire, one that you’d expect from a portrait of a company that claimed to pride itself on lean efficiency. 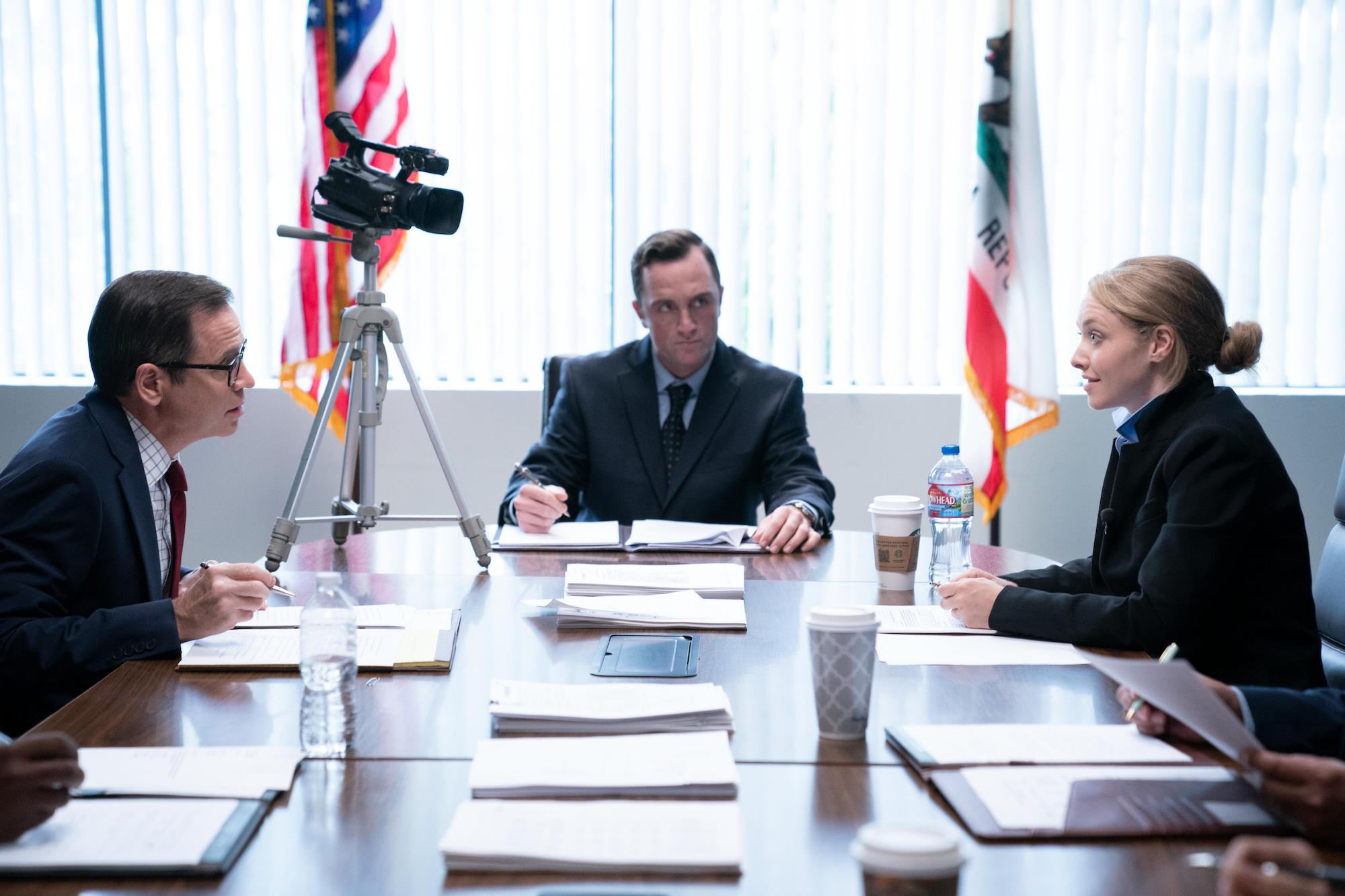 By the time the finale arrives, it’s almost a foregone conclusion that the company’s blood-testing regimen is doomed to fail. “Lizzy” is mainly a collection of moments where that reality sets in for the key players in this story, one by one. Whether it’s Elizabeth’s personal and professional partner Sunny Balwani (Naveen Andrews), her mother Noel (Elizabeth Marvel), or vocal board member George Shultz (Sam Waterston), you can see the resignation creep over their face as they start to realize what’s beyond the horizon.

“Most of my experience is comedy and comedies these days are just fast. They’re words, words, words, words. So having these quiet sequences with people tracking each other with no dialogue, watching people’s faces and eyes, it’s a very nice treat. The actors are doing it. I just have to get out of the way,” Welch said.

“The Dropout” has been something of a tonal blend from the start, mixing together the tragedy and absurdity that seemed to flow through every step of the company’s rise and fall. “Lizzy” sprinkles in a few extra flavors, including a few late-night office interactions between Elizabeth and Sunny that unfurl like a psychological thriller. With the fate of the company almost a foregone conclusion by the time the show hits Episode 8, Welch said that the Elizabeth/Sunny alliance was something that series creator/showrunner Elizabeth Meriwether (who’s a credited writer on the episode, along with Sofya Levitsky-Weitz) wanted to be a main focus.

“Liz really wanted this episode to be mostly about Elizabeth and Sunny and their relationship, almost as a proxy for Theranos coming down. Logistically, telling the story of every character we’ve been tracking at that point would have been confusing and difficult. But also, I think that’s the story that you would be tracking at this point,” Welch said. “The ‘What did you do Sunny? Did you do things that I didn’t know about?’ scene, that’s the key moment. That tension-release after everything’s already crumbled. It crumbles quietly in that scene. I did spend a lot of time on that trying to get it right. But again, it was acted beautifully, and it was shot beautifully, so I did not have to find that scene. That scene was there. My first cut was like, ‘How long can I stay on them? How long does it hold up, you just sitting there watching this one shot?’”

After sneaking away from managerial consequences for nearly the length of the show, the closest that “The Dropout” gets to a reckoning is the final conversation between Elizabeth and Theranos legal counsel Linda Tanner (Michaela Watkins). It’s a tricky mixture of scorn and empathy and dark humor that seems to be the whole episode in microcosm. 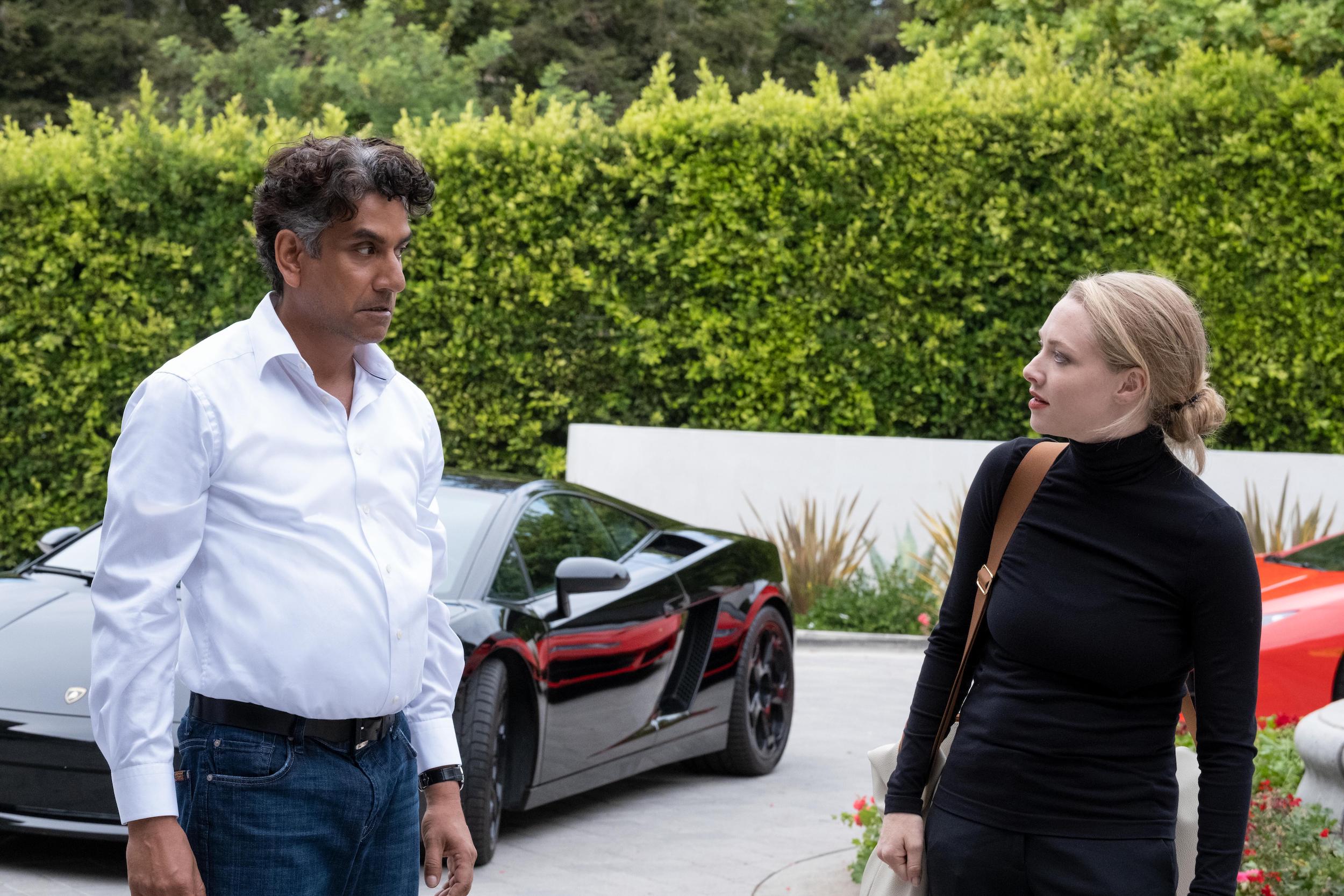 “There was actually a little bit more in that. We ended up cutting out her talking about her daughter dressing up as Elizabeth for Halloween because, ‘It’s easy. It’s just a turtleneck and a voice,’” Welch said. “Throughout the series, the actors understood that nobody was playing anything for laughs or for yucks or in any kind of joke rhythm. But you can’t get around the fact that it was just bananas what some people did and the blinders people put on themselves. The comedy just bubbled up naturally.”

But “The Dropout” saves its signature parting shot for the series’ final moments. Having ducked out of Theranos HQ for quite possibly the last time, waiting for a ride to come pick her up, she lets out a volley of primal screams. It’s as if all the anger and frustration and guilt that’s been bottled up for a decade comes flowing out in one massive chunk.

“That went through probably the most permutations of anything else in the episode. It started out very long and then it got really short and then ended up somewhere in the middle. In hindsight, it almost seems weird to say this, but I think Liz and I weren’t sure how much of it we’d earned at that point,” Welch said. “I had done a version that was real impressionistic. A lot of different screams, like her brain was breaking. Screams piled on top of each other. There was one version that was super short and very in the moment. She basically just screamed once, almost documentary-style. That didn’t feel quite satisfying enough. I always liked the part that we ended up with where she screams and then she turns and actually screams at the building. I would scream at that building, too.”

As soon as that catharsis arrives, it’s gone again. When her car shows up, “The Dropout” has enough patience to show Elizabeth go from anguished to carefree in the span of a few seconds. It’s one last example of how the show, particularly in this episode, gives its characters room to process the unprocessed.

“I guess it’s one of the luxuries of streaming. It was nice to not have not have any constraints as far as time or rhythm and just let it let it be what it was,” Welch said. “If this was a network show that had to be 41 minutes and somebody said, ‘Well, there’s a lot of pauses in that scene. Can you take some of them out?’ that would have broken my heart.”

“The Dropout” is now available to stream in its entirely on Hulu.