The Flip Side review: More message than mirth

The Flip Side is an Australian independent comedy shot in Adelaide. The one word that might not be strictly true there is "comedy". 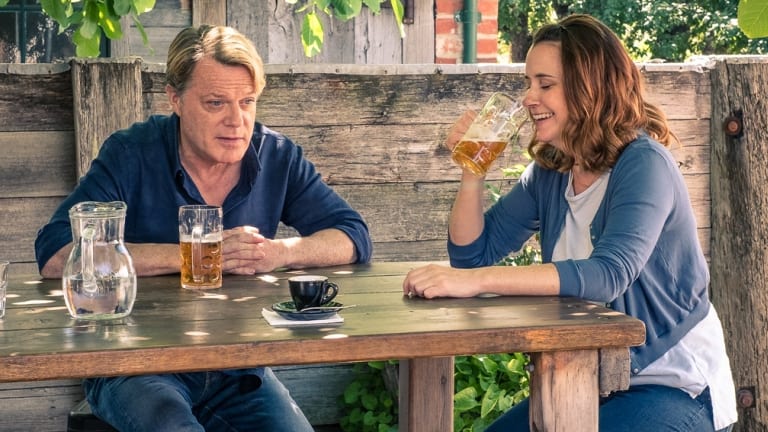 Short on laughs: Eddie Izzard and Emily Taheny in The Flip Side.

It's the first feature of experienced international movie executive Marion Pilowsky, who spent part of her childhood in the City of Churches.

The film grew partly out of the sense of dislocation she felt on returning to Adelaide after a couple of decades in London. She doesn't quite say it, but the film hinges on the question of disappointment, and a woman's longing for the bright lights of elsewhere.

The idea of "what if I had done things differently?" has universal appeal.

Veronica, aka Ronnie (comedian Emily Taheny) was once a chef on big-time movie shoots, which is where she fell in love with Henry Selbert (Eddie Izzard), a major star.

He asked her to come to London, then she never heard from him again. Five years later, in Adelaide, her restaurant is going broke, she can't pay the cost of keeping her dementing mother (Tina Bursill) in a nursing home, and her boyfriend Jeff (Luke McKenzie) lies around the house pretending to be a novelist, while he watches TV.

Ronnie is tired, stressed and feels like she's drowning. That's when Henry re-enters her life, with his gorgeous French assistant Sophie (Vanessa Guide), who's really his girlfriend. Jeff is star-struck, because he doesn't know Ronnie and Henry were lovers. Henry plays Jeff like a fiddle, praising his novel and dangling the possibility of international fame and fortune.

This might have been a decent premise for a comedy, but several things go wrong. There's no chemistry between Ronnie and Jeff, so we can't imagine what she sees in him. He's a dope, and therefore we wonder if she's a dope.

Actually, Taheny plays her as charming, resourceful, full of spirit – which just reinforces the problem of why she would bother with Jeff. Sophie and Henry arrive like fragrant Euro-trash, wearing too many clothes and an attitude of superiority.

Izzard oozes insincerity as well as charm in the role but he's underused here. French actress Guide dials her performance up to 11, threatening to topple the whole project.

That's where Pilowsky's lack of experience shows: she can't keep the performances in balance, which makes it hard to believe in the relationships.

There is some humour here, but barely enough to sustain the journey. Pilowsky tries hard to create a thoughtful comedy about grown-up dilemmas that will resonate with women – but the script isn't strong enough to carry the weight.

We end up with more message than mirth, and that's deadly for comedy.