Warning: This post contains major spoilers for The Haunting of Bly Manor‘s finale.

Just when Dani thought she was out, Bly Manor pulls her back in!

(And by that, we mean: under the lake water to her very sad death.)

“The Beast in the Jungle,” Episode 9 of Netflix’s The Haunting of Bly Manor, marks the end to the reign of actual terror that Viola Wingrave has held over her family home and its inhabitants for centuries. And similar to its predecessor The Haunting of Hill House, the last episode of the anthology’s second installment is marked by a lightness, happiness and a general sense of relief… until it’s not.

The hour opens with Mrs. Grose, now fully aware that she’s dead, lamenting that she can’t keep the children from danger because “I’m slipping away,” she tells the Owen of her memories. “I can feel it, even now.” She also confesses her love for him, lamenting that she didn’t tell the real him before it was too late. He urges her to leave the memory and go outside to try to stop what’s happening, in order to save the real him and everyone else. She does, but Viola takes no mind of her, literally walking through Hannah as she drags Dani into the house and up to Mr. and Mrs. Wingraves’ old bedroom.

Viola does notice Flora, however, seeing her as the daughter Viola had to leave behind when she died all those years ago. So she drops a gasping Dani, picks up Flora and carries her outside and back toward the lake. “I gave you your freedom, and you’re letting it drown,” Peter-in-Miles tells the ghost of Rebecca, who looks on in horror. The dead woman winds up wading in after Viola, promising Flora that if the little girl allows her to “tuck you away, one last time,” she’ll handle the agony of dying for her. 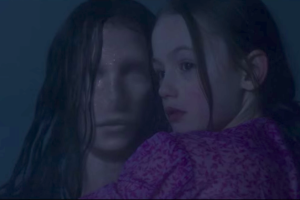 In the meantime, Henry, Jamie and Owen have arrived on the property. Viola kills Henry without stopping; his ghost instantly manifests next to his body. But it’s Dani who saves Flora by, at the very last moment, yelling the only thing that might possibly help: “It’s you, it’s me, it’s us!” — aka the invocation that allows the ghosts to take control of living bodies. “The au pair invited Violet into herself,” the narrator tells us, “and the invitation had been accepted.”

Owen is able to revive Henry via CPR. Meanwhile, all of Bly Manor’s ghosts, including Peter Quint and Rebecca Jessel, start to fade away. Miles comes to and is fine, albeit angry at Peter for tricking him. Owen wonders where Hannah is; he weeps when they find her body at the bottom of the well, the victim of what everyone thinks is an unfortunate accident.

As Henry prepares to move himself and the children to America, a very upset Dani confesses to Jamie that she feels like Viola is lying in wait in the back of her mind, and “at some point, she’s going to take me.” Jamie merely asks if Dani wants company while she waits; they relocate to Vermont, where they open a flower shop together and continue to happily date. “And that peace held for years,” the narrator tells us, “which is more than some of us ever get.” Eventually, though, Dani begins to see Viola’s featureless face in reflections.

But she keeps that a secret from Dani, to whom she proposes and eventually becomes legally wed. The pair travels to France to visit Owen at his restaurant; he is in contact with Henry and the children, and he reports that Miles and Flora have no recollection of any of the supernatural events that transpired when they lived at Bly.

Eventually, Dani lets her wife in on her secret terror: Viola is starting to take control. Jamie talks her down and they go to bed; in the morning, Dani is gone. “She could not risk the most important thing, her most important person, not for one more day,” the narrator says. 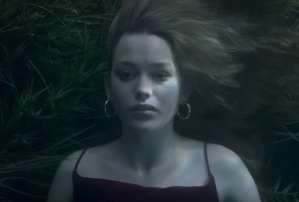 Jamie travels to Bly Manor, wades into the lake and finds Dani dead at the bottom in Viola’s old spot. (Hear what Victoria Pedretti had to say about playing another ill-fated Haunting heroine.)

And that brings the narrator to the end of her tale. When everyone but she and the bride-to-be have left, the younger woman says that the tale isn’t a ghost story, it’s actually a love story. “Same thing, really,” the narrator says. They talk a bit more about how loving someone is made scary by the thought of losing that person, then the bride-to-be notes that it’s odd that the little girl in the story was named Flora. “My middle name is Flora,” she says. “Is that right?” asks the narrator. 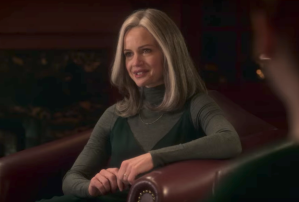 The next day, at the wedding reception, we learn that the narrator is Jamie. The bride is Flora. The man who gave the toast at the rehearsal dinner is Owen. Henry and Miles are there, as well. And that night, back at her hotel room, Jamie fills the sink and tub, leaves the door ajar and falls asleep in a chair facing the entryway, hoping to reunite with Dani once more.

Now it’s your turn. What did you think of the finale? Grade the episode — and the season on the whole — via the polls below, then hit the comments to flesh out your thoughts!