Warning: This post contains major spoilers from The Haunting of Bly Manor.

When the role of Bly Manor housekeeper Hannah Grose first came to T’Nia Miller‘s attention, she’d never watched The Haunting of Hill House. And nothing about Hannah, who is introduced as a demure, maternal presence early on in the Hill House follow-up The Haunting of Bly Manor, felt particularly exciting to the Sex Education actress.

“She was very nice, and I thought, ‘This is not really my kind of role,’” Miller tells TVLine. Still, she cued up Hill House in preparation for putting an audition on tape.. and wound up watching five episodes back-to-back. “Oh my God, I was blown away!” When she eventually made it through to the end of Mike Flanagan’s 2018 sleeper hit, “I was sobbing like a bitch,” she says, breaking into a loud laugh.

Little did Miller know, that very nice character would become one of the most tragic figures in the anthology’s second installment: In Episode 5, the audience learns that Hannah was killed during the events of Episode 1… though it takes her ghost a while to realize that she’s no longer among the living. And that makes her slow-motion love story with Rahul Kohli’s Owen all the sadder.

When TVLine chatted with Miller via Zoom, the conversation quickly turned to how even she didn’t know about Mrs. Grose’s big secret until she read that script. (And don’t worry: We got her to tell us what transpired in that whisper at the end of Episode 3.) 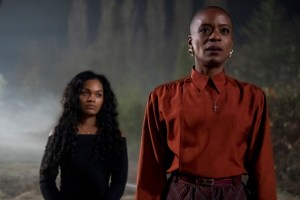 TVLINE | It’s so interesting to me that they didn’t think that was something that you needed to know ahead of time.
Mike [Flanagan] really is cheeky. He’s a cheeky bugger. He’s great. I love his sense of play and adventure… He’s a flirt. He’s a flirt with these scripts. He is teasing you and getting you all riled up and then, you’re like, “Oh.” That’s how he delivers. [Laughs] Not in that way! Oh, s–t. [Laughs]

TVLINE | There’s a logic to the ghosts at Bly Manor: They can’t leave the grounds, they can’t really touch things, they don’t change their clothes. Except Hannah is in a new, fabulous ensemble with amazing earrings every tie we see her, and she’s clearly doing things around the house. What do you think it is about her that a) she didn’t realize what had happened to her, and b) she was able to buck the trend?
I think it’s that real sense of the patriarch we actually have created, where women, especially modern women, we work, as well as we’re mothers. We have a career. We are so driven that we don’t often have time to think of ourselves… I know that’s treachery, because I have children of my own. And I think it’s just sheer will and determination that, no, [Miles and Flora are] not her children, but as far as she’s concerned, they are her children. This is her family, and she’s like a lioness. She will fight to the death, literally, Hannah, goes there for these kids.

And that’s just that determination, that strong will, that fierce loyalty and protectiveness over her family. And that [includes] Owen the chef, Jamie the gardener, and anyone who comes into that. You could be there for two minutes or have been there for 10 years. Once you’re a part of her inner circle, she’s fighting for you, and it’s that determination that allows her to have a physical manifestation to be able to doand to touch things in the real world and imagine what outfit she’s going to wear that day. [Laughs as she gestures to the very awesome earrings she’s wearing] You can tell, I love a big earring, as well. 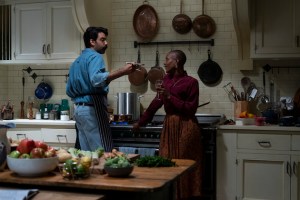 TVLINE | Owen and Hanna have such a lovely bond and such a sad, unrealized love story. First, I’m going to bug you to tell me what you whispered in his ear before he gets in the car after his mom died.
I can’t remember! [Laughs] It was something like, something cheesy, like “She’ll always be there,” or “I’m here. It’s all right. I’ve got you.” Something to those terms.

And [Rahul Kohli] said something really cheesy, as well. It had nothing to do with the text but something that’s really, probably really annoying, really dirty and annoying and sexual, dealing with a corpse. [Laughs] I can’t remember what it was.

TVLINE | When Hannah is tucked away in the memory of the day she interviewed Owen, he speaks quite sharply to her — though, obviously, this is all taking place in her head and is therefore her yelling at herself. Why do you think her mind chose him to be the one to snap her out of her denial?
It’s her. It’s her voice… It’s not as easy for her to sit in that place of denial, and I think it’s the same thing with age. You know, as we get older, our feelings and our ghosts will haunt us, which is why people have midlife crises, because they’re going through that and they’re, “Oh, s–t, I’ve got to look at myself and deal with myself.” And I think [that moment] is Hannah’s midlife crisis. He represents her place of comfort and security and love. And my god, does she love him, but she’s so scared.

TVLINE | Obviously this is incredibly hypothetical, but if she hadn’t died, do you think she could ever have made that jump and gone to Paris with him?
I do, because in her mind, she’s not dead — although she’s going through all that kind of stuff. And you know, would she have had the realization? It’s a hard one. 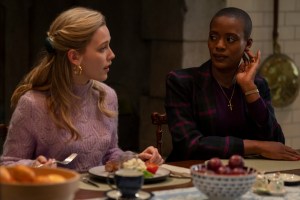 TVLINE | During the season, we learn that Hannah broke her neck when Peter-as-Miles pushed her down into the well. And throughout the episodes, you have her touching her neck absentmindedly. Was all of that scripted? Were you given free reign to put it into a scene?
Exactly. I have to say I wish that I came up with that, but it wasn’t me; it was Mike’s genius prank.