The Haves and the Have Nots Recap: Addressing the Situation — Plus, After All This Time, Is Charles Into Landon?

Thank goodness The Haves and the Have Nots’ Benny has never heard of Google, or this episode, in which he went from one source to the next in hopes of obtaining Derrick’s address, would’ve been five minutes long. When he wasn’t wishing someone had invented a magic book full of addresses — you know, like the white pages — Jeffrey and Colby offered Madison a seat (the hot one), a new man entered Hanna’s life (well, he was about to), and Veronica was paid a visit by… Actually, keep reading; I’ll tell you when we get there. 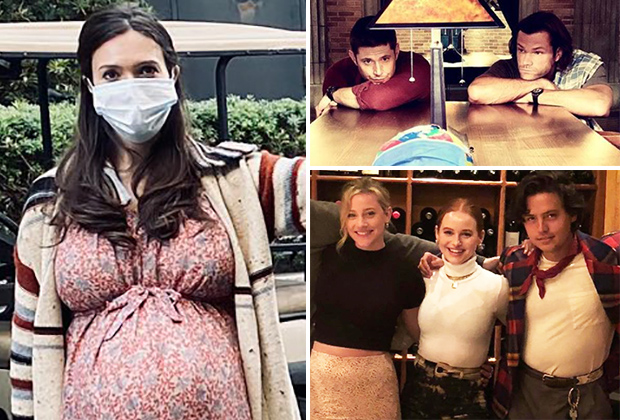 ‘WHEN HAVE YOU EVER KNOWN VERONICA TO PLAY GAMES?’ | As “No More Time” began, Veronica informed Benny over the phone that yes, she was sure that Derrick was the man who’d raped his mother. “He has a record as long as your penis,” she noted. But if he wanted Derrick’s address, he’d have to, ahem, come and get it. (That or Google the damn guy!) “Benny,” Veronica added before hanging up, “stay angry. It turns me on so much.” Honey, when it comes to Benny, everything turns you on! With that, Benny left the office of apparently the most disengaged realtor in the history of real estate. (Rianna did have Sandy calling her every other second, but come on… phones have “off” switches.) Before Benny arrived at Veronica’s, she was paid a visit by Celine, who needed $1,200 to pay her rent. And $200 for her light bill. Between disses, the lawyer — which it’s easy to forget Veronica is, she spends so much time leering at the pool boy — said that she’d go to the judge and get not just that pittance from Jim but $50k. “I was gonna tell you to try and look bad for the judge,” she added, but… uh… “Don’t look this bad. It looks like we’re trying too hard.”

When Benny showed up, Veronica took a break from throwing herself at Samuel to throw herself at him instead. “This dude raped my mother,” Benny noted, “and you wanna do this?” In fact, she did. Still, she eventually gave him her folder full of Derrick information — but not his address. “Your mom was very pretty,” she remarked, presumably having seen Hanna’s picture in the police report. “The years have not been kind to her. She looks like she’s been using her face for feet.” Finally, Benny had had enough and left, still wishing that the Internet had been invented to provide things like addresses. Meanwhile, behind bars, Katheryn was paid a visit by Chief Shepherd, who delighted in showing her how unimpressed he was by threats and her name. “Hey, everybody,” he set up the other inmates, “what’s her name?” In unison, they replied, “Katheryn Cryer,” clearly sick to death of her repeating it. Desperate to get sprung, Katheryn insisted that she hadn’t murdered Jennifer, Veronica had. Cool, Shepherd replied. If only the wheels of justice turned more quickly; as it was, she could be behind bars for months. “You shoulda given [the Malones] the money,” he whispered as she resumed her favorite prison hobby: wailing about Wyatt. 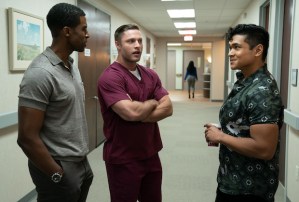 ‘YOU’RE A GREAT BIG BROTHER’ | At the Cryers’, Hanna, drowning in her new responsibilities as Katheryn’s executor, called Al, an accountant to whom she’d been referred by her pastor — actually, their pastor. He knew who she was. He’d seen her in church, he’d just “never had the nerve to say hello.” Anyway, he said that he’d be glad to help Hanna make sense of all the financial-ese in exchange for a cup of coffee. (David, you best get in there before you have a rival!) At Justin’s, the gay cop promised Tanner that he was done fooling around with men. Somehow, this satisfied Tanner, even though Justin hadn’t taken down a single photo from his “I Heart Jeffrey” stalker wall. At the hospital, as Jim’s assistant — you know, David — filled him in on what had gone down at the Iron Bone, they learned that Wyatt’s car had been moved to a parking lot near the loft. I’ll check that right out, said David, adding that, you betcha, he’d look in on Katheryn as well. When Dr. Danny stopped in, he apologized for the fact that he didn’t have a magic pill that he could give Jim and send him home. “You do have a magic pill,” the patient replied, “it’s called a painkiller.” Kidding aside, he’d be glad to take the doc up on his offer to get Wyatt some help once he was found.

Elsewhere in the hospital, Jeffrey enjoyed every second of setting Madison up for his big Colby reveal. “Colby, were you naked in my apartment?” the nurse asked his ex. Apparently, Madison wasn’t cheating on Jeffrey, Colby just hadn’t realized that, in Madison’s mind, he had someone. Mortified, Madison pushed the elevator button a zillion times in hopes of escaping. “Pressing it harder isn’t going to make it come any faster,” Jeffrey said. “No,” Colby replied, “it usually does.” (Colby’s a hoot — a mischievous imp!) At the Iron Bone, Sandy, day-drinking away his shattering basement experience, blamed his predicament on Mitch; if he’d joined “the family” like he’d been supposed to, they wouldn’t be so hot for Sandy to succeed Vinny. The cousins probably would’ve gone on squabbling till Happy Hour, too, had Benny not come by to confront Mitch about his Derrick lie and — wait for it — ask for the rapist’s address. Oh, Benny, we know you know how to Google; why aren’t you doing that? 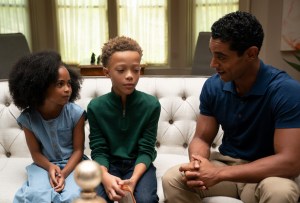 ‘YOUR DAD WILL PARDON A TURKEY’ | At Charles’, the president-elect and Landon got the future First Kids excited about life in the White House. Afterwards, Charles sincerely thanked his right-hand man for his devotion… but wanted to make sure of one thing: “You’re not hoping that one day we’ll be together, are you?” Yeah, cute as you are, no, Landon replied. Was Charles “asking me these things because you’re having feelings for me?” Yeah, cute as you are, also no. He was just grateful to have a wingman that he could trust. As for Landon, he was happy to have a guy friend. Off their sweet exchange, Oliver oozed out of the woodwork to reveal that (of course!) he’d been eavesdropping. “You know what I’ve been meaning to tell you?” said Landon. “Absolutely nothing.” So Oliver flapped his jaws, revealing that Candace was staying at a fancy hotel — and had been visited by Mitch. “It sure didn’t take her long to get over” Charles, Landon snarked. She’d also gone to the drugstore. If I were Landon, I would’ve had to ask the obvious followup question: Why? But he was so eager to be rid of Oliver that he didn’t.

As the episode drew to a close, Benny showed up at the Cryers’ and banged on the door as if he wasn’t aware that each of his biceps was the width of a tree trunk, and he was pounding on glass. After revealing to Hanna that Veronica had told him the identity of his mother’s rapist, he continued to behave as if he’d never heard of the Internet or dialing 411 — and on top of that had totally forgotten that Alissa’s friend had told him what street Derrick lived on! When his mom refused to tell him what he already knew and shut the door on him, he smoldered on the porch for a moment, then spotted pulling into the driveway — what are the odds? — Derrick. Maybe Benny could get Derrick to tell him where he lived! That, or beat him to within an inch of his life. That seemed more likely. What did you think of “No More Time”? Hit the comments with your reactions, critiques, questions — you name it!