Note: The following article contains discussion of themes including suicide that some readers may find upsetting.

After scepticism and delays aplenty, the small-screen remake of iconic ’80s film Heathers finally arrived in the US yesterday (October 25).

The nine-episode reboot, which had its finale scrapped entirely, was originally scheduled to air in February of this year but was pushed back after a deadly shooting in Parkland, Florida. 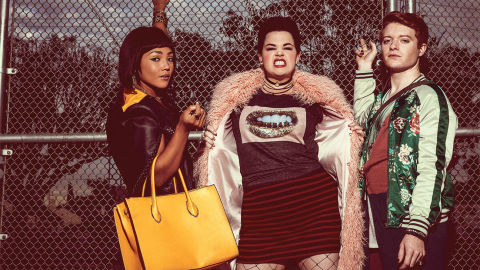 Now, eight months later, the controversial series finally had its premiere – and guess what? Those “creative risks” were just as divisive as expected.

Some viewers took particular issue with the over-dramatised and drawn-out suicide of Melanie Field’s Heather Chandler, with fans calling it “problematic” and “triggering”.

Despite others arguing that Heathers is meant to be satirical and deliberately melodramatic, many fans of the original were just generally unconvinced by Paramount’s remake.

“This new Heathers is the worst thing I’ve ever seen. Further proof sequels, prequels, and remakes are terrible ideas,” one wrote.

Another agreed: “The new #Heathers is not good and I don’t like it.”

Hey, at least it’s not all bad news, though…

We would encourage anyone who identifies with the topics raised in this article to reach out. Organisations who can offer support include Samaritans on 116 123 (www.samaritans.org), and Mind on 0300 123 3393 (www.mind.org.uk).