You’d think it’d be pretty cool to be an Eternal. After seeing Eternals — Marvel Studios’ latest movie, out Nov. 5 — I’m not so sure. In the first place, you’re immortal, or something like it, which on the upside means you get a front seat to the slow but steady ascension of human civilization. The trade-off is that the fellow Eternal you dated for 5,000 or so years, who left you for no reason, will be your coworker for life — forever. You’re also stuck with the human form you were given at the outset, which is great news if you’re hot in an eternally-recognizable, Western Civ 101 sort of way, but a pretty shitty deal if you, a verified superbeing, were born into the body of a pubescent (read: moody) 12-year-old.

Kumail Nanjiani on Becoming A Superhero: 'I Wish Nobody Would Ever Talk About My Body Again'

And your boss sucks. Hierarchy and teamwork are your bag, so you can’t really question why it is that you take orders from a sentient boombox in the sky. Or why you’ve been saddled with refurbished Power Rangers costumes for eternity. Or why you have to follow so many rules regarding the do’s and don’ts of your time on Earth, the most prominent being: Don’t intervene. Colonialism, genocide, global warming, atomic bombs. Shit hits the fan about a thousand times per century and, despite having the power to stop it, you can’t — it’s not your place. Thanos, schmanos: Not your problem. Your sole purpose is to battle the so-called Deviants, those skinless, reptilian beasts with ribboned musculature and a newfound taste for Eternal blood. Deviate from that plan and the galactic boombox, better known as Arishem the Judge, will get you. Finish the assignment a few centuries early, and you’ll nevertheless remain deployed on Earth, beholden to its rules — just in case the job isn’t really finished.

It’s enough to drive an Eternal mad. And in fact, the Eternals’ minds are at constant risk of cracking under the pressure of all that history and — will no one admit it? — boredom. No amount of emphatic emotionalism, heroic grandstanding, or Instagrammable, earthbound beauty can distract from this fact. But Eternals, which was directed by Chloé Zhao, certainly tries — ad nauseam — to make the case. Zhao’s movie, co-written by the director with Patrick Burleigh, Ryan Firpo, and Kaz Firpo, rightly sees this franchise as the globe-trotting, centuries-spanning epic that it is. It tries to take us everywhere, give us glimpses of everything, from Mesopotamia in 5000 BC; to Tenochtitlan in the 1520s, overrun by an invading Spain; to the Hiroshima of 1945, just minutes after the bomb; to present-day Alaska, Mumbai, South Dakota, London, Iraq. Only spy capers and travel guides rival this movie’s global reach. But even they can’t treat you to the site of Deviants going full-on Jurassic Park on a gang of hapless Neanderthals.

Eternals stars Salma Hayek, Angelina Jolie, Gemma Chan, Richard Madden, Kumail Nanjiani, Brian Tyree Henry, Lauren Ridloff, Barry Keoghan, Don Lee, and Lia McHugh — the youngster of the bunch — as our titular superheroes. All are imbued with distinct powers and attitudes and suggestively familiar names: Thena, Ikaris, Gilgamesh. It would seem that the Eternals are not only Earth’s protectors (Avengers notwithstanding); they’re the inspirations for some of its most enduring, godly myths. Hence the opportunities afforded by a central cast this large and varied, whose personalities can’t help but pull the movie in as many different directions as there are stars. Jolie, as Thena — a warrior goddess who fights with weapons made of cosmic energy — gets to hero-pose her way through action scenes in ways that only Jolie can make look good. Lee’s Gilgamesh brings the fearsome fists; Henry’s Phastos has a genius mind for engineering. The leader of the group, Ajak (Hayek), gets to call the shots and react to things with significant facial expressions. The leaders of the movie are Ikaris (Madden), who can fly (duh) and shoot destructive beams from his eyes, and Sersi (Chan), who can manipulate matter at will. 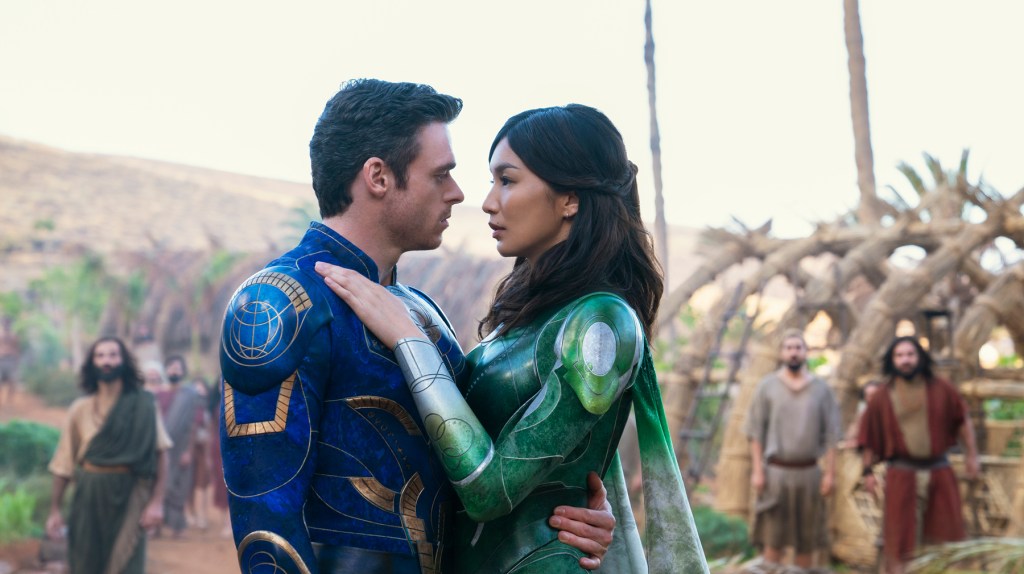 Richard Madden as Ikaris and Gemma Chan as Sersi in ‘Eternals.’

Not that this is how they spend their days, nowadays. While Kingo (Nanjiani) is off in Mumbai fashioning himself into a one-man dynasty of Bollywood icons, Druig (Keoghan), a controller of minds, hides out in a jungle with a colony of laborers in his keep, and Makkari (Ridloff) — the MCU’s first deaf superhero and, for my money, the smartest Eternal of the lot — hides out in the supergroup’s spaceship to wait out the centuries until it’s time to go home.

If only it were that simple. You can’t go home again — isn’t that the line? It’s no spoiler to say that “waiting it out” eventually ceases to be an option; humanity must come under threat, a threat worse than even Thanos, otherwise there’d be no movie. As it is, there’s barely a movie to begin with. Somehow, despite all the nods toward emotional complexity and women’s empowerment, all the caring, cross-cultural gestures of goodwill, the movie whittles itself down to the obvious inner and outer battles, a tepid romantic drama that goes nowhere, and group dynamics that peaked circa the first few Fast & Furious movies: “family,” teamwork, faith in humanity despite the actual inclinations of the humans in question. Eternals is a movie full of opportunities, most of which it sidesteps in favor of its least charismatic heroes, its least interesting questions. Some of this is the fault of a redundant emotional structure that takes the audience’s intelligence for granted. At one point, we get a trio of scenes in which, after someone dies, the gang must get back together after years of living normal human lives, and, with each member of the team that gets reintroduced to the story, we get a ritualistic repetition of a deadening dramatic pattern. Someone breaks the news; someone else mourns the news; then everyone rallies, heading off to the next exotic locale to ruin the yet another person’s day. It’s like a game of telephone in which the message being passed on is simply the sound of someone’s slobbery weeping.

I’d been curious to see what Zhao, who up to this point has worked in a domain far afield from the Marvel Universe, would bring to a movie of this scope. Her previous films got attention for their mix of documentary realism — down to the use of nonprofessional actors — and the more movie-ish style of indie drama that earned her a regular spot on the Sundance roster. They were defined by the director’s insistence on immersion. Songs My Brothers Taught Me (2015) and The Rider (2017) were both filmed on the Pine Ridge Indian Reservation, in South Dakota, with locals often playing versions of themselves. The best picture-winning Nomadland (2020), fronted by Oscar winner Frances McDormand and set among the modern southwest’s real-life nomads, co-starred some of the same people who’d lent their life stories to Jessica Bruder’s book, Nomadland: Surviving America in the Twenty-First Century, on which Zhao’s film was based. These movies hit and miss, but Zhao’s visual style — her instinctive reimagining of the Western genre’s hero-posing vistas and natural environments — became a hallmark.

Much of that style carries over into Eternals — where it gets exposed, more plainly than before, as a kind of cultural tourism. Mesopotamia, Iraq, indigenous empires: They’re all mere backdrop to the Eternals’ ability to engage with these cultures, learn the languages, feast on the riches of ancient history in beautified montages of the cast’s most attractive actors doing Attractive People things. After the U.S. decimates Hiroshima, what we get is — nothing. Zhao’s Hiroshima feels more akin to present-day Chernoybl, a ghost city, all of the suffering in the wake of the bomb completely absent, all of the actual victims of history evaporated, as if Thanos, not an atomic bomb, had wreaked this havoc. Everything has been cleared out of the way but for a pair of weeping Eternals questioning the destructive path human progress has taken. It’s an easier portrait to paint if the actual human toll is neatly cropped out of the picture.

This would matter less in a movie less cumbersome on the humanitarian front — a movie in which saving Earth, weighing the one versus the many, thwarting deep, dark, intergalactic plans of total destruction, wasn’t such a tiresome, single-minded pursuit. Or a movie that didn’t go so far out of its way to beautify the Eternals’ ostensible empathy for humanity with indigenous cultural props hovering around in the background. They’re a part of this planet, after all, these alien saviors of ours. Yet their interactions with it are laughably limited; the idea that any of them care enough about Earth to want to save it is so taken for granted that merely asking the question makes the movie fall apart. Zhao’s camera is often positioned just below the eyeline of her heroes, who fall into picturesque V-formations out of habit, ever-ready for their class photo: a guaranteed promotional meme. It leaves the impression of a humanity looking up to these gods, this veritable goof troop in their god-awful, color-coded suits. So: Where’s humanity? Who’s doing all that looking? I’m not asking for more no-line extras in exotic costumes or more bit parts written for boyfriend characters. I’m asking about actual people.

Not that the Eternals — who get jerked through the movie’s banal melodramas, same-old action sequences, and snoozy central romance — are exactly triumphs of characterization. One character stabbing another in the back (literally, not figuratively) proves one of the more surprising turns in the movie. But the psychological seeds of that act are so loudly and nonsensically signaled that there’s nothing satisfying about it. The most interesting things about these heroes are their moral predicaments, both those that they share as a group and those that arise as a consequence of their individual powers. There’s a Celestial (capital C, as this is another class of superbeing) system of checks and balances at play in this story, in which the Eternals prove a crucial cog. This occasionally results in problems worth dwelling on — which the movie has little time to do, what with all the predictable emotional beats it’s too busy hitting, all the hero poses yet left to strike.

“You do not turn against your family,” one of our heroes eventually shouts. Spoken like a true alien; real families, or at least the kinds worth watching movies about, embrace their dysfunction. Yet even when the Eternals fight amongst themselves, they’re boring about it. Eternals is so busy showing off what it can do, where it can go, that it bypasses and overlooks what it really has to offer. There are real dilemmas, real battles of interest buried beneath the soft-pedaled, naturally-lit, cozy surfaces of this movie. But like everything of genuine interest here, those strands are the supporting players to a tired lead act — much in the way that the couple with actual chemistry in this movie takes a constant backseat to its Hot, Boring Leads. Eternals is good at telling us where to look, at impressing us with its manufactured sense of grandeur. What it lacks is any credible sense of what’s actually worth seeing.