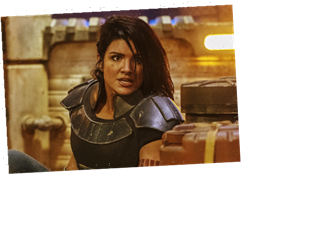 “Gina Carano is not currently employed by Lucasfilm and there are no plans for her to be in the future,” a Lucasfilm representative said in a statement to our sister site Deadline. “Nevertheless, her social media posts denigrating people based on their cultural and religious identities are abhorrent and unacceptable.”

Formerly a mixed martial artist, Carano has been under fire from many fans for quite a while now, due to problematic things she has said/opinions she has supported all across social media. Carano has alternately been accused of being anti-trans (in part by appearing to mock the use of chosen pronouns), racist, anti-mask/anti-vaxxer, and a supporter of the attempted Jan. 6 insurrection at the U.S. Capitol, among other things.

Most recently, an Instagram post of hers was interpreted to be an antisemitic defense of Nazis (stating that Jews in World War II were not beaten by German soldiers but “by their neighbors”). Though some argued her post was by no means absolving Nazis of wrongdoing, the #FireGinaCarano hashtag got trending again, with many asking Lucasfilm and Mandalorian EP Jon Favreau to oust Carano. The Mandalorian was due to start production on Season 3 as soon as filming of offshoot The Book of Boba Fett had wrapped.