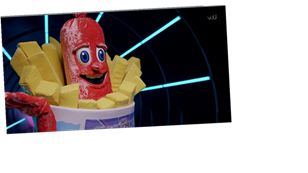 The Masked Singer UK returned to our screens on Saturday and fans are convinced they've worked out the famous face behind the Sausage mask.

The wacky character performed a rendition of Jenifer Hudson's And I Am Telling You during the latest episode of the ITV guessing game show.

In the VT before her performance, the unknown female celebrity said: "The thing about Sausages is that they can be gourmet or no-nonsense. I am definitely the latter.

"I love a bit of the simple life. I don't need a glam party and I more than happy with some potato snacks."

After witnessing Sausage take to the stage for the second time, viewers are certain that Sheridan Smith is behind the Sausage.

A third person pointed out: "Sheridan Smith recorded And I’m Telling You I’m Not Going "

While a fourth fan wrote: "Think we’re all certain that Sausage is Sheridan Smith."

Sausage made a change to her newspaper wrapping, and fans are sure to notice the difference as she takes to the stage tonight.

On the newspaper wrapped around their sausage shape, the headline has changed to "Sausage batters Badger," referring to another of the characters.

The secret celeb also dropped a major clue during her game of two lies and a truth with host Joel Dommett.

"My hair colour is certified by law," said Sausage as one of her clues.

Talk show king Jonathan quickly realised that it could mean Legally Blonde, a musical which Sheridan appeared in recently.

However, other viewers think that Sausage could be Loose Women star Stacey Solomon or singer Emeli Sande.

The Masked Singer UK continues on ITV at 7pm