‘The Secret Life of Pets 2’ Review: A Silly and Sweet Sequel That Should Be Put on a Leash

There are, somehow, three entire plotlines that drive Chris Renaud’s fizzy, frequently silly “The Secret Life of Pets 2,” a worthy if slightly less delightful sequel to the director’s 2016 animated hit. First, there’s the life-lesson-heavy story that centers around ostensible franchise star Max (a Jack Russell Terrier, now voiced by Patton Oswalt, replacing original star Louis C.K. for obvious reasons) as he deals with crippling anxiety after a major life change. Then, there’s the wacky tale of Max’s love interest (go with it), bubbly Pomeranian Gidget (Jenny Slate), tasked with caring for Max’s cherished toy while he embarks on a trip, only to lose it in a terrifying apartment filled with cats.

So far, so cute, but there’s the third story: Bonzo bunny Snowball (Kevin Hart), believing he is an actual superhero, joins forces with newbie Shih Tzu Daisy (Tiffany Haddish) to save an abused white tiger cub from a very, very evil circus. For a franchise that’s literally about the joys of captive (but loved!) animals, a hardline stance against circuses is surprising although not wholly unwelcome. But in a film bursting with plot and a little short on narrative twists, the storylines don’t always add up. Finally, a third-act train sequence that cribs liberally from “Paddington 2” signals the truth: These pets need to be put on a leash.

Renaud’s first “Pets” pulled similar tricks but made relative sense. For all its wacky diversions, “The Secret Life of Pets” started as a series about Max, who has always been a little neurotic in ways that speak to both adult viewers and fussier kids. In the first film, Max’s beloved owner Katie (Ellie Kemper) unexpectedly brought home a new canine pal, the wonderfully relaxed Newfie mix Duke (Eric Stonestreet). As Max grappled with the intrusion on his life, he learned important lessons, grew as a character, and spent a worrying amount of time in a sewer with the always-insane Snowball. 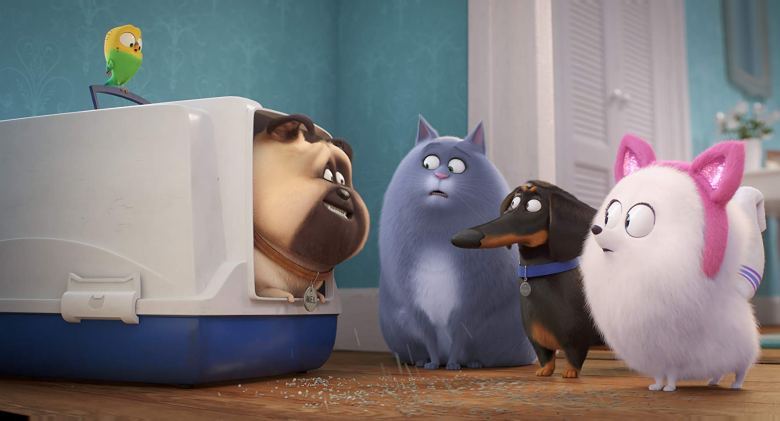 “The Secret Life of Pets 2”

Here, Max’s story takes a strange backseat to the insanity unfolding among the other sassy pets in his building. This time, Max is dealing with the introduction of Katie’s new husband and their cute baby, who in the film’s opening minutes, goes from being Max and Duke’s greatest foe to their dearest love. Beset by worry for the little guy, Max again needs to, well, learn some lessons, grow as a character, and spend some serious time with a new pal: Harrison Ford’s gruff farm dog Rooster (perfect casting).

The sequel remains charming, beautifully animated, and often incredibly funny, but there’s a sense that writer Brian Lynch realized Max’s story needed a lot more padding this time around. Enter: Gidget and the crazy cats, Snowball, Daisy, and a blackout-dark circus. The most winning returning star is Lake Bell’s aces cat Chloe, the franchise’s most hilariously realistic feline. (Puking hairballs, sleeping a lot, hating everyone — Chloe’s got it all.) The film energetically flips between the stories, though the resulting disconnects create an episodic sensibility that never plagued the original. 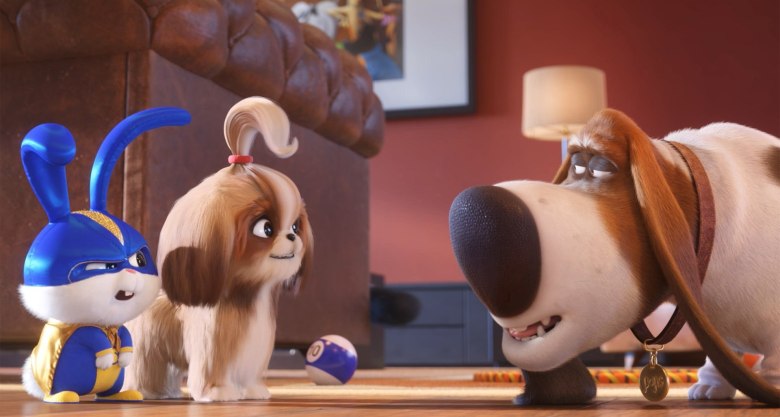 “The Secret Life of Pets 2”

For all its silly, out-there ideas, “The Secret Life of Pets 2” is at its best when sticking to the franchise premise that there’s an entire internal life of our beloved pets that we can know nothing about. It’s simple, but it’s effective, and the imagination that fuels the series’ furry and frisky characters makes it fine entertainment for anyone who ever gazed at a pup or kitten and wondered what the hell they were thinking. Turns out, they were plotting to overthrow an evil circus.

Universal Pictures and Illumination will release “The Secret Life of Pets 2” in theaters on Friday, June 7.