This week’s This Is Us opens on a little girl named Lin, who speaks Vietnamese with her grandfather as they fish. He counsels her to be patient, then continues the lesson in English while he cooks up her catch. It seems like Grandpa lives on a boat, maybe? Also, in that way that This Is Us loves, their clothing and hairstyles make it hard to tell what era we’re in. Is it a flashback? A flash-forward? A new storyline in the present? It’s anyone’s guess! (But if I missed an errant Apple Watch or some other concrete clue, please do shout it out in the comments.)

Anyway, the most important part of this little interlude with the new characters is that the conversation eventually turns to showing people love through food. And when Lin (cutely) badgers her grandfather about whether he was trying to use his cooking to impress the woman “in all the pictures,” he smiles and says yes. Then the camera pans to a photo of Grandpa — when he was a bit younger — cozying up to Laurel.

That’s all we get on the Ongoing Adventures of Randall’s Birth Mom this week, but the rest of the episode is filled with puberty, ill-advised face masks and microaggressions… so read on for the fun!

SILENT WATERS | In the flashback, The Big Three hit puberty. For Kevin, this means becoming preoccupied with bulking up for the school football team, a goal that Jack tacitly condones by taking his son out to the garage to “pump some iron” the same way that his father did. (Well, with a little less of a mean edge, but not altogether all that different, actually.) For Kate, this means perseverating about the meaning behind her former crush’s eagerness to be part of her group science project. And for Randall, this means getting hit on by Kate’s white friend, Tanya, which is comedically awkward until she tells him, “I always wondered what it would be like to kiss someone like you.” Ugh. 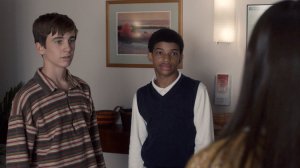 Of course, Randall absorbs this slight, the way he always absorbs the hurts slung at him. And when Rebecca stops by his room later that night, confessing that she’d been too involved in Kate’s study-group drama to pay much attention to how his afternoon went, he tells her everything was fine and quickly goes back to his homework. It’s so sad.

RANDALL FINDS HIS MAN | Randall interviews a bunch of new therapists before settling on one that’s male, Black, about his age and a father. “He checks all the boxes, Beth,” Randall says, adding that they’re going to have a longer Zoom session later that day. But during that extended conversation, Randall is even more awkward than usual. After he admits that he’s nervous, the shrink reminds him that a lot of their work will happen outside of the session. Then he asks Randall to write down a story from his childhood, and they’ll discuss it at their next meeting.

After their talk, Randall comes downstairs to deal with the day’s next crisis: During the prior school year, Tessa and her friend Alex made a music video railing against injustices they’ve experienced — specifically, a teacher using the wrong pronouns to refer Alex (who prefers “they”), and another teacher touching Tess’ hair and the hair of other Black students. The kids yell “Screw you!” a lot, and Randall and Beth tell their daughter that this is not the way to go about making her point. But she pushes back: “This is who I want to be. This is who I am,” she says, adding that they raised her to do what she thinks is right. 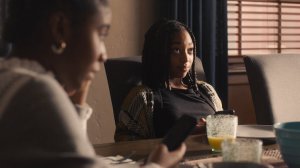 “Part of me is kind of proud of her,” Randall admits to Beth later, noting that at Tess’ age, he swallowed things that bothered him rather than speaking up about them. “All of a sudden, she’s coming into her own.” Still, Beth points out, there has got to be repercussions for her actions. So they take away her phone and ground her for six weeks, and she calls them fascists. (Heh.)

Later that night, Randall writes down the story of Tanya trying to kiss him — and what she said after — then places the journal on his bedside table, next to the bound book of poems William wrote. 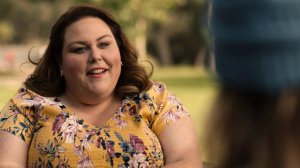 ARE YOU OUR MAMA? | Kate and Toby meet Ellie, whose baby they may potentially adopt, in a public park. They all hit it off right away, geeking out about Pennsylvania and Buffy the Vampire Slayer in the first few minutes. She tells them that she was married to her high school sweetheart and they had a daughter eight years ago, but he died of cancer. And when she finally got back into the dating scene, she drank a little too much on one date and wound up pregnant. “This baby will do better if she is raised elsewhere, with parents who really want her.”

They eventually drive her home, and witnessing the Damons’ not-serious fight about diapers seems to seal something for Ellie; she says she has a “strong feeling” about them, then they part ways. At home, Toby warns Kate not to get too excited… but it’s clear that he’s pretty excited about Ellie, himself. 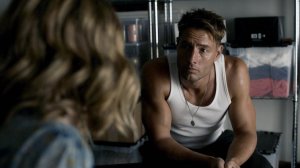 ‘THE LAWYER WITH THE GLASS EYE?’ | Kevin and Madison continue to act like polite strangers in front of each other, though she does make him pancakes for breakfast after his morning workout. Just then, though, he gets notification that he’s just about landed a part in a big legal movie. “The lawyer with the glass eye?” Madison asks, but Kev corrects her that the film is called The Glass Eye and his character has two regular ol’ eyes… as well as a couple of shirtless sex scenes. Pushing away the flapjacks, he says he’ll likely stick to lean chicken and water for the foreseeable future, and this seems to make Madison upset.

Kevin assumes that she doesn’t want him to be near-naked with another woman, but that’s not what’s bugging her. Eventually, she admits that she’s got a lot of stuff — like her history with an eating disorder — that she’d rather not share with him, given that they barely know each other outside of the biblical sense. Eventually, though, she starts to open up. She talks about she keeps the photo of their babies’ ultrasound on the refrigerator door “to remind me to eat,” and that she’s hiding a lot of herself from him.

Kevin says he was oblivious — which, shocker — and eventually tells her that he is probably a little too concerned with weight and body image, too. “I count calories, too, Madison,” he says when she finds him putting in even more time in their garage gym. He points out that his career was built on his taking off his shirt, and now that he’s not drinking, he’s using workouts as a not-as-bad-but-also-not-super-healthy substitute. “I got stuff, too, Madison. I got a lot of stuff,” he says sadly, adding that he worries he’s going to pass those issues onto their kids. After all, “I had the greatest, most connected parents you can imagine, and they missed so much.”

So they start trading confessions. Bulimia almost killed her when she was a teenager. He has massive daddy issues. “Also?,” she adds, the mood lightening considerably, “I’m obsessed with the show Outlander. I’ve gone to conventions.” Och, look at little Madison, letting her Sassenach flag fly!

Now it’s your turn. What did you think of the episode? Got any updated theories about Randall’s mother? Hit the comments!