'This Is Us’ Season 4: Kate’s Trilogy Episode Will Leave Her Life Changed Forever

The mystery behind young Kate (Hannah Zeile) and Marc’s (Austin Abrams) relationship will finally be unveiled in This Is Us Season 4 Episode 13. Kate’s (Chrissy Metz) Big Three trilogy episode, titled “A Hell of a Week: Part Three,” follows Kevin (Justin Hartley) and Randall’s (Sterling K. Brown) solo arcs. And simply judging from the first two installments, Kate’s storyline is about to expand in ways unimaginable. So what does the This Is Us team have in store for viewers after a two-week hiatus? According to the cast and crew, the teenage Kate we know and love will leave for good on Feb. 11.

Marc is escargot. What do you think goes down in Kate's chapter of The Big Three Trilogy?

Throughout the fourth season of This Is Us, the writers built Marc and Kate’s relationship. The couple meets in “Flip a Coin,” where Marc offered Kate a job at a record store.

Later, in “Storybook Love,” Marc arrives unannounced at a Pearson family dinner. He also introduces himself as Kate’s boyfriend. Both instances are used to highlight Marc’s character, according to executive producer Elizabeth Berger in an interview with Entertainment Weekly.

“That will definitely prove to be symbolic of Marc’s larger personality,” Berger said. “He’s obviously somebody that goes for what he wants and feels entitled to show up to a place even when he’s not invited. And we do feel like that is a little bit of a tell for where we’re going and what this guy is all about.”

Later, in the present day, Kate and Rebecca (Mandy Moore) find Polaroids from the dinner. They seem to enjoy the memories up until Kate uncovers a photo with Marc, her smile instantly disappearing.

When Rebecca tells you to shut up and enjoy your burnt dinner, you listen. #ThisIsUs

“I was trying so hard to hold it together that year after your father died,” Rebecca tells Kate. She then admits she just wanted to believe her children were happy. And in the end, she “didn’t see what was happening.”

Then s speaking with Entertainment Weekly, executive producer Isaac Aptaker confirmed This Is Us fans should be worried about Kate.

“Fans should have a healthy amount of concern,” Aptaker said. “I mean, there’s something ominous looming there, the way that Rebecca and Kate are speaking about that relationship in the present day. And although he seems like a sweet guy now, it certainly seems like that did not end well for Kate.”

Now, viewers haven’t seen much of Kate and Marc since “Storybook Love.” Of course, Kate’s boyfriend has popped up a few times in passing. However, the moments are always a bit alarming. It’s also clear the Pearson family doesn’t approve of their relationship.

In Kevin and Randall’s “Hell of a Week” episodes, Kate gets in a fight with Marc on the phone. She wonders why he is mad at her. Meanwhile, teenage Kevin (Logan Shroyer) and Randall (Niles Fitch) are left confused why Kate is still together with the “greaseball” known as Marc.

By the end of both episodes, fans are growing more concerned about Kate. The Big Three are all back in town to celebrate Rebecca’s birthday. However, dinner is canceled and something is very wrong. 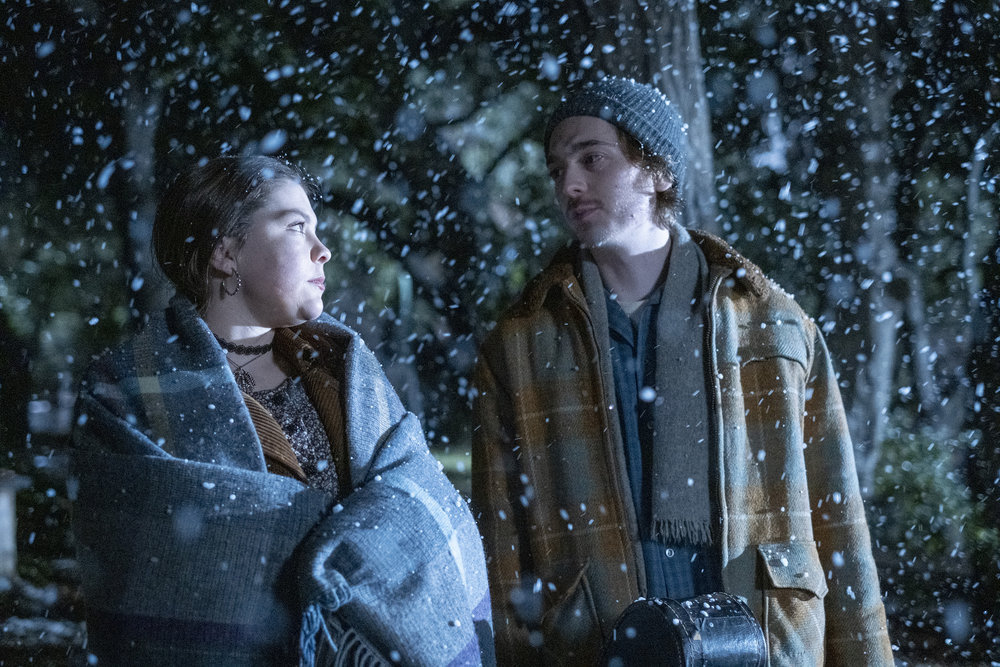 “I’m worried about Kate,” Rebecca tells Kevin. “She rode off with Marc to the cabin. She just called me crying. I think she’s in trouble, Kev. We have to go get her.”

Then in the promo for This Is Us Season 4 Episode 13, things start to come together. Viewers see a glimpse of Kate and Rebecca’s argument. At first, Rebecca says she isn’t comfortable with Marc. “I don’t need you to like him, I like him,” Kate says.

The trailer flashed forward to Marc and Kate having another argument. It seems they’re in the middle of the woods. But then Marc kicks Kate out of his car.

“I can’t even look at your face,” he yells, throwing her jacket out the door. The This Is Us preview ends with Marc leaving Kate, stranded in the middle of the night.

On Feb. 4, Shroyer opened up about his This Is Us character’s twin sister, revealing Kate’s trilogy episode will change her forever.

“It’s a big deal what happens, especially in this episode and the coming episodes,” Shroyer said. “It definitely changes Kate’s life.”

The actor also shared Kevin may have to step up his game to support his family.

“I wouldn’t say Kate and Kevin are super aligned right now,” Shroyer said. “Their relationship is fundamental to who they are and we start to see some more adult shoes that Kevin has to fill.”

Meanwhile, when speaking with Entertainment Weekly in November 2019, Aptaker and Berger touched on the toll Kate’s relationship with Marc will have on her in the long run.

“Kate is now 39 years old and a highly functioning woman, so she got out of the relationship somewhat unscathed in the long run,” Berger said. “But I think it was definitely a formative relationship and it was a relationship that left serious emotional wounds.”

Aptaker added, “It definitely goes to a unhealthy place that’s going to make a real impact on Kate and stay with her over the years.”

So how will Marc’s behavior actually affect teen Kate in the future? In a separate interview with Entertainment Weekly, Berger hinted something may parallel with Kate’s marriage with Toby (Chris Sullivan). She said:

I think all of those intense teenage relationships tend to stick with us and cause patterns to form and leave these impressions that never really go away. So, we will be seeing how some of Kate was formed through this relationship with Marc — and how that may impact her current relationship.

Read more: ‘This Is Us’: Randall and Kevin Are Not Speaking and It’s More Detrimental Than Fans Think