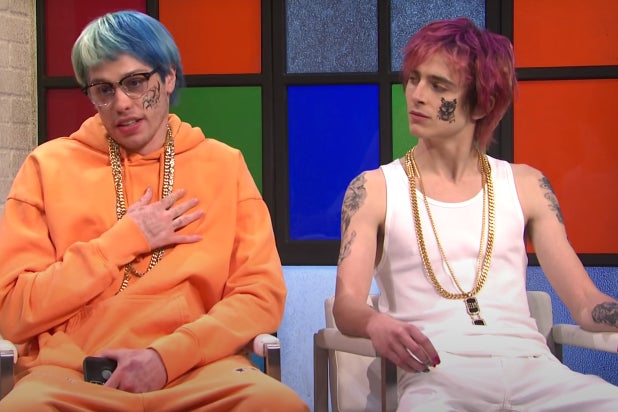 Timothee Chalamet made his “SNL” hosting debut this weekend, hitting all the right notes in the charm department while showing off his comedic and musical chops. Although most of the holiday-themed episode focused on news beats, there were a few moments of general off-the-wall fun — like a Chalamet and Pete Davidson rap that reminded fans of a video Chalamet made in high school.

Yes, before he was heartthrob Timothee Chalamet, the perfect boyfriend in “Little Women” and “Call Me by Your Name,” he was “Little Timmy Tim” who recorded a video for his high school math teacher rapping about statistics. And, look, he’s no Lin-Manuel Miranda, but Chalamet actually has pretty decent rapping skills. Who knew?

In the two-minute video  — which you can check out below — he alternates between chanting “statistics” and “Ms. Lawton” (his math teacher).  “Let’s do a problem, let us see, the probability you see me on tv,” Chalamet raps, continuing with “I’m a statical wonder, a statistical gem.” He’s eventually joined by a bunch of classmates, who dance around him while he continues his rap.

Imagine your claim to fame being in a high school rap sketch with Timothee Chalamet? Try dropping that fun fact at a party.

In the SNL sketch titled “XXL Rap Roundtable,” Ego Nwodim moderates a panel on hip-hop that includes Queen Latifah (Punkie Johnson) and Questlove. Davidson and Chalamet play a duo called “Guaplord” and “$mokecheddathaassgetta,” who are most popular for “breaking the record for most streams on Soundcloud.”

Chalamet channels his high school rap persona during the skit, though he kicks it up a notch and takes it over-the-top. There is a lot of grunting and weird and obscure references to the “ye” when asked what hip-hop means in 2020, which causes Nwodim to interject with a bit of shade:

“The two confident white boys raise an interesting point. The sound has changed,” she says.

Nwodim finally gets fed up and asks both guys to speak in full sentences. Chalamet talks about his hip-hop influences: Fall-Out Boys, the Kia Hampsters and TikTok. The sketch ends with Chalamet and Davidson getting up and doing their famous rap, which is, once again, a lot of unintelligible gibberish and crazy dance moves that, apparently, is too much for Questlove to handle.

As brilliant as Chalamet and Davidson are as a comedy duo, this sketch really is a perfect homage to Chalamet’s amazing hidden talents. Thanks to “SNL” and Chalamet for reminding us his pre-fame video existed. And thanks, Timothee, for once upon a time making math sexier. It’s the little things.