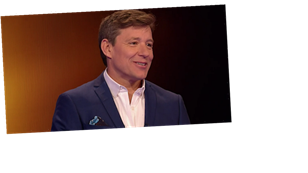 At the end of the first round, Joe found himself in third place, Olivia was slightly ahead in second place and Richard was storming ahead in first place.

Just before the show went off-air for a commercial break, host Ben Shephard said: "So Richard is leading, Olivia you're currently in sloppy seconds."

As the studio audience erupted into laughter, the blonde bombshell replied: "Very sloppy."

Good Morning Britain star Ben, 46, added: "You're going to have to try and talk to the machine around and see if you can improve things in round three. Will Olivia do it?"

Viewers at home were unimpressed at Ben's cheeky remark towards Olivia and rushed to their keyboards to discuss the awkward moment.

Taking to Twitter, one fan penned: "Umm did just hear Ben say 'sloppy seconds' on TV…how rude . It’s not even live and they didn’t think it was awful enough to edit out!!#tippingpoint."

"Did I hear it right? Did @benshephard just say, "sloppy seconds"? #tippingpoint," another added.

While a third social media user joked: "@benshephard 'Sloppy seconds'? It depends who it is, my dear. #tippingpoint."

A fourth viewer said: "Did I just hear Ben Shepherd right on #tippingpoint ? Sure he said 'sloppy second'". Dirty boy!"

TOWIE star Olivia, 29, impressed viewers after correctly answering that auricular muscles are found in the ears but struggled on a few general knowledge questions.

When asked what letter appeared on motorcycle learner plates, she incorrectly answered 'P' instead of 'L'.

Olivia also thought an accurate description for illusion was "smoke and feathers" – not smoke and mirrors.

And when she was asked a question about a book publisher, she answered Penguin instead of Mills and Boon.

The reality star ended up coming in second place, with Richard going onto play for the jackpot prize £10,000 in the final round.

However, it wasn't meant to be for the star and he ended up walking away from the show with £6,000 for charity.