Unbreakable Kimmy Schmidt is coming to an end, but not before tackling the #MeToo movement head-on in its final season.

Netflix’s offbeat comedy has dealt with themes of consent all throughout its lifespan — Kimmy began the series as the survivor of a doomsday cult — and it looks like writers Tina Fey and Robert Carlock plan to revisit the subject in episodes to come.

However, this time it’s Kimmy (Ellie Kemper) who finds herself on the wrong side of the #MeToo debate… albeit obliviously. Have a look at the extended sneak peek below:

The fourth and final season of Unbreakable Kimmy Schmidt will also see Kimmy confronting her white privilege, although she’s not exactly leading the charge on the right side of that issue either.

It was reported earlier this month that Netflix would end Unbreakable with its upcoming run, although it wasn’t ruling out a film spin-off for Ellie Kemper, Tituss Burgess and Jane Krakowski at some point in the future. 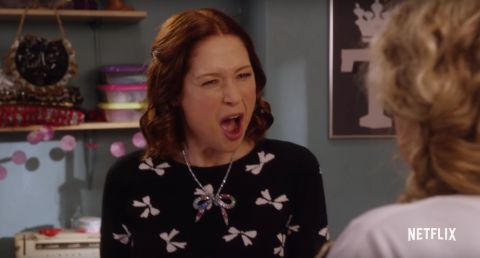 Season four will premiere its first six episodes on Netflix worldwide on May 30, with the final batch to come in the months ahead. Krakowski said earlier this year that producers hoped to debut the latter-half “as soon as possible, so [they] don’t have to make fans wait so long”.

Joining the cast of Unbreakable Kimmy Schmidt will be former Dawson’s Creek star Busy Phillips, whose character is being kept under wraps for now by Netflix.