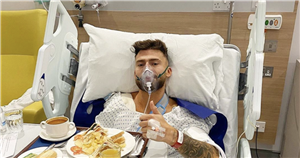 Vicky Pattison is among the four celebrities to have left Celebrity SAS: Who Dares Wins following horrific injuries and pure exhaustion.

The former Geordie Shore star, 33, who previously won I'm A Celebrity…Get Me Out Of Here, was the latest star to call time on the tough military-inspired Channel 4 show after she found the challenge too much to endure.

Vicky was teamed up with Olympic rower James Cracknell, 49, for a task in carrying a barrel up a hill but reached her limit following her time on one of the toughest SAS selection courses located on the remote island of Raasay in the Scottish Hebrides.

However the brunette beauty revealed that she hated 'letting people down' following a scene on the reality show Geordie Shore in 2012.

Vicky, who is now in a relationship with Ercan Ramadan, made the tough call to leave the show and reflected on her decision, adding: "I have this like big regret that most people will probably know. I had sex on TV. Me mam didn't speak to us for ages when she had found out what I had done.

"So since then I just don't like letting people down."

Meanwhile Saira Khan, 51, who carried on with a broken ankle for a day after snapping it in a mud fight with Ulrika Jonsson, was forced to quit the competition following her injury.

The former Loose Women panellist took to Instagram to share a snap of her swollen foot with her 97,600 Instagram followers, captioned: "I tried my very best, but in the end I had to be honest with myself. I was in pain and didn’t want to let the other’s down. I was dragging behind and I felt I was being a burden.

"I actually fractured my ankle and have had surgery where I’ve had a metal plate and 9 metal pins put in. I was in a cast for 12 weeks – but am all mended now.

"I’m proud of my ankle scar because it will always be a reminder of a time I did my very best and pushed myself outside my comfort zone.

"Thank you @sas_whodareswins for an amazing opportunity which I will remember for life. Thank you all for your amazing support."

The mum-of-two also thanked her 'amazing surgeon' and shared an X-ray of her ankle, captioned: "Thank you to my amazing surgeon Mr Bob Sharpe for putting me back together. I’ve now got a bionic ankle thanks to his amazing skill. "I’ve never broken a bone in my body and at 51 it was a shock. But to anyone who is suffering with an ankle injury please know you will heal, but rest, keep positive, exercise your upper body and believe in your power."

Meanwhile Jake Quickenden was also forced to retire from the show after rupturing his pectoral muscle and bicep during an accident in a speedboat challenge.

The former X Factor star, 33, who has four pins in his shoulder, shared a snap on a hospital bed, captioned: "Didn’t end how I wanted….

"Believe it or not I was loving every second, I found out exactly what I needed to know about myself!! I will always give 100% and I said the only way I would leave the show is in an ambulance and unfortunately that’s what happened…. I’m back to normal now after a year of pain and physio!!

"The show was the best/ hardest thing I’ve ever done it tested me to my limits, but it also told me that I am who I thought I was, I’ll never give up, I’ll help my mates, I will lift the mood and will always remain positive, even getting driven away in the ambulance I was positive about the outcome and I knew I would come back bigger and better.

"I would like to thanks the staff @antmiddleton @melvyndownes @stazthrudark @jason_carl_fox @billingham22b and also the rest of the cast who honestly worked so hard and only us guys will know how hard it truly was, nobody has anything to be ashamed of, I’d love some of the keyboard athletes to give it ago, they wouldn’t last a f*****g minute!! Peace and thanks as always for the love and support."

Elsewhere British former bicycle motocross racer and track cyclist Shanaze Reade, 32, described how she was 'gutted' after breaking her shoulder during the competition.

Shanaze described how she felt 'short-changed' that she had to retire from the show with an injury and posted a selfie with a thumb's up and a sad face to her 18,300 Instagram followers.

In an emotional post, she wrote: "Over but not out.

"Wow, that was one hell of an episode! Doing SAS was about way more than doing a TV show, it was firstly to show a sign of respect for my best friend @lairdanco_mentoring Who is a former royal marine.

"I have always respected our service men and women! I also wanted to really test myself doing something mentally and physically challenging! At the point when the show was filmed I was 2.8 years sober. I was starting to really understand who I was, what better way than to test it on @sas_whodareswins.

"I gave the show my absolute 100%!!! There were many scenes that weren’t shown, but the memories I will hold in my heart forever so thank you to the amazing @jason_carl_fox @antmiddleton @billingham22b @melvyndownes @stazthrudark and thank you for igniting a flame inside my soul I thought had once died! The show changed my life! Thank you from the bottom of my heart!

"Obviously not the way I wanted it to end but grateful to each and every person on the show with me."