Speaking to presenter Annita McVeigh about the new State of the Climate report, Mark began by saying: “Erm, yeah, so one thing this report is looking at is our climate over the last hundred years or more, and one thing that we’re seeing is, er… erm… sorry, excuse me.”

He then crouched down and disappeared off camera.

“Are you okay, Mark?” enquired Annita. 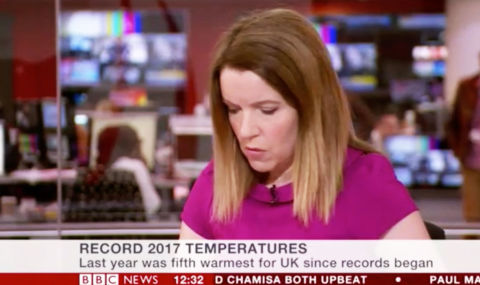 Annita hastily tried to move on and added: “Mark, perhaps we’ll try to come back to you, and I do hope that Mark McCarthy there is okay.”

Mark has since taken to Twitter to try and explain the bizarre incident. He wrote: “Note to self – avoid passing out on live tv. Ever so sorry @annita_mcveigh @BBCNews not my finest interview! #sciencecommfail”

This isn’t the first time a BBC News interview has gone awry live on TV.

Presenter Tom Donkin left viewers in hysterics during a BBC World News bulletin that saw him dashing around the studio trying to find a camera to speak to. While another entertaining moment left Huw Edwards staring silently at the camera for THREE MINUTES.

Then there was the time BBC presenter Simon McCoy accidentally picked up a ream of paper, rather than his iPad, but carried on trying to scroll it like a trooper. 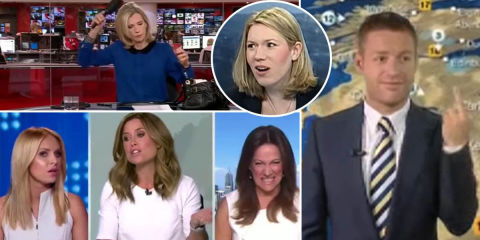 Meanwhile who can forget the infamous time Tomasz Schafernaker gave his co-presenters the middle finger live on TV, not realising he was still on camera?

And perhaps the greatest BBC News moment of all time – when Robert E Kelly’s small daughter and baby bowled in behind him while he was doing an interview live for the channel talking about some big political developments in South Korea.