‘Westworld’ Finale Review: Episode 8 Makes It Hard to See the Beauty in All This Disarray — Spoilers

After the obligatory slow cover (“Dark Side of the Moon”) played over the credits and the anticipated post-credits scenes teased the unanticipated Season 4, a simple line lingered, like the rest of “Westworld,” longer than it should. Stated by the last character shown in Season 3 — and arguably the least important — Bernard says, “What’s about to happen was always going to happen.” Played by the inimitable Jeffrey Wright, Bernard’s words always carry a bit more significance than the lines as written, but this one holds implications for the future (if you care) and, more pressing, helps explain what went wrong over the last eight weightless episodes.

Bernard, pacing in a hotel room straight out of “Psycho,” is telling his bleeding buddy Stubbs (Luke Hemsworth) that an “apocalypse” is about to befall mankind; that the end of the world is about to happen, and there’s nothing anyone can do about it. “Serac (Vincent Cassel) and his brother were just holding it off,” Bernard says, referencing the artificial intelligence system Rehoboam that came came to dictate every movement of the human race and, accordingly, created the stakes for Season 3. It’s the same system our new hero Caleb Nichols (Aaron Paul) just destroyed, with a little better-late-than-never help from Maeve (Thandie Newton), and the very thing that Dolores died to stop — or, well pretended to die for, or kind of died for, or whatever you want to call the thing that happened to Evan Rachel Wood’s host in a scene the actress described as “saying goodbye to this version of Dolores,” which implies another, Wood-fronted version(s) will return.

But… none of that matters? Rehoboam, Serac, and the real world, all of which we had yet to see before Season 3 began and were meant to believe mattered very much during it, just got wiped away in an end times event — and there was nothing anyone could’ve done to stop it. Wouldn’t this event have wiped out Rehoboam, too? So, what were they fighting for again? The ethereal concept of freedom? Robots’ rights? Human rights? The right to choose? All of that kind of pales in comparison to humanity’s continued existence, and while it seems safe to assume “Westworld” wouldn’t wipe out the entire human race before starting another season, what does it say about the show’s concept of emotional investment that, after spending two seasons fighting to reach the real world, it would dispose of it in a few seconds?

Season 3 did a remarkable job undercutting its own potential. Again and again, the HBO drama reset its motor functions to inoperable conditions, whether it was eliminating an audience’s already threadbare connection to characters’ fates by introducing cloning (cloning!), or resurrecting them without even bothering to utilize the newly introduced cloning trick, or sticking them in a virtual world that has no consequence on reality. (OK, Season 3 did a lot of things poorly, but boy, it really did Maeve dirty.) Even in its final moments, big holes were magnified: William’s (Ed Harris) arc culminated before he could prove whether he really was “the good guy” he believed he’d become; Bernard revealed the answer to a question raised at the end of Season 2 — why did Dolores keep him alive? Because he has the key to “The Sublime” (or the Valley Beyond or whatever you want to call another virtual world where all the robots live in blissful ignorance) — but that reveal only shows he didn’t get to do anything this year except wander around with Stubbs, introduce the worst cameo of all-time, and wonder why he’s still alive. 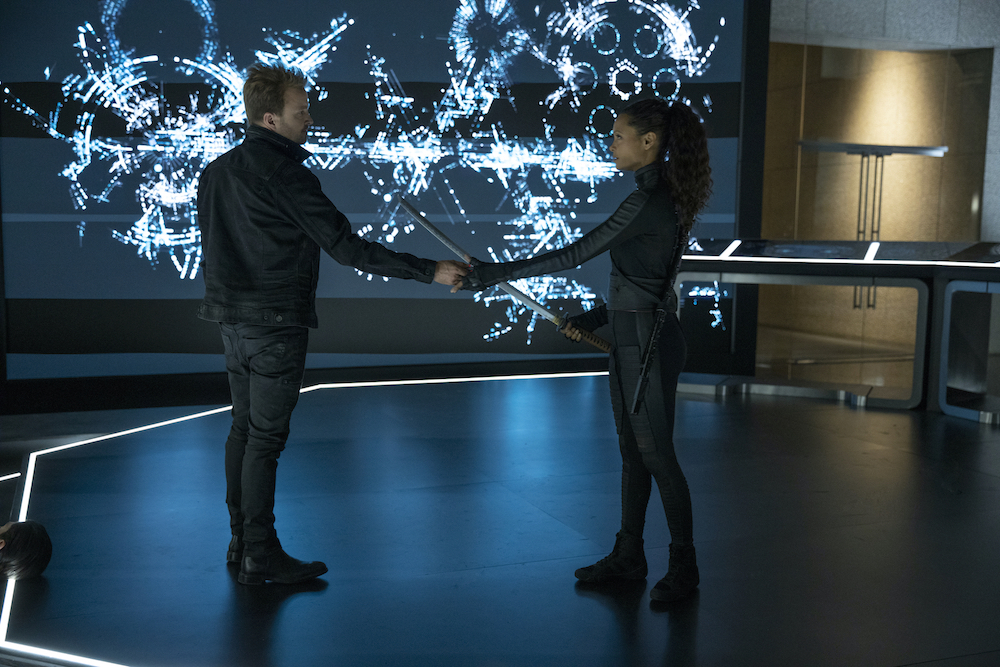 When “Westworld” opened, it aimed to examine humanity through glimpsing its best and worst impulses. What did it say about William, and people like him, that they would go to a park where they could be heroes and choose to be villains instead? At what point did their treatment of non-humans become inhuman? And when do these hosts, these monsters of Dr. Frankenstein, become not monsters, but living, breathing, entities worthy of human kindness? Season 3 made a point of stripping away the rest of “Westworld’s” building blocks: The park? Left behind. The maze? Gone. But the moral questions meant to keep you invested in the characters largely disappear, too. Season 3 doesn’t bother developing its characters because it refuses to let them question the nature of their own reality.

Bernard is reduced to filler; William is as confused as he is confusing; Maeve’s only concern is her daughter, even though a made-up child living in a virtual world doesn’t seem like it should mean much to a self-aware host. Dolores has a master plan that she executes to near-perfection, but there’s zero exploration of what it means that she would create clones of herself just to kill them — isn’t she committing the same sin as her creator? Charlotte Hale, aka Dolores 2.0, is reduced to a villain in the post-credits scene, setting out to make a host army and killing William in the process. She had a great arc this year, and Tessa Thompson is always a draw, but can she deserves more than becoming another one-dimensional big bad.

“Westworld” wants to have its cake and have its cake and eat it too, and eat it too — once isn’t good enough when the show’s rules allow for endless consumption, but no fictional allowances can trick you into appreciating the cake every time. As Dolores lies there in pain, staring helplessly at Maeve and Caleb, you’re meant to worry for her. She’s dying! She’s the lead of the show, and she’s dying! And yet, there she is, standing in a beautiful Valley, chatting with Maeve. Is she dying? Yes. Does it feel like she’s dying? No. There’s always another version, stashed away in the warehouse of Jonathan Nolan and Lisa Joy’s designs. There’s always a way for her to come back, so why worry if this version dies?

So, like a scorecard at the end of the ballgame, I’ll leave you with a list of who’s dead and who’s alive at the end of Season 3. No doubt you’ll need to check it a year or two, whenever “Westworld” returns, but it doesn’t really matter anyway. Anyone can come back, or the world could end in the blink of an eye. You’re not going to feel a thing either way.

“Westworld” Season 3 is available to stream on HBO Now and will be available on HBO Max when the service launches May 27.