It's based on real-life doctor-slash-cancer patient Eric Manheimer's memoir Twelve Patients: Life and Death at Bellevue Hospital, but at this very early stage viewers might have the feeling they're watching every medico drama since 1951's City Hospital thrown into a blender and put on "pulse". 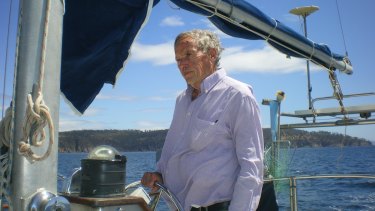 Bob Chappell disappeared from the yacht.

Ryan Eggold as Dr Max Goodwin, reformist medical director of one of the United States' oldest public hospitals, does his best to be the charming maverick the role demands but there comes a point in episode two – possibly between the bit where he sings Your Love Keeps Lifting Me Higher and Higher to his unborn child and the scene where he offers his support in fluent Spanish to the janitorial team – where it's just all too much. Add a howler of a medical crisis denouement set to Bon Iver's melancholy-to-the-max song Blindsided and New Amsterdam is little more than a cynical reheating of old news.

On Australia Day 2009, Hobart radiologist Bob Chappell was discovered missing from his yacht. In 2010, his partner, Susan Neill-Fraser, was convicted of his murder and sentenced to 23 years' jail. Next month, the case that has gripped Tasmania returns to court as Neill-Fraser seeks leave to appeal her conviction.

This six-part investigation from filmmaker Eve Ash, featuring former homicide detective Colin McLaren on the trail of new evidence, claims to be impartial but works hard to exonerate its subject. True crime aficionados will love it.