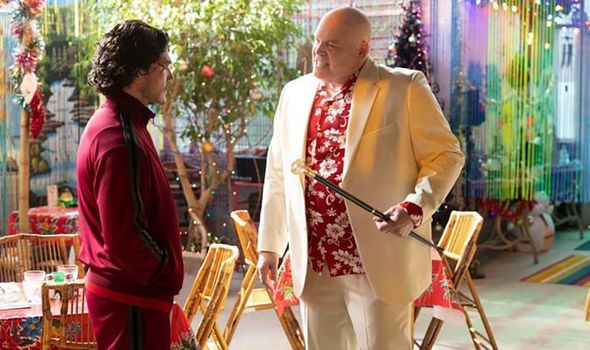 Last time we saw him he was face to face with Echo as she pointed a gun at his head. The camera turned a corner and bang… a bullet was fired off-screen. We didn’t see Kingpin go down, we didn’t see a body, and we certainly didn’t see a funeral with hundreds of mobster mourners. So what does that mean?

If we take a look at the comic books Hawkeye’s end storyline was adapted from, we learn that when Echo shot Kingpin she didn’t actually kill him, instead she blinded him.

This led to the Kingpin losing control of his criminal empire for a while, but he did eventually regain his power as well as his sight.

It seems unlikely that Marvel will bring a fan favourite villain across to the MCU, only to have him killed off after one episode. Instead producers will more than likely go ahead with a story like the one in the comics and have him blinded or maybe paralysed in some way.

If we are to assume for now that Kingpin is alive, then where could we see Vincent D’Onofrio play the crime boss next?

Marvel has announced a Hawkeye spin-off show called Echo starring Alaqua Cox as the titular deaf villain turned anti-hero, and that feels like a safe bet for an appearance from the Kingpin. The two of them obviously have a lot of history, and if Kingpin has survived being shot then he will surely be out for revenge.

Another character the Kingpin already has a long history with is Daredevil.

With Charlie Cox’s Netflix Daredevil appearing in Spider-Man No Way Home and Kingpin appearing in Hawkeye, one could presume that they brought their baggage with them.

We don’t yet know where we’ll see Daredevil next, but it is a safe wager that wherever he turns up the Kingpin will not be far behind.

Speaking of Spider-Man, three more films are already on the cards for Tom Holland’s Peter Parker, and that leaves plenty of scope for him to face off against some new villains. Spidey’s history with Kingpin in the comics isn’t quite as storied as Daredevil’s, but they have still had their fair share of battles.

Spider-Man hasn’t yet come up against an opponent like Kingpin, so seeing the two go head to head could make for a really interesting match up.

We also have the upcoming She-Hulk TV show coming to Disney+. The cousin of Bruce Banner is not just a mindless Hulk, she also happens to be a great lawyer.

Having her try to take down Kingpin’s criminal empire could be a great way of bringing her into the MCU, and she could even team up with fellow superhero lawyer, Daredevil, to do it.

In truth, Vincent D’Onofrio’s Wilson Fisk could turn up just about anywhere. Whether it be on one of the other Disney+ shows like Moon Knight, or in the next big-screen blockbuster like Doctor Strange in the Multiverse of Madness.

One thing is for certain among fans – we surely haven’t heard the last of the Kingpin of crime.