Who is Donny Cairn in Emmerdale, when was he last in it and why has he returned?

It turned out the mystery assailant was none other than serial killer Lachlan White’s biological father, Donny Cairn who was last seen in the village back in 2015. 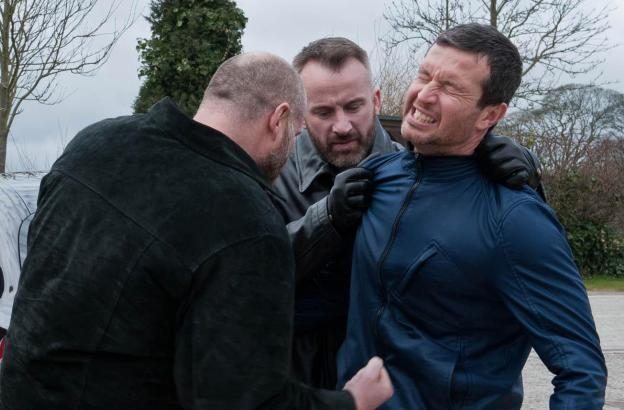 Who is Donny Cairn in Emmerdale?

He’s the ex-partner of Lachlan’s mum Chrissie White, but the murderer didn’t have much to do with his biological dad while he was growing up.

The apple clearly didn’t fall far from the tree though considering Donny’s attitude after stabbing Vanessa.

Back in 2015, Chrissie got in touch with Donny after Lachlan sexually assaulted Alicia Metcalfe.

Donny – who was a successful businessman – was stunned to learn what his son had done and promised to be there to support him.

It soon turned out that Donny wasn’t a successful businessman after all and was in thousands of pounds of debt.

Robert Sugden – who was married to Chrissie at the time – uncovered Donny as a penniless liar who was living in a bedsit.

He was last seen evading Debbie Dingle and Ross Barton after trying to swindle £10,000 out of Chrissie.

As well as Emmerdale, Alan’s appeared in many TV shows including BBC One shows Doctors and Casualty.

He was also a presenter on short-lived Channel 4 breakfast show RI:SE in 2002.

Why is Donny Cairn back in Emmerdale?

Donny is back to help his son Lachlan get revenge on the Dingle family, who he believes are the reason he’s in prison.

Donny was in contact with his jailed son via a secret mobile phone Lachlan had in jail.

It’s thought he is behind the break-in at the Dingle farm and the murder of Gloria the pig.

Donny stabbed Vanessa Woodfield and drove off with her son Johnny after she confronted him as he doused petrol over the Woolpack.

He was apprehended by Vanessa’s girlfriend Charity Dingle who managed to knock him out after tracking him and Johnny down.