Who Is Lady Whistledown on 'Bridgerton'? We Know The Answer. If you’ve ever wondered what Gossip Girl would be like in 1800s high-society London (I mean, who hasn’t, right?) then Bridgerton‘s got you covered. Instead of an anonymous gossip blog, it’s the anonymous Lady Whistledown’s Society Papers, but trust me, the drama and mystery is still the same.

Obviously the one thing we all wanna figure out is who the heck is Lady Whistledown? We all know, of course, that the voiceover of Lady Whistledown is done by Julie Andrews (a sharp ear or the IMDB page could tell you that much). But which of the characters is actually the gossiping tabloid writer? Well, the show takes you on a wild ride before revealing her identity in the very last episode. [FYI, at the end of this article we are going to reveal who Lady Whistledown is, because it is revealed in the final episode of the show. We’ll mark it with a spoiler warning, but this story is generally pretty spoiler-y! Proceed with caution.]

The first person that seemed to fit the bill is Eloise Bridgerton. Even her own brother thinks it could be her! And it makes total sense considering since she’s super smart and an excellent writer. But that theory quickly goes out the window when Eloise not only denies it, but makes it her personal mission to figure out who’s behind the society paper.

After getting her Sherlock Holmes on, her initial thought is that it could be one of the servants, which makes sense since they see ev-er-y-thing. But as her housekeeper explains when she catches Eloise going through her things looking for evidence, there’s a fat chance in hell that any servant would have the time in their day to write and print a gossip paper.

Suspect number three: all the wealthy single women of the ton

So her next thought, which TBH was a pretty good one, is that HAS to be a wealthy single woman, most likely a widow. Someone who’s invited to all of the big society parties but has plenty of free time outside of that to write her paper in secret. Eloise snoops around at all the parties, and is even enlisted by the freaking Queen to figure out who did it, but sadly, the widow theory didn’t bring any viable candidates. 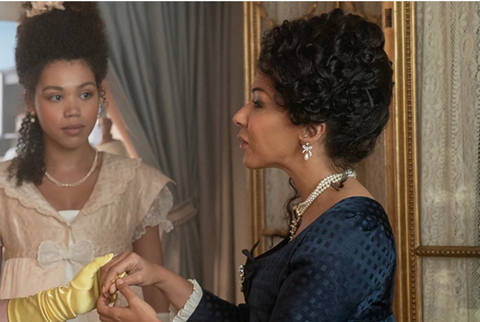 Her next suspect is Madame Delacroix, London’s famed French dressmaker. She definitely would overhear all the hot gossip while fitting dresses for society’s most important ladies, and her secret relationship with one of the Bridgerton boys would give her even more access. AND Delacroix is already kinda sus after Marina exposed her for not actually being French, so what else is she lying about!? It seems like it could definitely be her until Eloise finds out she has a rock-solid alibi. It’s not until the end of the very last episode that the show gives us what we want and confirms that Lady Whistledown is actually… [We are going to reveal who Lady Whistledown is now, so if you really don’t want to know, leave this post!!] 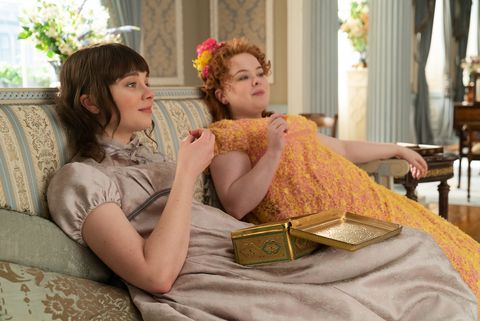 Penelope Featherington! Yup, that’s right! Eloise’s BFF was actually the writer behind the tabloid the entire time. It might be shocking at first considering the paper tore into the Featherington’s a fair amount, but if Gossip Girl taught us anything, it’s that if you’re going to run an anonymous gossip publication, you’ve got to expose yourself and your family just as much as anyone else if you want to keep any suspicion off of you.

If you were paying close attention, you may have picked up on a few subtle and one not-so-subtle hints along the way. First of all, Penelope perfectly fits the bill for someone who was at all of the parties, got all the info, and had tons of time on her hands. She’s the youngest of her sisters, so she wasn’t too preoccupied with trying to find a husband like they would have been. Plus her mom was busy covering up Marina’s, ahem, situation, and her dad was overwhelmed with his gambling debts, so they weren’t exactly too involved in Penelope’s extracurriculars. She also kept asking Eloise if she had any leads on who Lady Whistledown is, which could have just been genuine interest, but now we know she was probably just trying to figure out if her friend was onto her. She’s a sneaky one!

Penelope kind of gave herself away, though, in the sixth episode when she wrote about the fact that Marina was secretly pregnant and was trying to trick Colin Bridgerton into marrying her to cover it up. Penelope was one of only a few people who knew about that AND she was also very much against Marina trying to seduce Colin because a) she thought it was wrong and b) she clearly loves Colin herself and wanted to stop the engagement. It doesn’t take a rocket scientist to put two and two together and realize it’s gotta be Penelope. Even Eloise points out that it was odd for Lady Whistledown to go from writing about things that would have been seen or overheard at parties to something that had to have been explicitly told to her by someone who knew first-hand.

In the Bridgerton books, Lady Whistledown’s identity isn’t revealed until the fourth book, Romancing Mister Bridgerton, so we’ll just have to wait and see how they’re going to work this storyline into season 2.