Why Did These Popular Jedi All Fall For Politicians in 'Star Wars' During The Clone Wars? This is because the Jedi Order forbade attachment, which is what love causes. But a few of the most well-known Jedi became romantically attached, interestingly, to politicians; why? 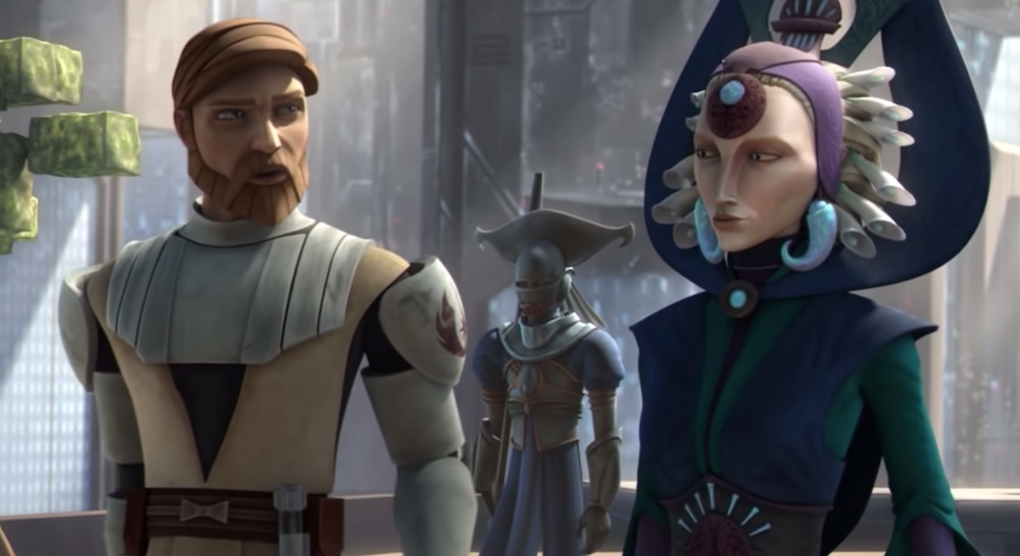 ‘The Clone Wars’ shows the romantic history of Obi-Wan

Anakin is, of course, is the most well-known Jedi to fall in love. His love story with Padmé Amidala is the main point of the prequels and one of the reasons he’s so easily manipulated by Palpatine to turn to the Dark Side. However, he’s not the only one.

Obi-Wan Kenobi grew fond of Duchess Satine Kryze of Mandalore, seen in The Clone Wars. Their “relationship” was strictly business by the time viewers meet her in Season 2; the Council sent him and Anakin to protect her during the Clone Wars. However, they had known each other since Obi-Wan was still a Padawan.

They spent about a year together on the run, with his master Qui-Gon Jinn. This was during the time when bounty hunters tried to kill her for her pacifist stance during the civil war on Mandalore. It’s never stated whether they were ever deeply attached or acted on their feelings, but their connection in The Clone Wars surely hints that they did.

This relationship would also explain why Obi-Wan turned such a blind eye towards Anakin and Padmé; it’s what his master probably did for him and Satine.

Ahsoka found she held feelings for a politician, too

In Season 3, Ahsoka Tano also developed feelings for Lux Bonteri, the son of a Separatist senator. They meet up again after his mother was murdered, and they share a kiss, although it was sort of against Ahsoka’s will.

Fast-forward to Season 5, and Lux was working with a rebel group on Onderon to release the planet from Separatist rule. Ahsoka, Anakin, and Obi-Wan come to train the rebels to fight. Ahsoka stays on longer than her masters, and it’s obvious she still has feelings for Lux, despite his attachment to the leader, Steela Gerrera.

Ahsoka’s feelings were never as strong as Obi-Wan’s for Satine or Anakin’s for Padmé, but they were there. It was enough for Anakin to remind Ahsoka to be mindful of her thoughts, but he took on the tradition of looking the other way.

The Jedi worked closely with the government during the war

Each of these Jedi worked very closely with the politicians they fell for. Even though it was against the Jedi code, their close quarters in the field brought them together. During the Clone Wars and the conflict on Mandalore, Jedi were sent in to either be peacekeepers, protect innocents, or lead the charge for the Republic. It only makes sense that Obi-Wan, Anakin, and Ahsoka all found themselves attracted to those they were assigned to protect or work with.

Of course, they didn’t fall for everyone they worked with. But Satine’s determination for peace and strong backbone aligned with Obi-Wan’s strong allegiances. Padmé had a fierce loyalty to her planet and an ability to move people with just words. This meshed well with Anakin’s passion and strong leadership skills. And Lux had a determination against a system of government that was harmful to his people. This agreed with Ahsoka’s eventual allegiance to the rebel cause.

Specifically, these politicians all cared deeply for their people and were very anti-totalitarianism. Not only is this in line with “peace-keeping” Jedi values, but these individuals were also true halves for our favorite Jedi.