But Joe Sugg — who made his name by getting slapped in the face with dead fish — is about to become a favourite among the middle-aged, as he squeezes into sequins on this year’s Strictly Come Dancing. 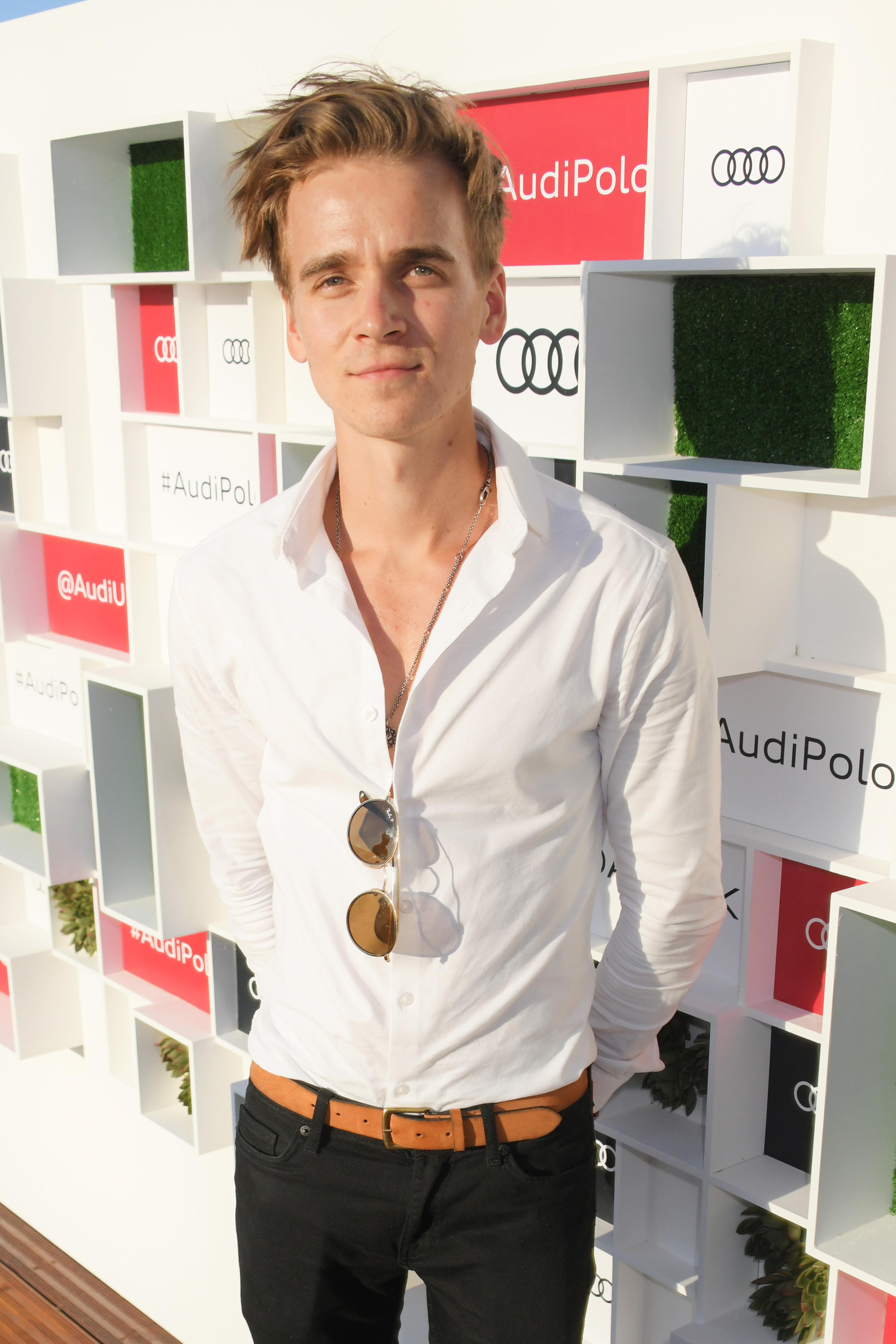 The 26-year-old vlogger is an idol to millions of millennials, courtesy of his YouTube videos amassing billions of views, and a magnet for brands desperate to be associated with him and his vast social media following.

So how has he managed to remain an unknown to most of those who will be watching him on the dancefloor this autumn?

Joe and big sister Zoe, 28 — aka beauty vlogger Zoella, one of the biggest online influencers of her generation — were brought up in Wiltshire. Their dad is a property developer, and their mum a beautician. 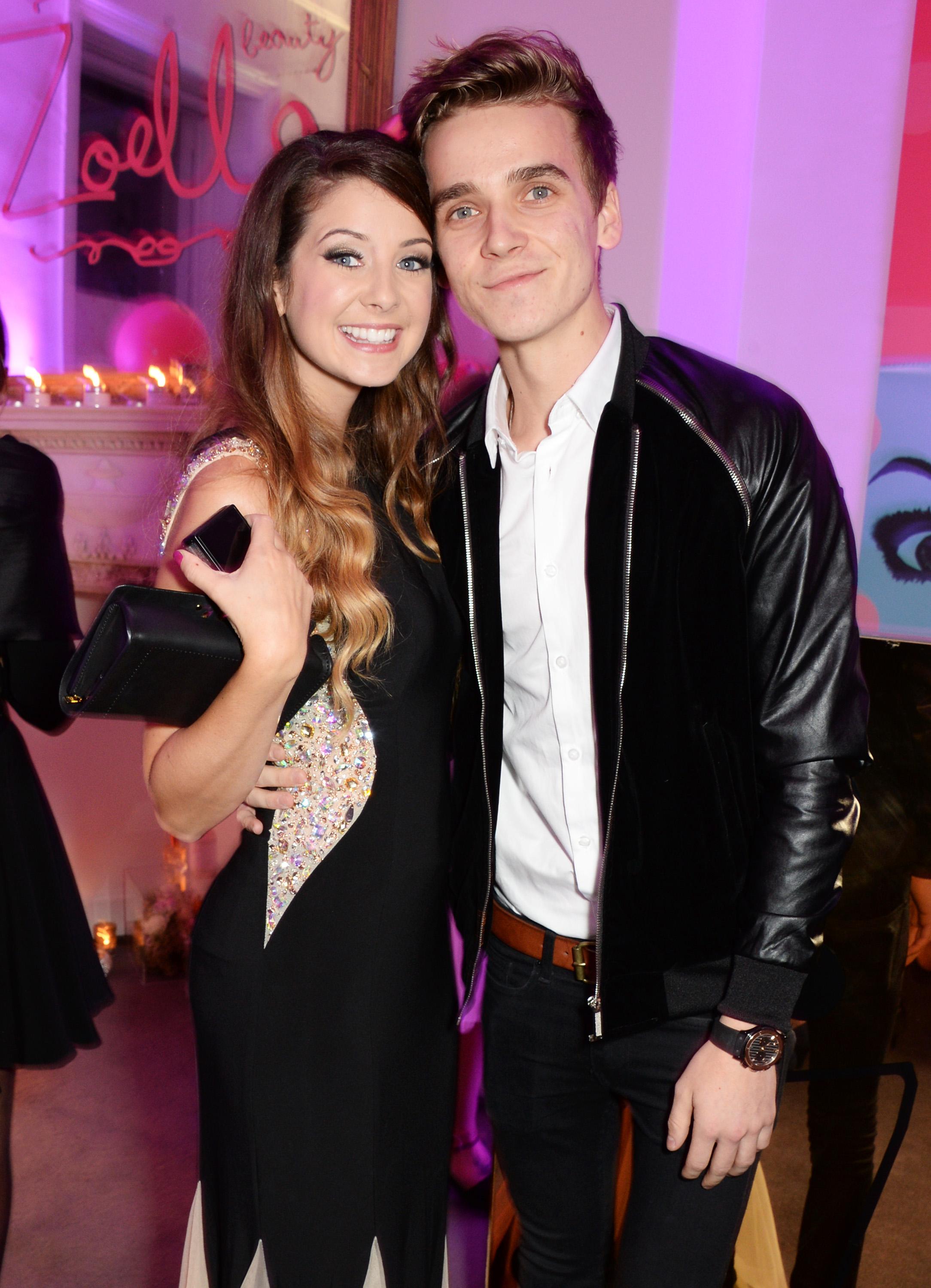 While Zoe was sharing her make-up tips with her online fans, Joe was thatching roofs in between his A-level studies and eyeing a future role in the family business.

His uncle even bought him his own van when he went full-time following his exams.

But he was also making Jackass-style stunt videos with pals and posting them to his YouTube channel ThatcherJoe.

The clips, some of which we have featured on the right, see him pranking housemates, accepting dares from fans and doing funny impressions. 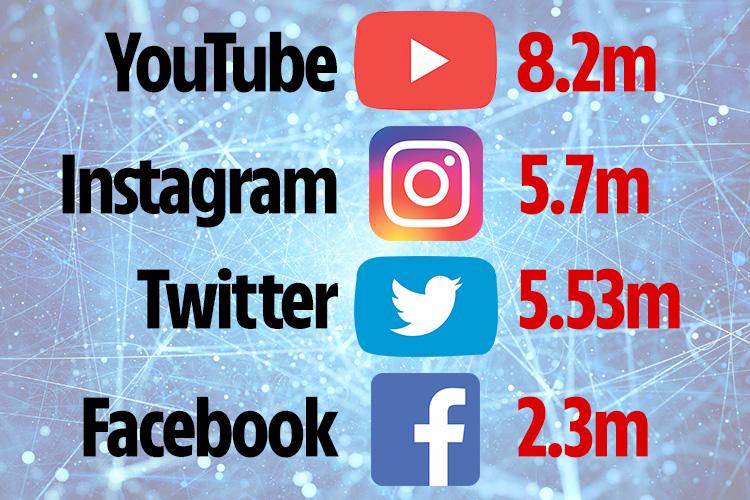 After getting his millionth subscriber in 2013, and with encouragement from his sister, Joe became a full-time vlogger.

He said: “The first two weeks of doing it, knowing that this was now my job, were scary.

“I was still doing one video a week, and I remember saying to my management, ‘Am I going to have enough to do for a whole week?’.

“I wish I could still say that. Now it’s the complete opposite.” 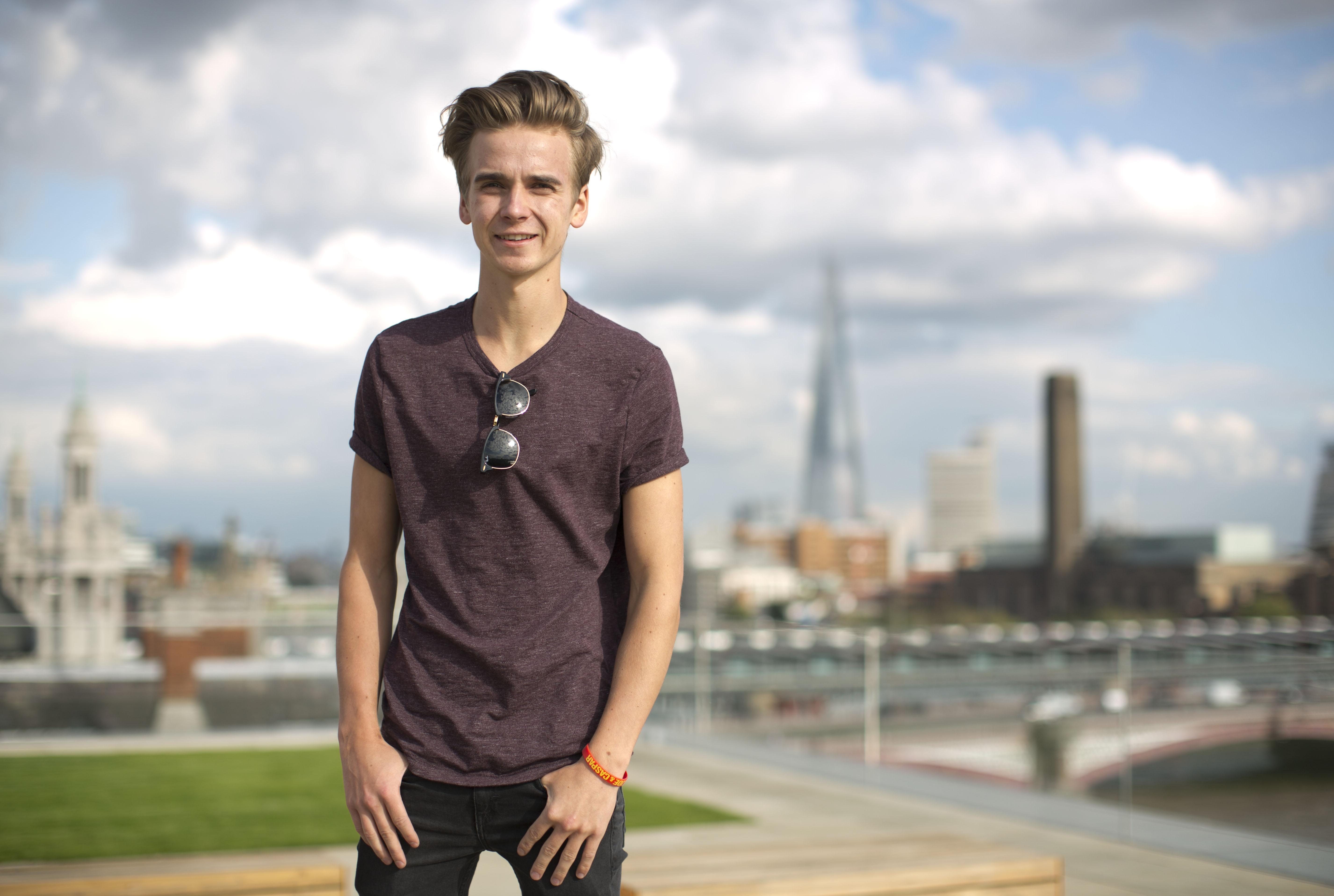 Over the past few years Joe has worked with fashion labels Boohoo and Ted Baker, as well as high street food chains Nando’s and Wagamama.

So keen is the latter to keep him associated with its brand that he is one of only three celebrities to own the Silver Chopsticks key ring, allowing him free Wagamamas for life.

Superstar singer Ed Sheeran is one of the other holders, the third is an in-house secret.

It is not just food and fashion brands eager to get in on the action. Publisher Hodder & Stoughton signed Joe up to write two graphic novels, 2015’s Username: Evie and its 2016 sequel Username: Regenerated, which became the biggest-selling of their genre. A third, Username: Uprising, was released last year. 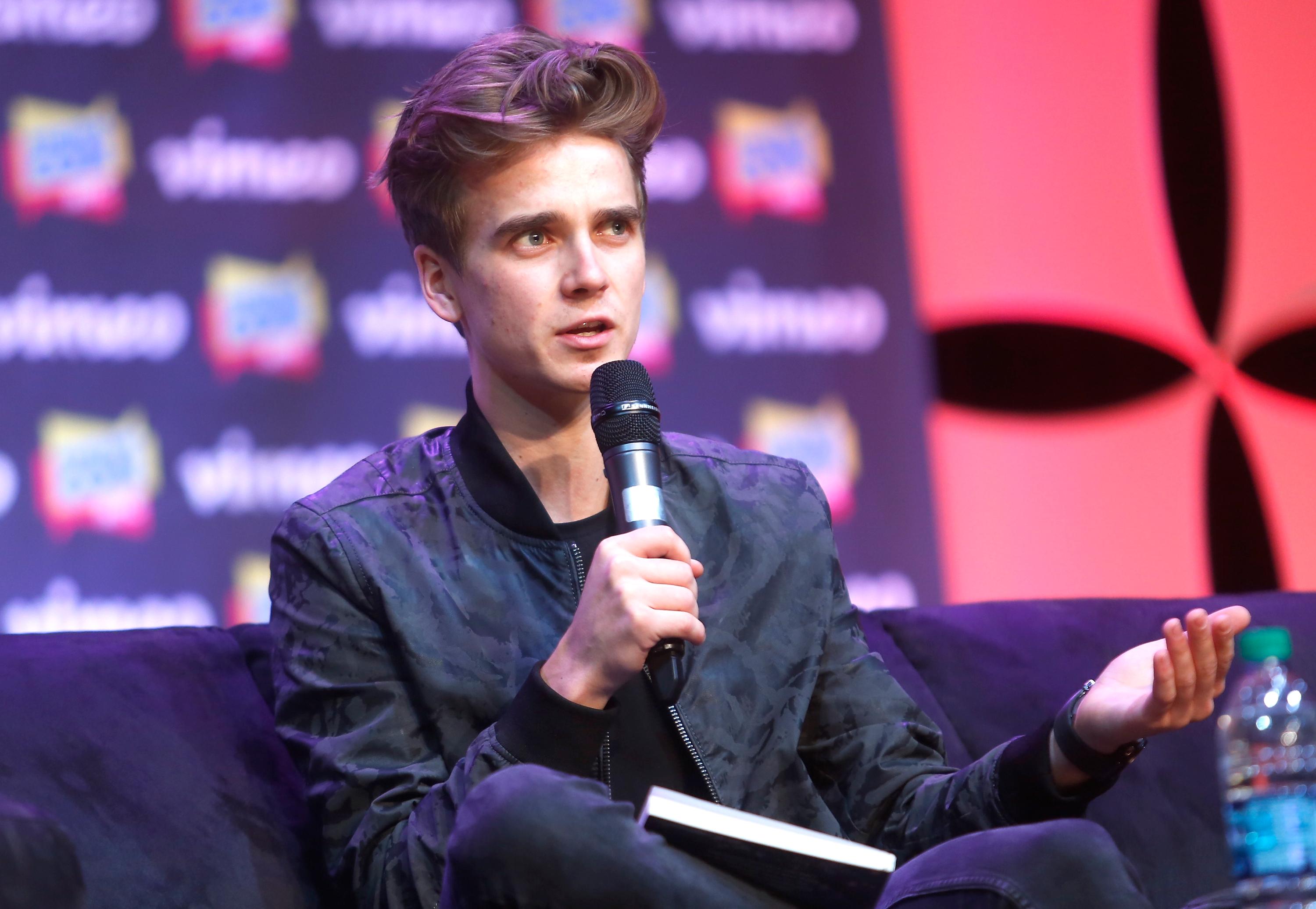 He and fellow vlogger Caspar Lee, 24, share a flat in London and have helped boost each other’s bank balances.

Videos of the pals pranking each other, including filling bedrooms with balloons and bathrooms with mousetraps, have amassed up to 17million views. 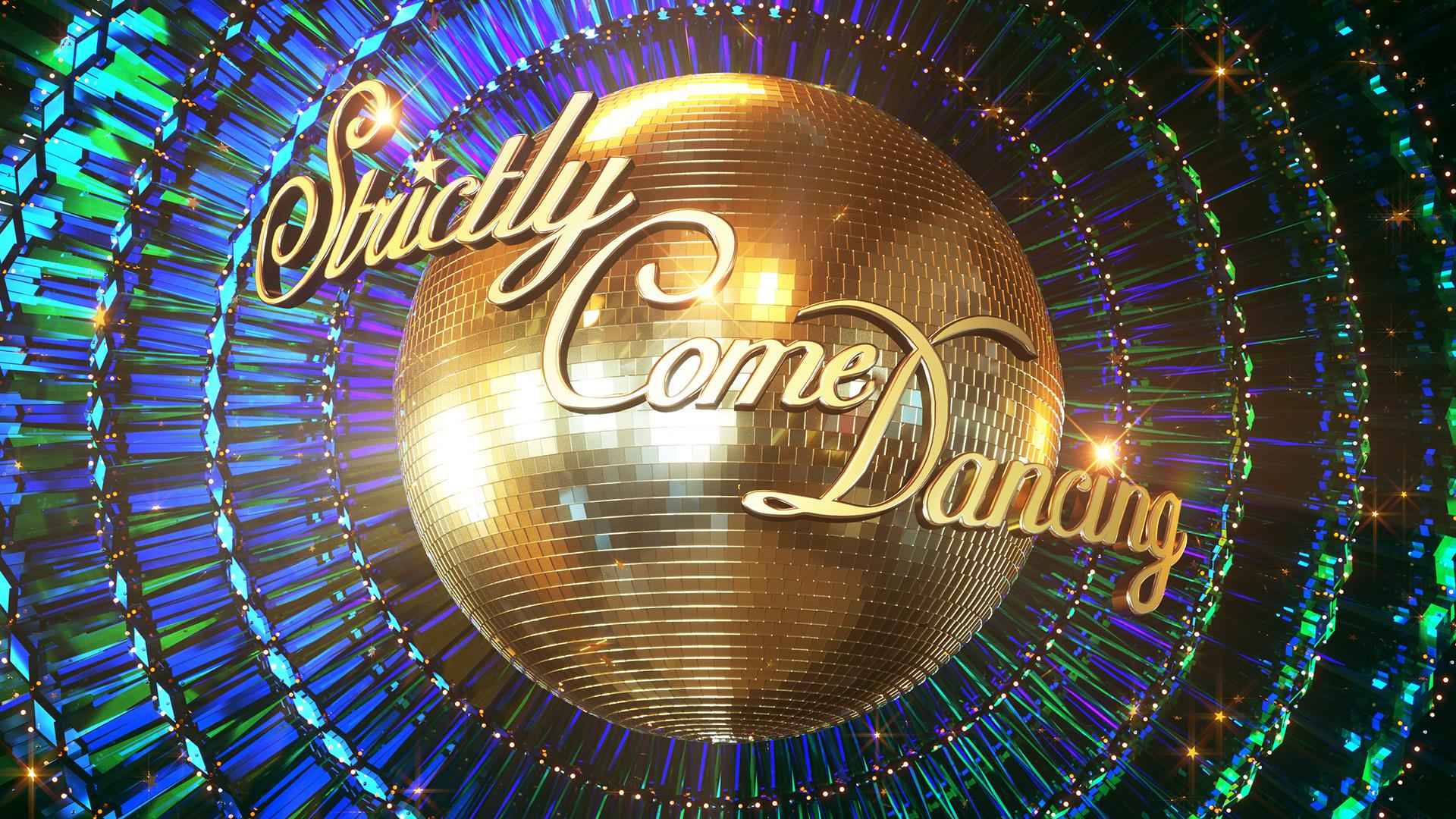 Zoe has also helped her little brother’s cause, their joint videos racking up a total 20million views. Joe, as 17th most popular YouTuber on the planet, has since overtaken her in terms of appeal.

Both are believed to be worth around £3million.

Joe admits it helps having a loyal fanbase, as it means he can try different things.

He said: “As a YouTuber, you’ve got this large, hardcore audience that sort of love you as a person, not just your content. 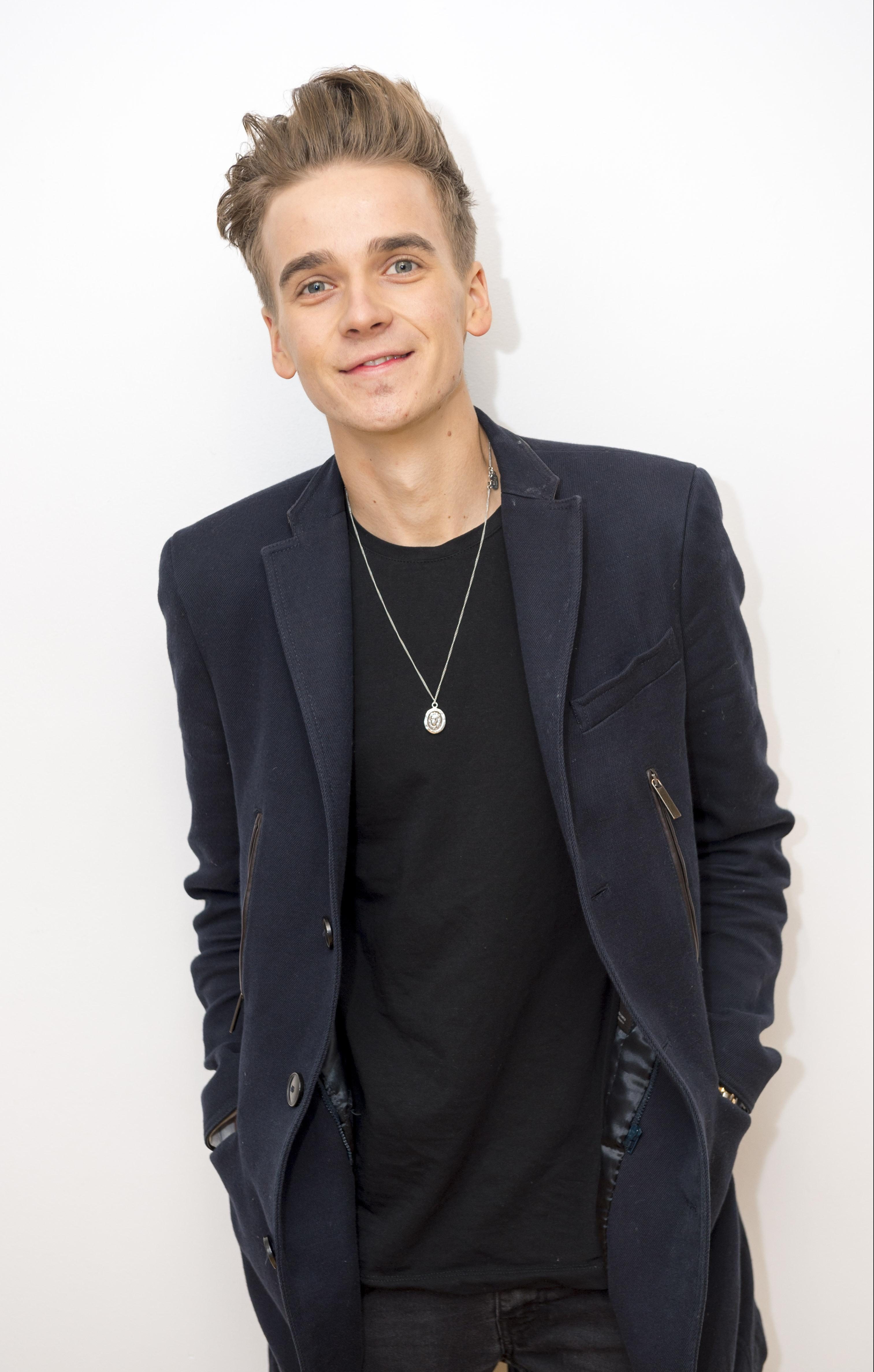 “Across Snapchat, Instagram, and everything you go into, they will follow you. So it’s almost tempting to be like, ‘OK, I don’t mind giving acting a go’, or ‘I might give singing a go’.

“It’s almost like you can try anything, because you’ve got that audience that will support you and follow you through it.”

Success has not gone to his head. His job may suggest otherwise but Joe is a shy lad who lives a relatively normal life away from the computer screen.

A pal revealed he rarely goes clubbing, stays close to his small group of friends and once he is home from work plays video game Fortnite. 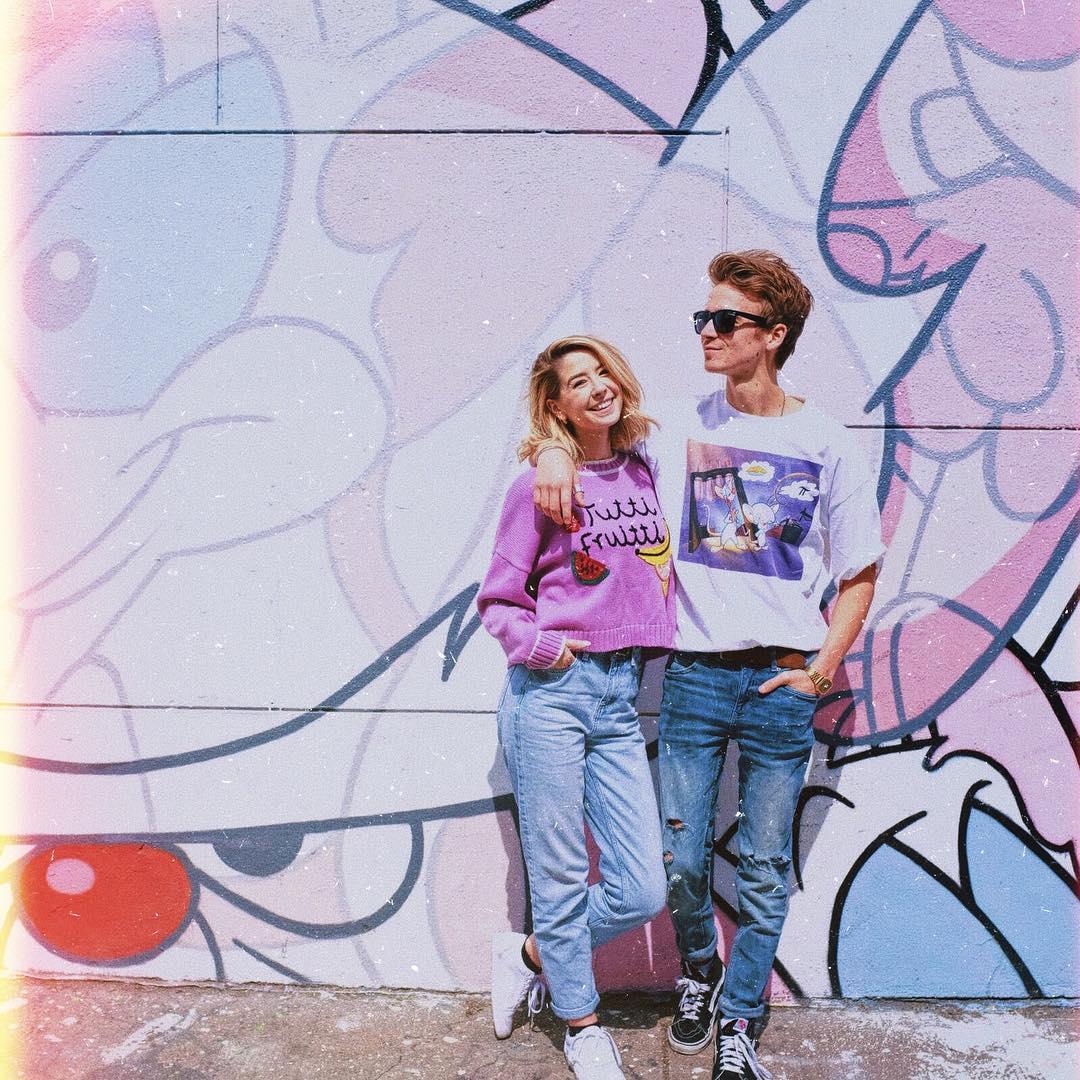 SMART MOVE BY THE BEEB

THERE was a collective “Who?” when the BBC announced Joe Sugg as the fourth contestant for this year’s series of Strictly – with me joining in.

Yet clearly there are a hell of a lot of people who do know who he is.

Sister Zoella would arguably have been a slightly more mainstream booking but, for what I expect is a slightly reduced cost, they have someone with a huge following.

The BBC might have just pulled off a masterstroke in hiring someone so tapped into the youth audience, while hoping a few of them turn on the telly on a Saturday night.

Realistically, most will watch the first episode out of curiosity then retreat to their iPads and laptops to view the rest on catch-up.

Strictly is already the most-watched show on TV, and if it can pull in even a couple of hundred thousand extra viewers in the 16-25-year-old age group, then it will be the savviest signing in years.

And when you open the show’s history books – I’m looking at you Tom Chambers, Ore Oduba and Joe McFadden – you don’t necessarily need to be a household name to win it.

He is single but hinted that he is open to that changing when he starts Strictly.

But given his wealth and popularity with the nation’s youth, some may wonder why Joe needs to take part on the BBC1 show — especially as it pays relatively little compared with rival shows Celebrity Big Brother and I’m A Celeb.

The plan is to up his profile with older audiences, especially as he is set to release his own music while on the show.

His friend added that Joe also sees Strictly as a new challenge, plus it is his grandparents’ favourite. He hopes to still be in for the round at Blackpool Tower Ballroom, where they danced in their teens. 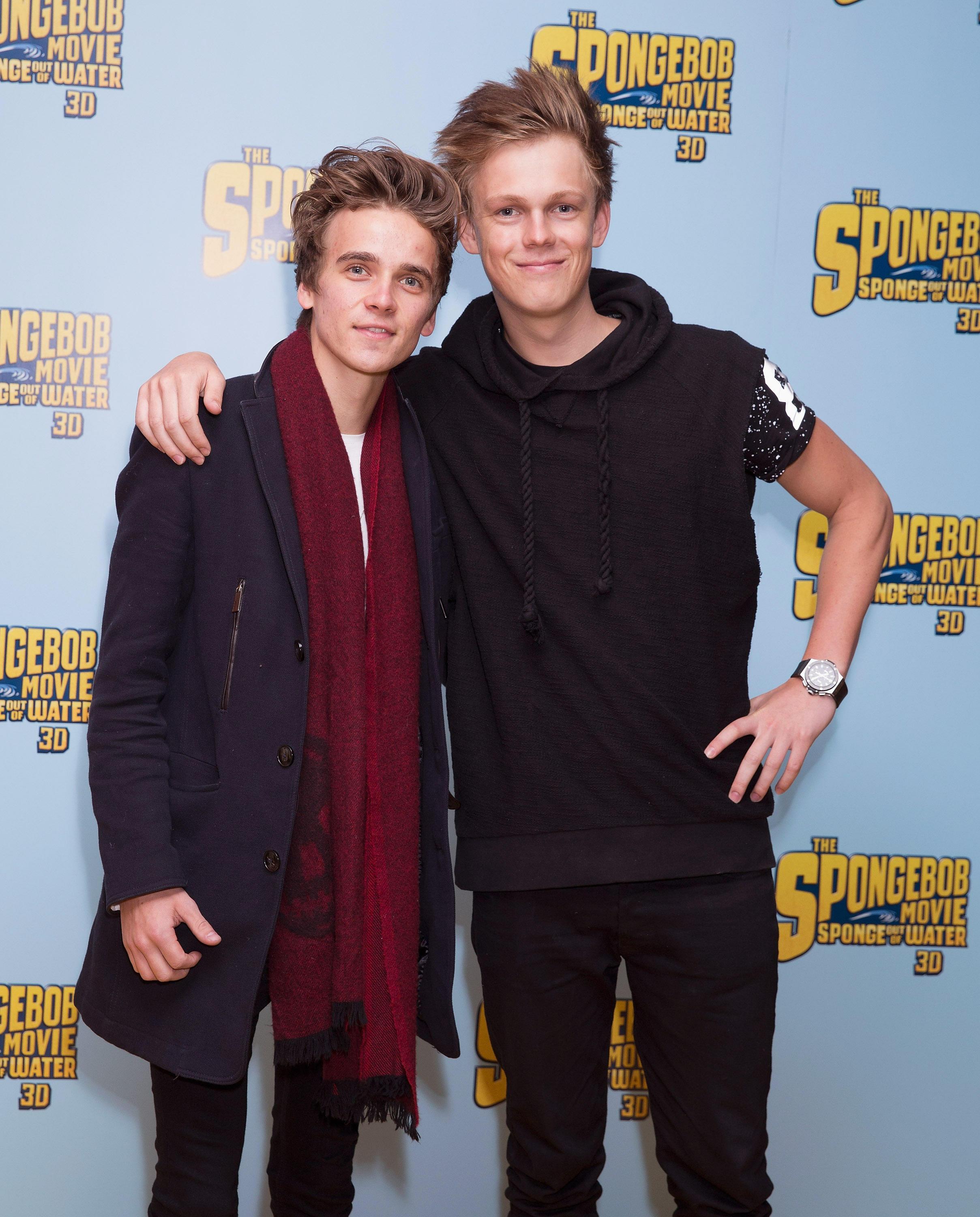 BBC bosses will also hope Joe reaches the latter stages, as his participation will mean more viewers, most probably on iPlayer.

She said: “We had an entirely new audience tuning in. They were all meant to be at school.”

Joe is not all about pranks and celebrity impressions. His videos have documented his feelings about mental health and his battle with acne, which has helped his young followers face up to similar issues. 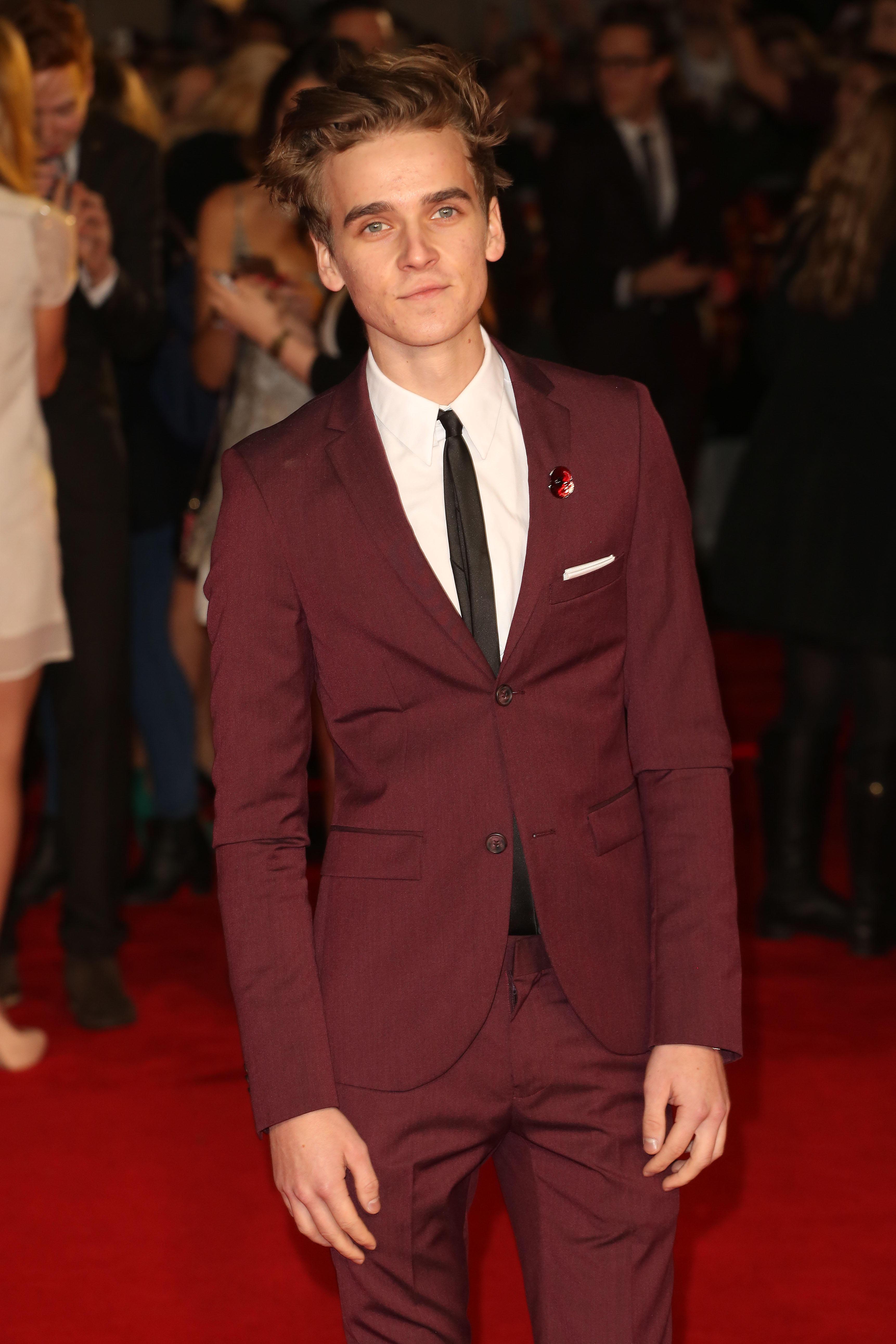 A bulk of those followers flood to YouTube because they struggle to find acceptance in large groups and seek solace in the online community.

Now they will be putting down their phones to see how their idol fares on the dancefloor against a group of celebrities THEY have never heard of.

Oli then dresses up as a scary clown and hides under the balloons, terrifying Caspar as he tries to pop them. 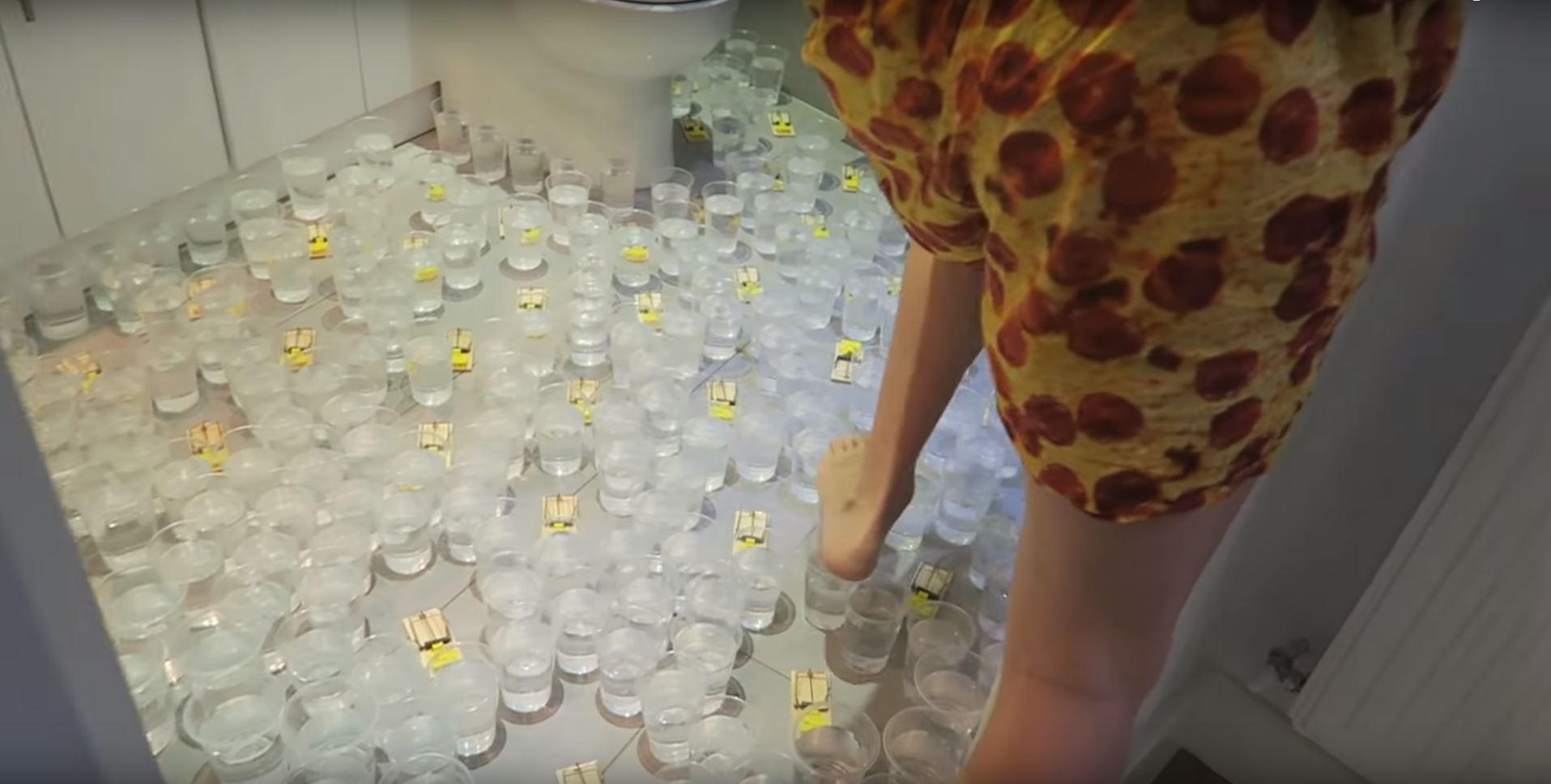 JOE hides Caspar’s keys in the bathroom and covers the floor and toilet with mousetraps and glasses of water.

Caspar has to somehow retrieve them quickly before he misses an important meeting. 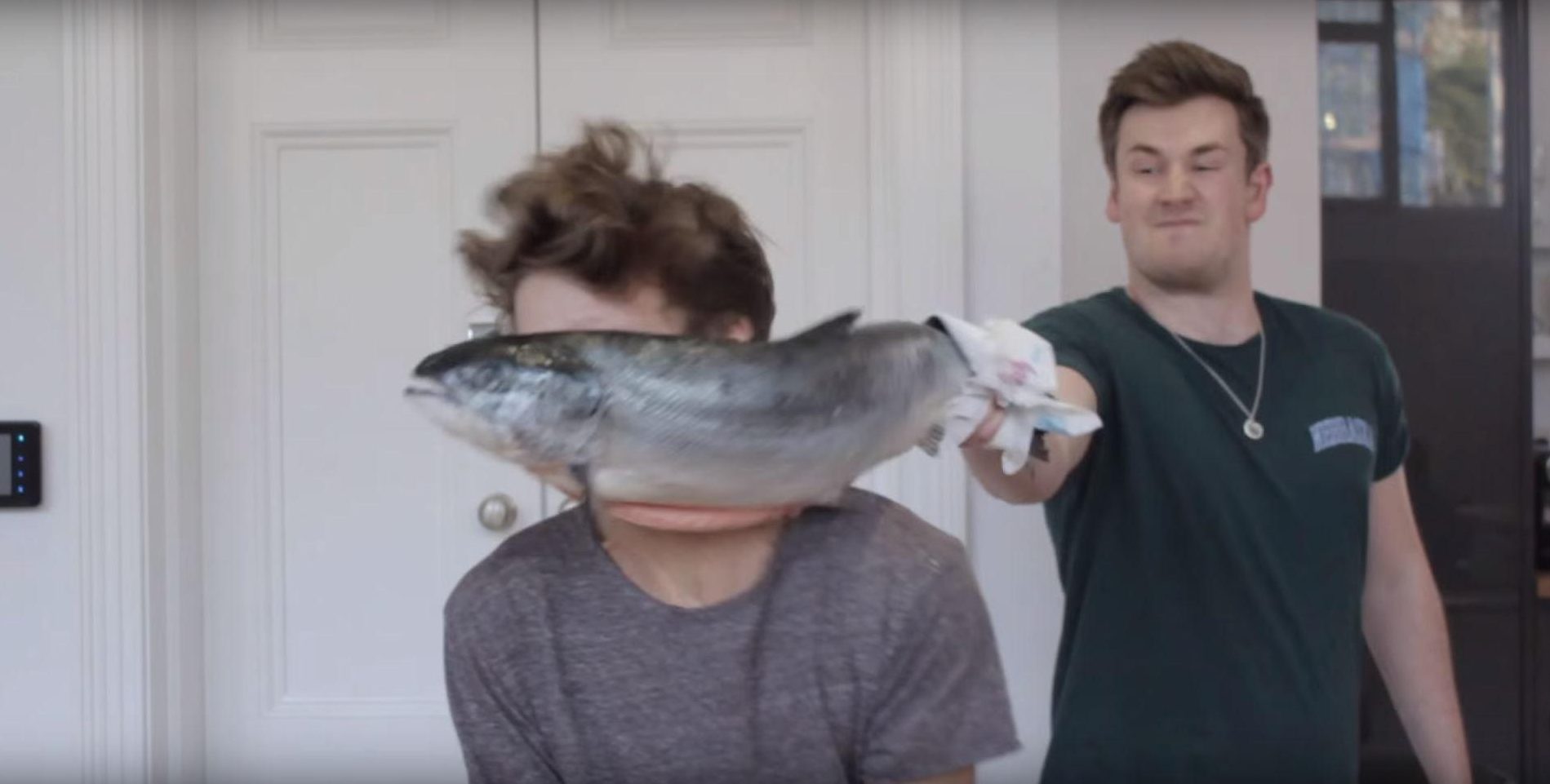 JOE often takes dares from followers – including this one from a fan who challenged him to be slapped with a fish.

Footage of Oli smacking him in the jaw with a salmon has had over 11million views. 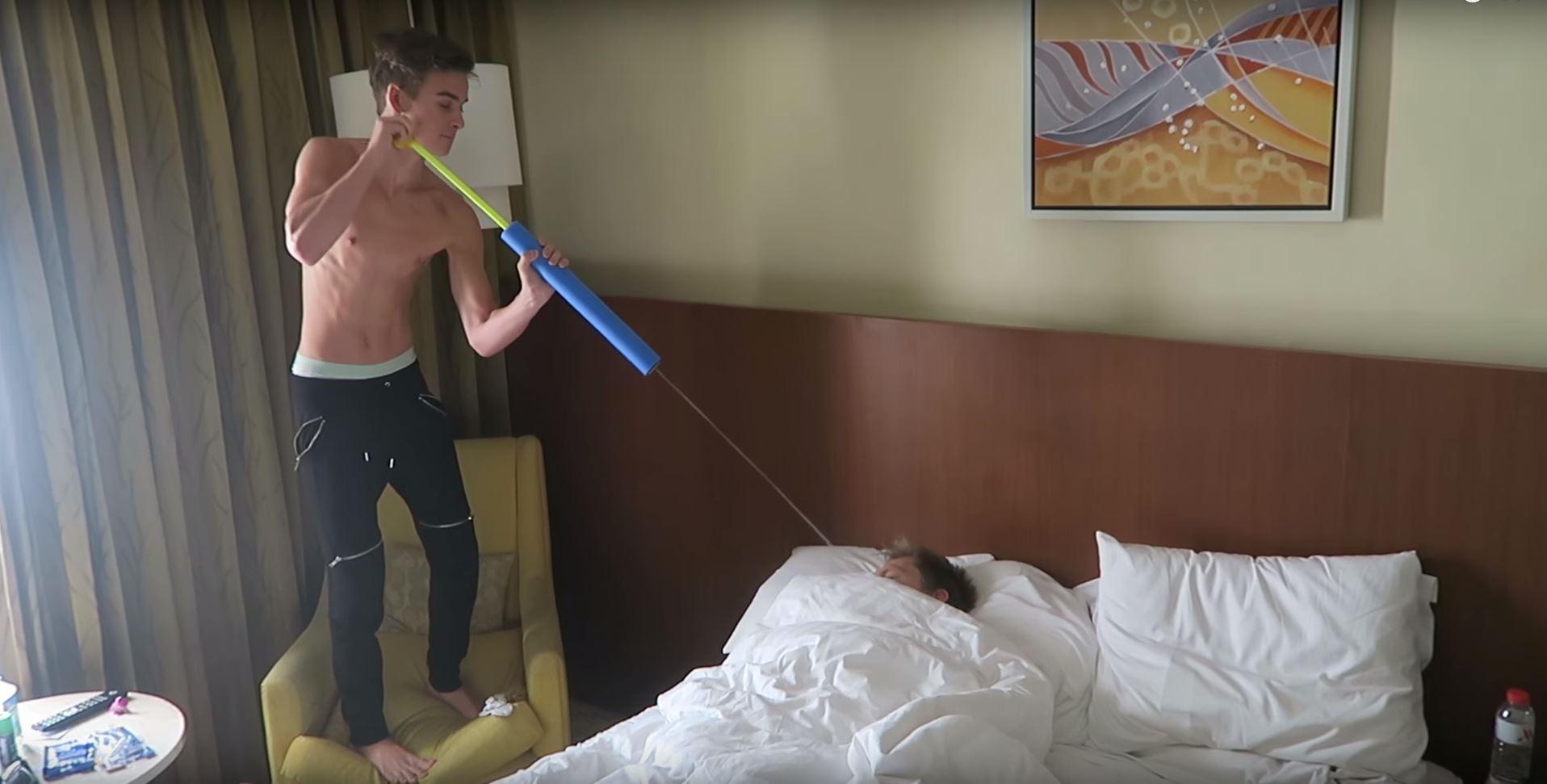 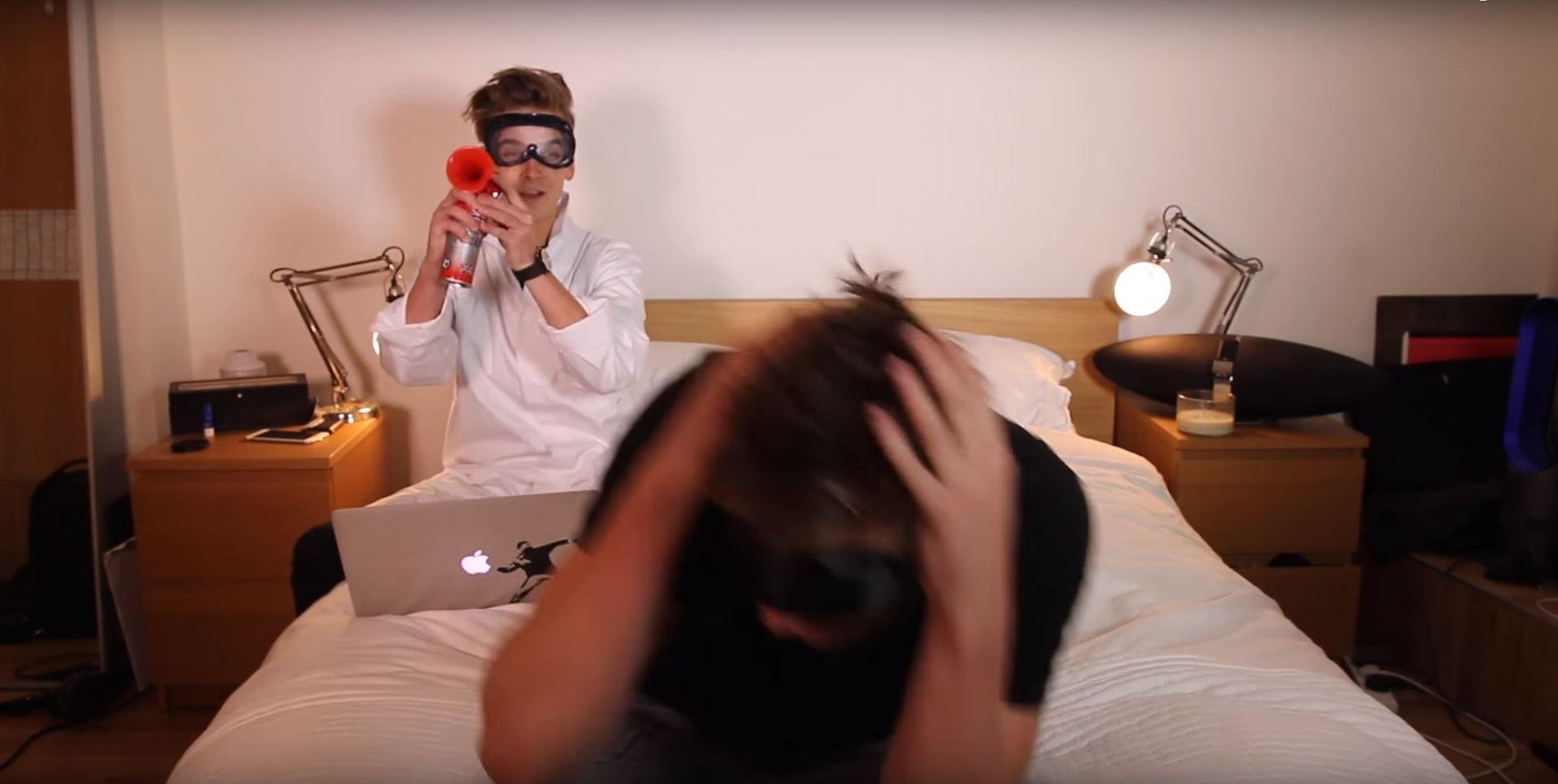 JOE tricks friends into thinking they’re taking part in a game where they’re blind- folded and have to guess the sound effect.

He then blasts a deafening air horn, much to the dismay of his victims.

JOE gets a spare key to Caspar’s new flat and covers every inch of the bedroom with clothes pegs – including his carpet, bed, curtains and TV and everything in his en-suite bathroom. 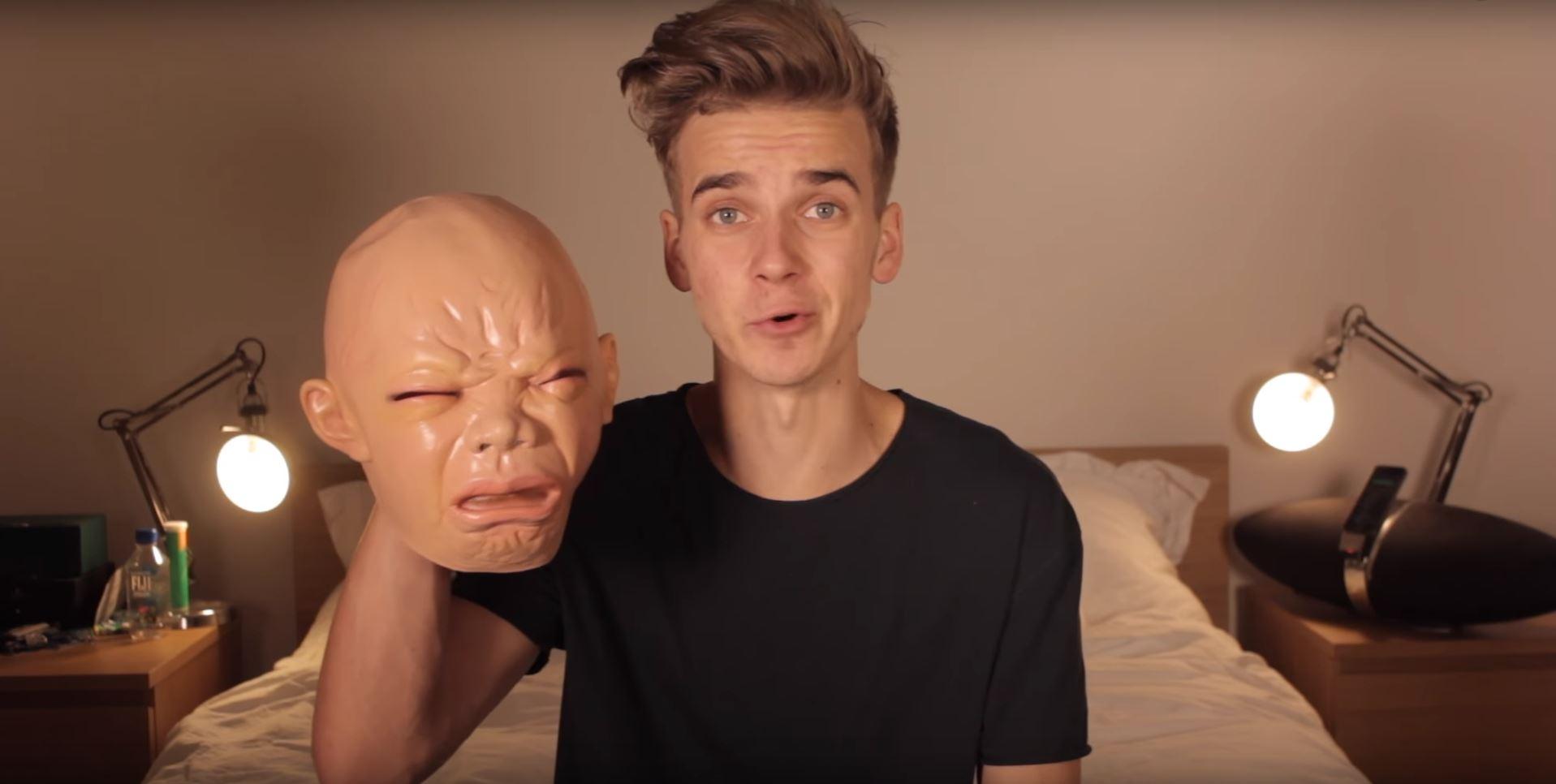 JOE dresses up as a giant baby in a mask and nappy to scare Caspar in the middle of the night.

He plays sounds of a baby crying as he pranks him. Caspar thought his roommate had gone away for the weekend. 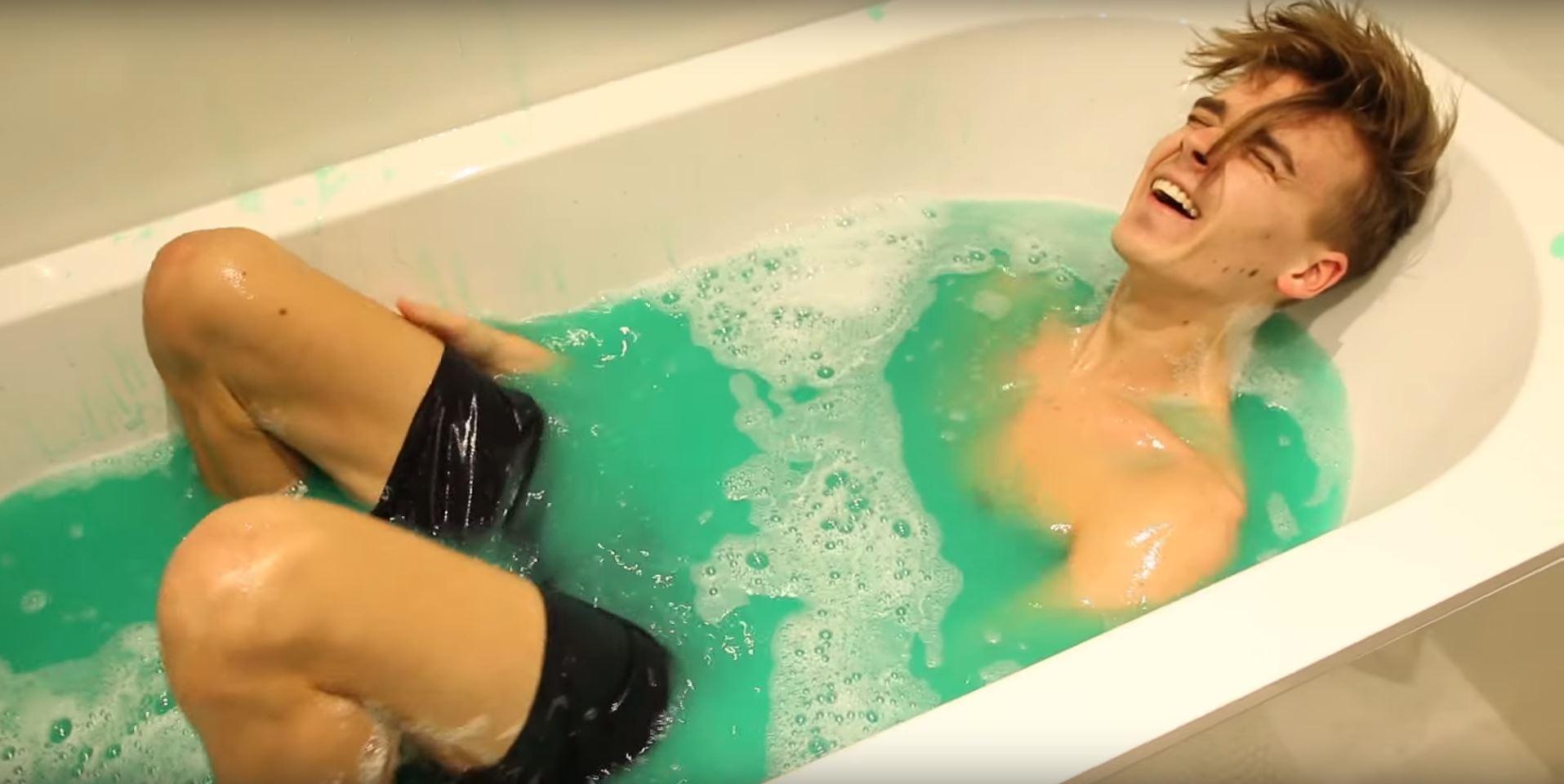 JOE screams as he gets into a bath full of Original Source Mint and Tea Tree shower gel – known to tingle men’s private parts – after taking on a challenge from the brand. 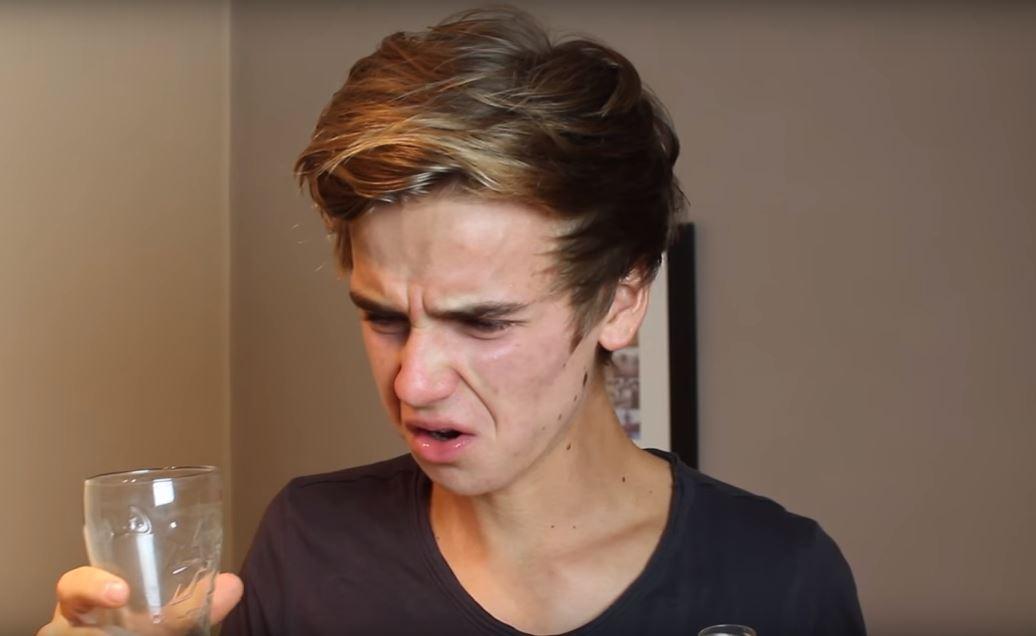 GIVEN the choice of either drinking his own wee or a bottle of double concentrate orange juice, he plumps for the latter, claiming he genuinely likes the taste . . . but he feels sick afterwards. 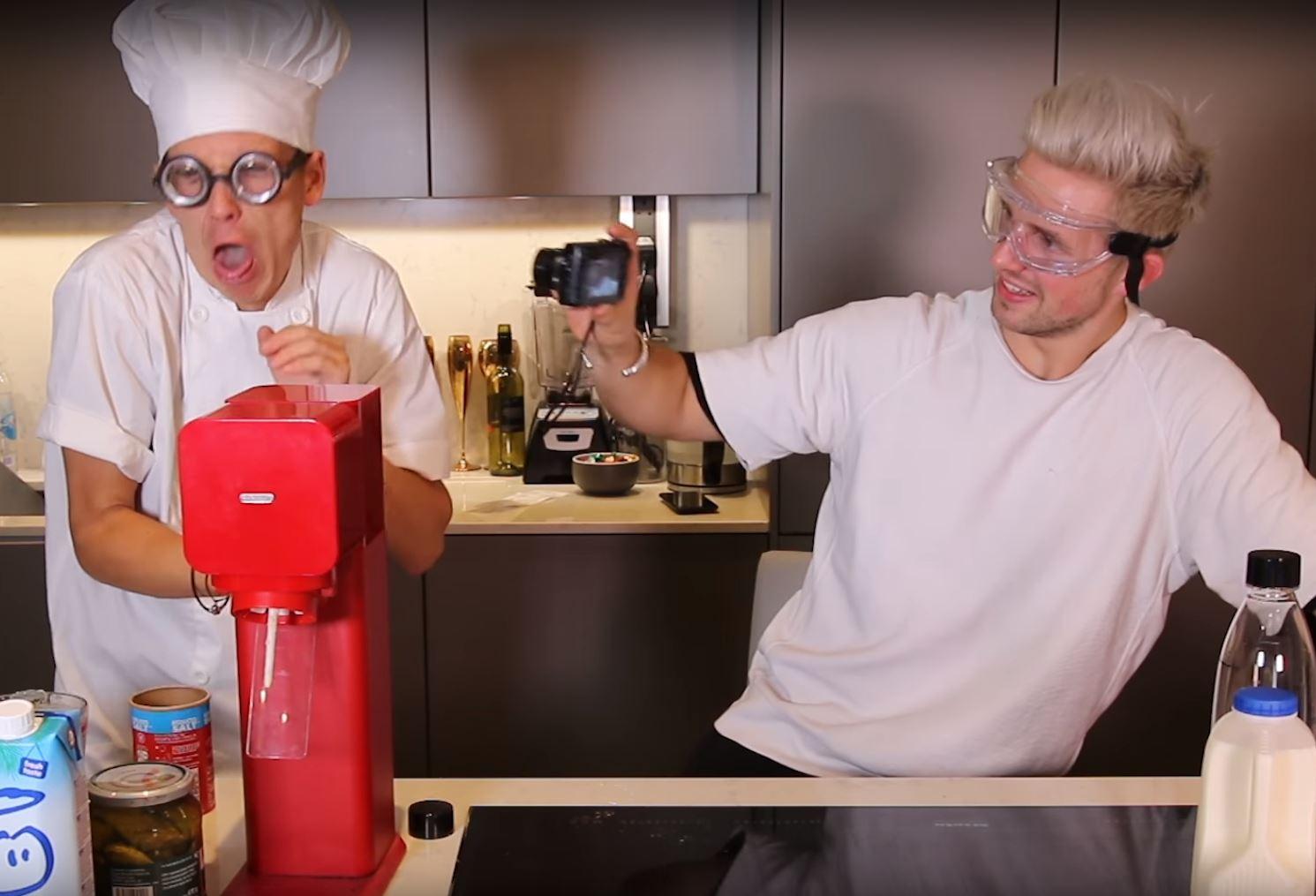 Then he and mate Marcus Butler pick from a hat to determine who has to drink what.