She might be leaving the chaos of The X Factor behind, but Nicole Scherzinger clearly loves herself a weird reality show.

The singer has signed up to judge a brand new singing competition on Fox in the US and it takes The Voice‘s concept of the judges not being able to see the performers to new extremes.

Based on a Korean show, The Masked Singer sees famous faces singing while covered head to toe in an elaborate costume and full face mask, in an attempt to hide their identity (according to Entertainment Weekly).

The judges and viewers then have to guess the identity of the singers with one being eliminated every week, at which point they will reveal their true identity.

Scherzy, who along with Louis Walsh is being replaced on the X Factor panel this year by Robbie Williams, Ayda Field and Louis Tomlinson, isn’t the only big name on the Masked Singer panel either.

She’ll be joined by The Hangover actor Ken Jeong, John Tucker Must Die star Jenny McCarthy and singer Robin Thicke behind the judges’ table, with Nick Cannon on hosting duties.

Of course we currently have no idea which celebs will be taking part in the show (that’s kind of the point) but Fox promises that between the contestants they have 65 Grammy nominations, 16 Emmy nominations and 16 multi-platinum albums. 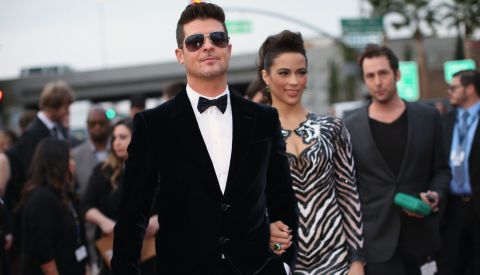 The standard should be pretty high then.

Fox executive Rob Wade is clearly excited about the show, calling it “truly one of the most unique, genre-defining formats I’ve ever seen”.

“There are very few hit formats left in the world, and when I saw The Masked Singer, which is a true global and viral phenomenon that has captured the world’s attention, I knew it had to be brought to life in America,” executive producer Craig Plestis added.