Schemes encouraging people to switch from cars to walking and cycling in London face a funding cut of nearly half a billion pounds as transport bosses warned they face a mammoth gap in their finances.

Transport for London (TfL) said all ‘uncommitted’ Healthy Streets projects – which can include new bus lanes, cycle lanes and improved walking routes – will be paused or cancelled as it revealed proposals to reduce the programme’s budget by £473million for the six years from 2019/20.

The transport body is also considering suspending the second phase of its Direct Vision initiative to protect vulnerable road users from lorries, as well as a planned fast ferry service between Rotherhithe and Canary Wharf.

TfL also faces a ‘£435million reduction in major projects’ meaning the Piccadilly line signalling upgrade and Jubilee line ‘optimisation’ are under threat, while there will also be cuts in the step-free access programme.

Its report said there are 45 TfL road network structures, bridges and tunnels with ‘interim safety measures’, and cited six examples that ‘represent a high risk to operability’ – including the Rotherhithe Tunnel fire and ventilation system renewal in South East London and the Croydon Flyover structural lighting renewal in South London.

Others examples were the A40 Westway in West London where 12 key bridge joint renewals are required, as well as steel fatigue issues on Vauxhall Bridge in Central London and Gallows Corner Flyover in Romford, East London, as well as structural condition improvements needed at Brent Cross in North London. 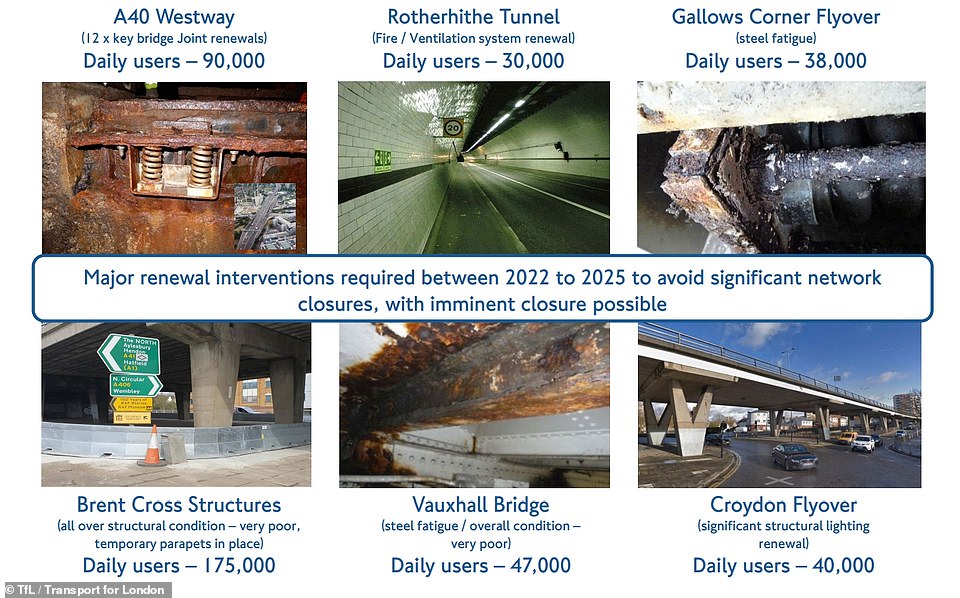 The report referenced 45 Transport for London road network structures, bridges and tunnels with ‘interim safety measures’, and cited six examples that ‘represent a high risk to operability’ – including in Rotherhithe, Vauxhall and Brent Cross 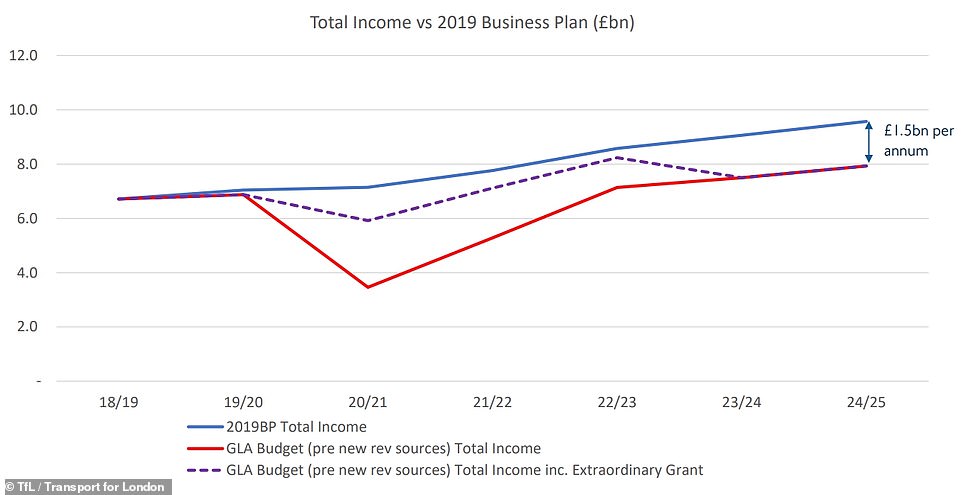 TfL estimates that revenue is expected to recover but will be £1.5billion per year lower than its pre-pandemic projections 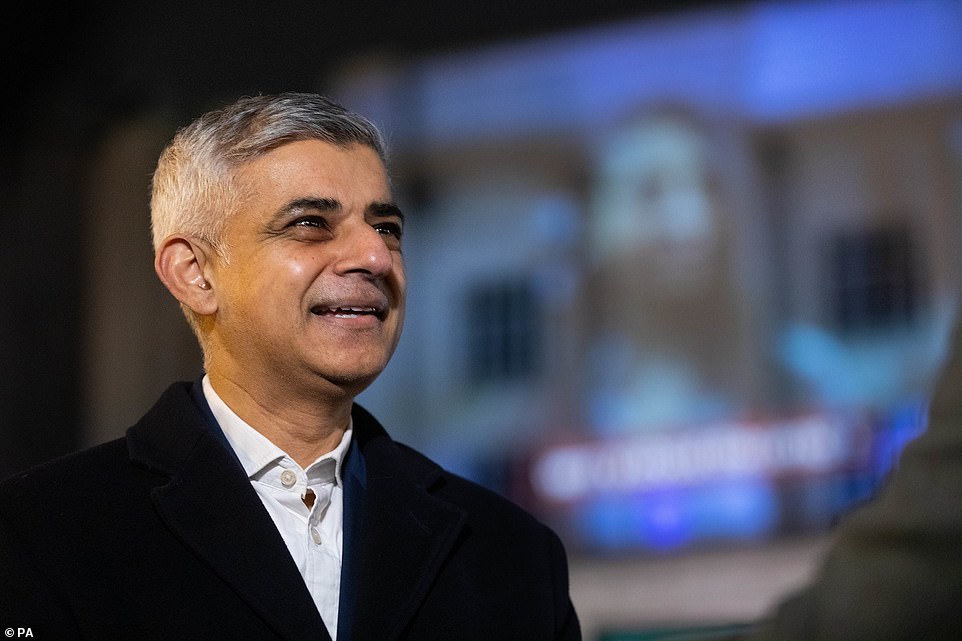 This Transport for London graph shows how Underground usage has changed over the last two years, split by type of station

TfL revealed it expects annual revenue from introducing a proposed emissions-based pricing charge for driving in London to reach £300million by 2024/25.

Mayor of London Sadiq Khan is proposing to launch a ‘clean air charge’ and/or expand the ultra-low emission zone.

What is TfL’s ‘Healthy Streets’ campaign?

Transport for London is working on a ‘Healthy Streets’ campaign with the intention of improving air quality and reducing congestion. It set out ten ‘Healthy Streets indicators’ to help inform how the project would work: 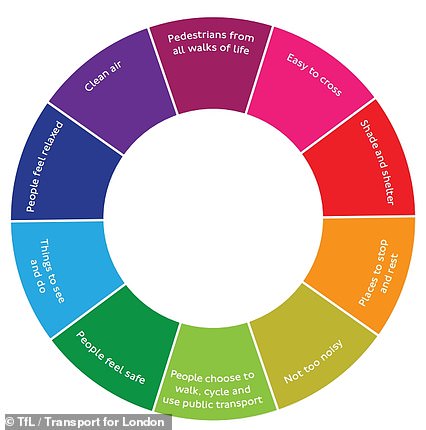 Pedestrians from all walks of life: London’s streets should be welcoming places for everyone to walk, spend time in and engage in community life.

People choose to walk, cycle and use public transport: Walking and cycling are the healthiest and most sustainable ways to travel, either for whole trips or as part of longer journeys on public transport. A successful transport system encourages and enables more people to walk and cycle more often. This will only happen if we reduce the volume and dominance of motor traffic and improve the experience of being on our streets.

People feel safe: The whole community should feel comfortable and safe on our streets at all times. People should not feel worried about road danger or experience threats to their personal safety.

Not too noisy: Reducing the noise impacts of motor traffic will directly benefit health, improve the ambience of street environments and encourage active travel and human interaction.

Easy to cross: Making streets easier to cross is important to encourage more walking and to connect communities. People prefer direct routes and being able to cross streets at their convenience. Physical barriers and fast moving or heavy traffic can make streets difficult to cross.

Places to stop and rest: A lack of resting places can limit mobility for certain groups of people. Ensuring there are places to stop and rest benefits everyone, including local businesses, as people will be more willing to visit, spend time in, or meet other people on our streets.

Shade and shelter: Providing shade and shelter from high winds, heavy rain and direct sun enables everybody to use our streets, whatever the weather.

People feel relaxed: A wider range of people will choose to walk or cycle if our streets are not dominated by motorised traffic, and if pavements and cycle paths are not overcrowded, dirty, cluttered or in disrepair.

Things to see and do: People are more likely to use our streets when their journey is interesting and stimulating, with attractive views, buildings, planting and street art and where other people are using the street. They will be less dependent on cars if the shops and services they need are within short distances so they do not need to drive to get to them.

The figures are part of a budget update which will be considered by TfL’s board today.

The document stated that the organisation is facing a £1.5billion gap in its finances by 2024/25 unless it receives additional funding.

It has repeatedly called on the Government to provide a long-term financial package due to the reduction in fare revenue caused by the coronavirus pandemic. The latest bailout expires on Friday.

A spokesman for Mr Khan, who chairs TfL, said: ‘This is a small window into the stark reality of the financial crisis facing TfL, just days away from the current Government funding deal expiring.

‘Without a new, sustainable long-term funding deal there is a real risk of major projects being paused, cuts to services, trains falling into disrepair and closures on major road networks – all of which would disrupt services for hundreds of thousands of people and stifle the economic recovery of London and the country.’

The Department for Transport (DfT) has previously insisted it has ‘repeatedly shown its commitment’ to supporting TfL during the pandemic by providing ‘more than £4billion in emergency funding’.

‘If we’re to have a shot at reaching these targets, getting more people walking and cycling for shorter journeys is crucial. But this will be all the harder if Transport for London’s Healthy Streets budget is cut.

‘This budget update adds yet more urgency to the Government and City Hall agreeing a sustainable, long-term funding deal for Transport for London.

‘Without a funding settlement, we will struggle to build safe, well-designed routes that support people to walk and cycle more.’

The pandemic left London’s transport system deserted for months on end, decimating revenues and sparking an ongoing feud between Mr Khan and the UK government over funding current shortfalls.

TfL – which runs the Underground network, buses, trams and river boat services – has received billions of pounds from central government in the last two years to stay afloat.

That followed passenger numbers across the network slumping as people were repeatedly told to stay home to stop the spread of Covid-19.

Now, as numbers pick up again with the easing of all restrictions, the Conservative government has urged London’s Labour mayor to find a sustainable funding model for state-owned TfL.

The issue has come into sharper focus as central government subsidies maintaining the current level of service are set to expire without renewal this Friday.

Mr Khan has raised the prospect of service cuts or even the closure of a Tube line without new funding support, arguing TfL is ‘fundamental to the success of the capital’.

‘It is so important that the government urgently comes forward with the long-term funding TfL desperately needs so we can keep services running and deliver much-needed improvements to our transport infrastructure,’ he warned earlier this month.

The Labour party mayor, re-elected last year for a second term, is reluctantly proposing to raise the compulsory housing tax in the next budget, which he has said would ‘unfairly punish Londoners for the way the pandemic has hit our transport network’.

He wants the government to inject around £1.7billion to fund TfL until April 2023.

However, the Department for Transport has said Mr Khan is responsible for getting the system ‘back onto a sustainable financial footing in a way that is fair to taxpayers, rather than continuing to push for bailouts’.

‘We will continue to discuss further funding requirements with TfL and the Mayor,’ a spokesman said this week.

The standoff reflects the inevitable rivalry between Mr Khan, touted as a potential future Labour leader, and the government of Prime Minister Boris Johnson, himself a former London mayor. 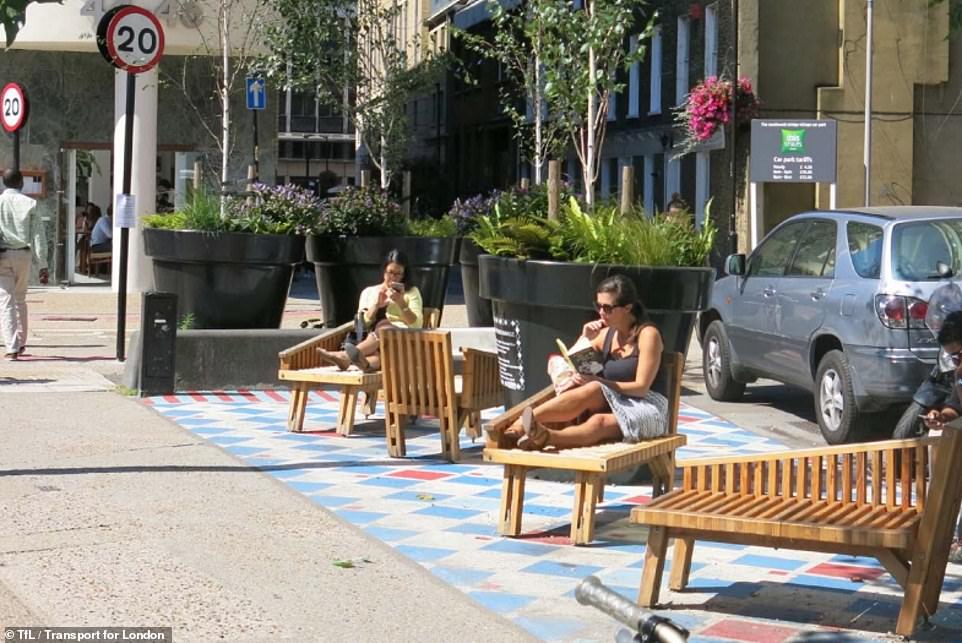 This image taken in Southwark, South London, was used as the front page on a Health Streets document from TfL 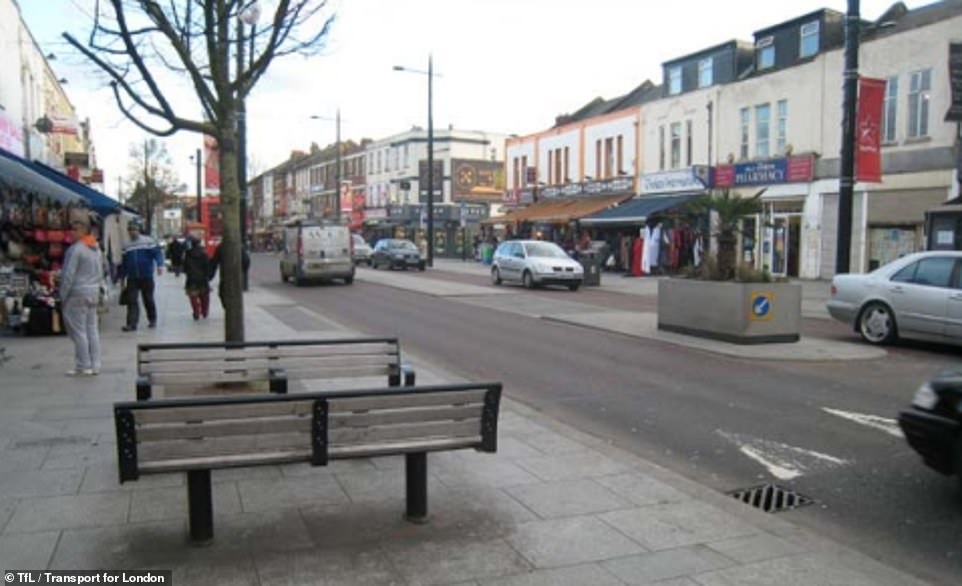 TfL has built benches as part of its ‘Healthy Streets’ initiative – including in Ealing, West London, to ensure walkers can rest 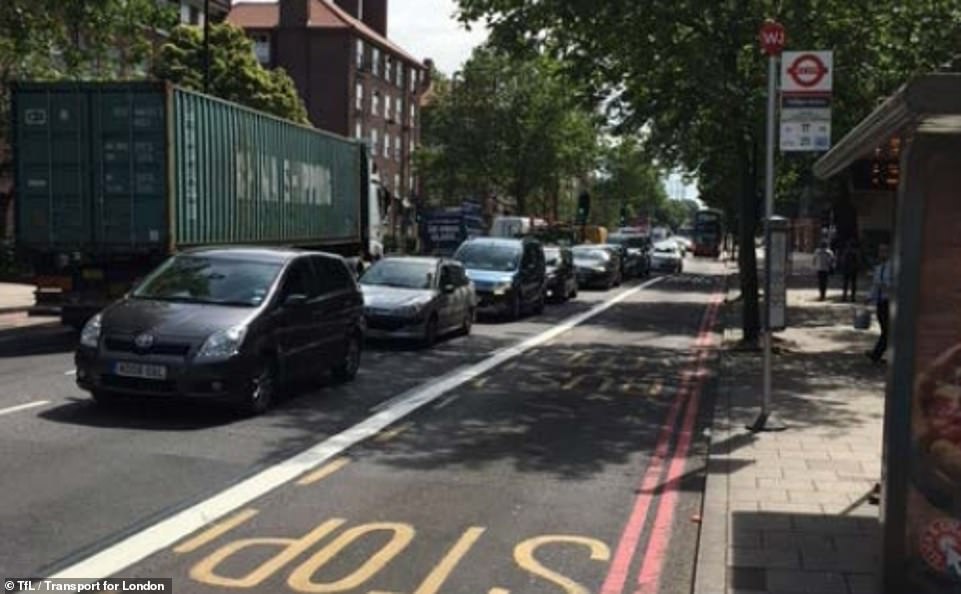 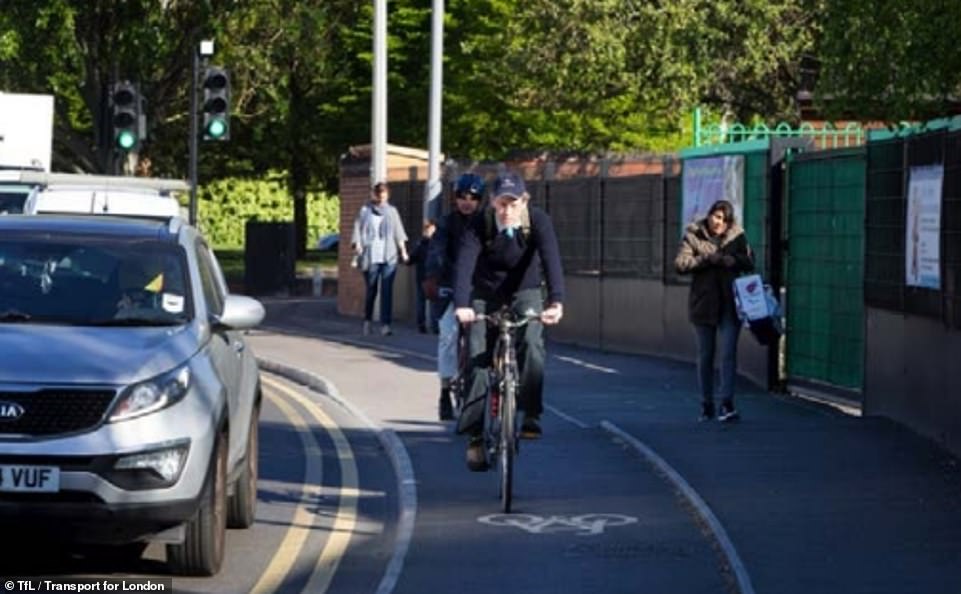 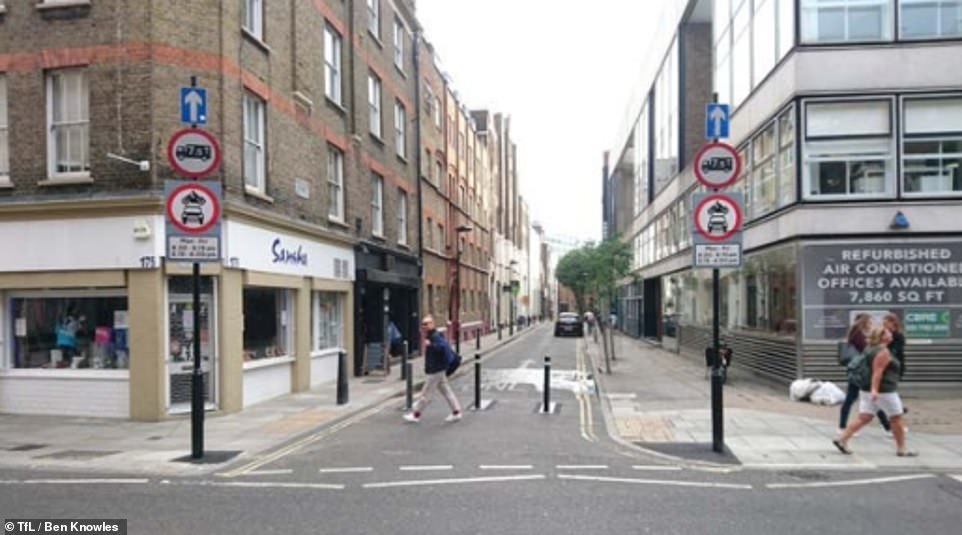 Closing the street around schools to traffic at the start of the day is now a feature of Macklin Street in Camden, North London

Both have accused each other of mismanaging the capital’s extensive transport system. TfL notes the pandemic has ‘devastated’ its accounts, with fares revenue falling by 95 per cent at the height of the first coronavirus wave in 2020.

Are journeys recovering on TfL Tubes and buses?

Transport for London said there were 2.04million Underground journeys made on Monday, which is up 9 per cent in a week, but still only 54 per cent of pre-pandemic levels.

On the buses, there were 4.41million journeys on Monday, which is up 4 per cent in a week, and at 74 per cent of pre-pandemic levels.

At Westminster Tube station specifically, there were 26,000 entries and exits on Monday, which was up 13.7 per cent in a week but still at just 44 per cent of pre-pandemic levels when compared to the 59,000 on Monday, February 3, 2020.

At stations with close links to the City, such as Mansion House, Aldgate, Canary Wharf and Holborn, there were 359,000 entries and exits in total on Monday, which is up 14 per cent in a week, and 40 per cent of pre-pandemic levels.

And at shopping and West End stations, such as Stratford, Tottenham Court Road and Oxford Circus, there were 470.9,000 entries and exits in total on Monday, which is up 7 per cent in a week, and 55 per cent of pre-pandemic levels.

Weekday passenger numbers were at 50 per cent of pre-pandemic levels on the Tube and 70 per cent on buses in mid-January, with TfL expecting them both to reach 80 per cent this year.

It has been forced to dip into its cash reserves to keep services running while going cap in hand to the government for support.

Mr Johnson’s administration has already pledged £4billion in subsidies to keep the system running, as well as £600 million in loans.

The financial crisis has also affected the capital’s new east-west Crossrail route, formally known as the Elizabeth Line, with the stretched budget adding to delays and costs.

Other global cities have faced similar struggles, including Ile-de-France Mobilites (IDFM) in the Paris area, which needed government support in its 2020 and 2021 budgets.

But TfL, which gets nearly two-thirds of its operating income from fares – a much higher proportion compared to New York or Paris, where it is more like 40 per cent – has been left especially exposed.

‘Some cost-cutting measures are on the table now,’ he said, adding dramatic line closures were unlikely but minor service changes ‘might happen’.

‘TfL needs to play a delicate game,’ Mr Fujiyama told AFP. ‘The central government would not give blank cheques, and the TfL would need to demonstrate their effort, whilst the mayor knows that dramatic service reduction would be politically costly.’

With the threat from the Omicron variant now receding, passengers are returning to the system, aiding revenues but still leaving a large gap to plug.

Weekday passenger numbers were at 50 per cent of pre-pandemic levels on the Tube and 70 per cent on buses in mid-January, with TfL expecting them both to reach 80 per cent this year.

The organisation has said it is exploring a number of ways to boost income, including through efficiency gains, commercial property projects and consultancy services.