178 people every day feel like they can’t be here any more. I was one of them

In a moment of severe mental ill-health I made the decision to not be here tomorrow. It’s the single biggest mistake of my life and something I have regretted ever since.

I’d lost everything. My business went bust, I was bankrupt and my reputation and sense of identity were shattered. I felt overwhelmingly that I had let a lot of people down. I was lost. The feeling of complete shame and utter sadness was overwhelming. I thought I was very clear about one thing: everyone around me would be better off if I wasn’t here. I was nothing but a burden. 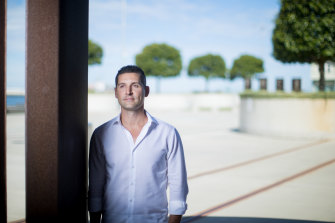 Like 65,000 other Australians every year, I attempted to take my own life. I was one of 178 people every day who wrongly believe they won’t be missed – 178 people who feel so hopeless they don’t realise the devastation they would cause to their families, friends, colleagues and loved ones.

Sadly, nine people die by suicide in Australia every day, leaving a trail of heartbreak and pain in their wake. That includes a never-ending internal dialogue of guilt. What else could you have done to help them? How did you miss the signs? The eternal “what if” for those left behind.

Despite the frightening number of people with darkness and pain that feels unbearable, we still don’t talk about it openly. Suicide is uncomfortable and confronting. People hide their stories and struggles for fear of being shamed and ostracised.

That used to be me.

So here it is. My name is Matt Berriman and I grew up in Wodonga on the border of regional Victoria and NSW. I moved to Melbourne as a teenager to pursue my passion for cricket and worked as a professional sportsman as a young adult. I’m a hard-working, loyal and empathetic person, but I’ve been told I can be a pain in the bum when I want to be – a combination of traits that held me in good stead professionally but impacted my ability to recognise and seek help early on.

I was first diagnosed with bipolar disorder in 2017, six years after being misdiagnosed with depression. I was 33 at the time, living in London and running a global multimillion-dollar start-up. The pressure was immense and it was a daily struggle to keep mentally well.

I was the leader of a successful business and was negotiating with high net-worth investors every day. I couldn’t afford to have anyone doubt me professionally, so I hid it. Like most people dealing with mental ill-health I was exceptional at putting on a mask, playing the part in public and falling to bits in private.

The darkness and depression had become overbearing. Initially I tried to manage it myself with exercise, alcohol (which I strongly don’t recommend), music and anything that would moderate my mood to try to find some peace. But it was always there, bubbling away under the surface.

As things got harder, I worked with medical experts to try to get better. I tried 15 different types of medication, had electrotherapy treatment, transcranial magnetic stimulations and multiple hospital stays. Nothing gave me the relief I needed, and I decided that if this is what life looked like, it wasn’t a life I wanted to live.

Wrongly, I thought my actions would bring peace to me and everyone I loved. I got my affairs in order and tried to take things into my own hands on that near fateful night a couple of years ago.

Waking up from my attempt is the best gift I’ve ever been given. I’ll never forget the mental health nurse at the emergency department telling me in his thick Scottish accent, “I’ve read your file, you seem pretty good at sport and business, but you’re pretty shit at killing yourself. In my decades of experience, those who survive an attempt go on to make a difference they would never have thought possible.”

I vowed in that moment to make that a reality in any way I could. Of course, that reality didn’t come from one single conversation or moment of clarity. For me it’s been a dedicated and conscious effort to prioritise my health. I meet with psychologists and psychiatrists weekly and treat my bipolar with small doses of ketamine, which are prescribed by a doctor and require a permit. I look after myself physically, which means minimising alcohol and exercising regularly. And I have a strong support network who know what to look out for and how to check in with me.

In December, I took on the role of chair of Mental Health Australia. It’s a post I hope to leave one day with a country in better mental health than when I started. Not only does that include fewer deaths, but a change in how mental illness is perceived and understood.

I hope that Australians can start to see mental ill-health through the lens of empathy, not judgment, that people struggling with any kind of mental illness can see there is always hope, even if you can’t see it at the time.

Hope to me is like a beacon of light. Life will never be perfect and knowing that nothing is permanent changes everything. I am living proof. Attempting suicide was the worst decision of my life and I wish I’d known then what I know now: there are people who love you and want you around.

Your family, friends, colleagues and incredible support services like Lifeline and Beyond Blue want to help you so please, don’t give in. Take it from me, one of the 178. Give yourself the chance to see that hope exists. Be here tomorrow.

If you or someone you know is experiencing a personal crisis, please contact Lifeline on 13 11 14 or lifeline.org.au.