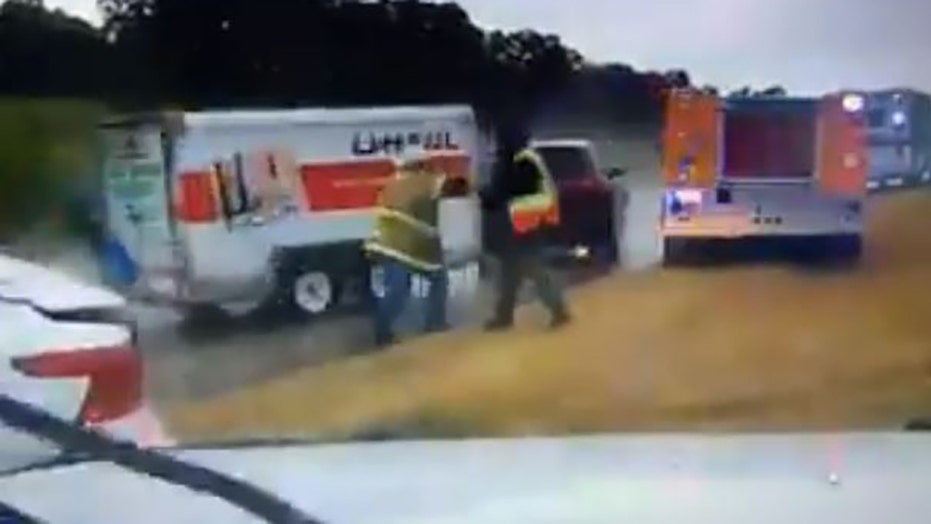 Drivers in Oklahoma are being asked to slow down on wet roadways after officials released dramatic dashcam video of an SUV losing control and slamming its U-Haul trailer into two firefighters responding at the scene of a crash.

The two men with the Stringtown Fire Department were standing on the side of the road when the oncoming vehicle appeared to hydroplane, shows video posted by the Oklahoma Highway Patrol. The spinning SUV struck the side of a parked first responder vehicle on the shoulder, causing the trailer to whip around and smash into the two men.

The firefighter facing the out-of-control vehicle appeared to raise his arms in an attempt to push the other man out of the way before the trailer sent them flying several feet away.

The firefighters “miraculously” suffered no broken bones and walked away with only bruises, authorities wrote on Facebook.

“This is a graphic reminder to slow down, especially when roads are slick and you see flashing lights,” the police said.

Oklahoma’s “Move Over” law requires drivers approaching emergency and law enforcement vehicles to move over to another lane or slow down to “a safe speed,” dependent on existing road condition. Florence Pugh admits trolling made her 'feel like s**t'
We and our partners use cookies on this site to improve our service, perform analytics, personalize advertising, measure advertising performance, and remember website preferences.Ok