511 tower blocks planned for London skyline as planners say nothing

Towering monstrosities: Britain is being carpeted by vast, ugly tower blocks – many of which are bought by foreigners and left empty. Shamefully, says SIMON JENKINS, planners are doing nothing about it

Everyone likes a good tower, but not in their back garden. I love the towers of Siena and San Gimignano. I can thrill to the skyscraper clusters of Manhattan and Dubai.

I admire the City of London’s cluster of stumps, and might even like the Shard were it not casually shoved into Bermondsey.

But I do not love the ugliness that is now spreading at random along the banks of the Thames, or the squalor it has inflicted on London’s skyline.

No one ever asked me if this is how I wanted my city to look — and never asked anyone else either. Apparently we have seen nothing yet.

The latest news from New London Architecture, the only body keeping a record on London’s burgeoning towerscape, is sensational.

There are planned to be 511 more towers of 20 storeys or more added to the London horizon. 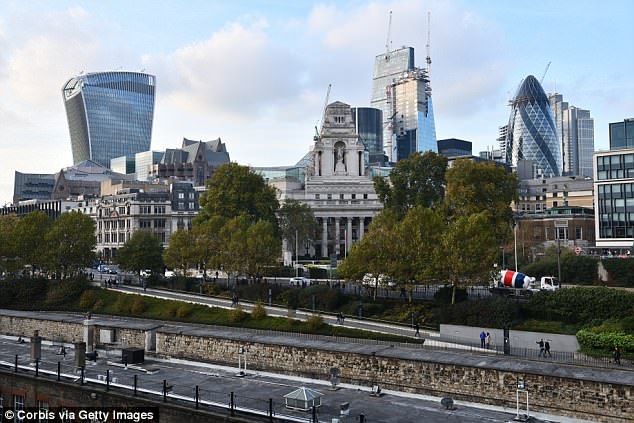 At the turn of the century, there were 30. Two years ago, 115 were planned or under construction. Now it is to be more than 500.

London will look like a field of giant stubble. It is the planning philosophy of the Wild West. I have seen no plan published for this proliferation.

I suspect there is none. London must accept a tower wherever a developer happens to want one, and can bribe a local council with a few ‘affordable housing units’ on or near the site.

The only bizarre rule is that towers cannot get in the way of selected views of St Paul’s Cathedral, as from Hampstead, the Thames or Richmond Park.

Former policies, such as no towers round royal parks, towers clustered only in one or two places and none forming a ‘cliff’ behind St Paul’s, have all been abandoned. Nor is London alone in England.

Manchester is facing a 40-storey slab devoid of any quality beyond monstrosity, backed by the ex-footballers Gary Neville and Ryan Giggs.

It will loom over the city centre like something from outer space, while acres of inner suburb lie derelict. 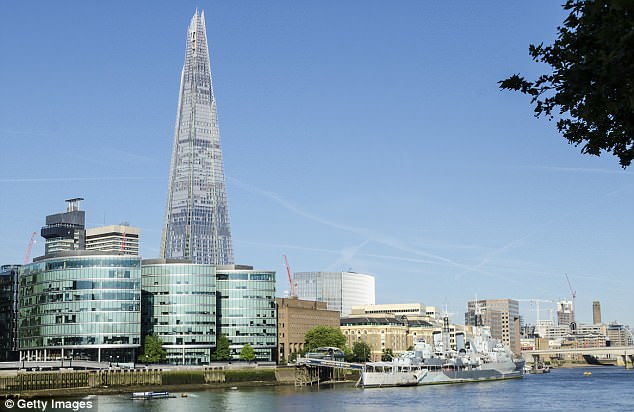 At the turn of the century, there were 30. Two years ago, 115 were planned or under construction. Now it is to be more than 500. Pictured: The Shard next to the River Thames

In Bristol, a 26-storey tower is being allowed next to Castle Park, defying a policy of no building higher than nine storeys.

A 25-storey tower is proposed for the heart of historic Norwich, as if the city fathers were desperate to outdo William the Conqueror’s famous castle.

Since the turn of the 21st century, these towers have been ‘iconic’ to local politicians. They are viewed as harbingers of wealth, even if much of the wealth is funk money from foreign dictatorships.

They are loved by London mayors sated on vanity and virility. Ken Livingstone wanted London to look like Manhattan.

Boris Johnson loved towers so much that in 2014 he went to Malaysia and tried to promote the gigantic Battersea power station development as some sort of ‘inward investment’.

He seemed to equate an empty tower block to a machine-tool factory.

In the same cause, Liverpool, ten years ago, planned 50 towers, some of them sporting huge wind turbines.

A pillar of luxury flats seemed to embody the new glitzy, glamorous urban machismo. It made your city look like a capital.

These structures have nothing to do with housing need or land shortage. Almost all are ‘luxury residential’ and, at least in London, are investments with few permanent residents.

They are at best pied-á-terres. Most estimates are that 60 per cent of prime London sales go to foreign buyers, most of these as so-called ‘buy-to-leave’. 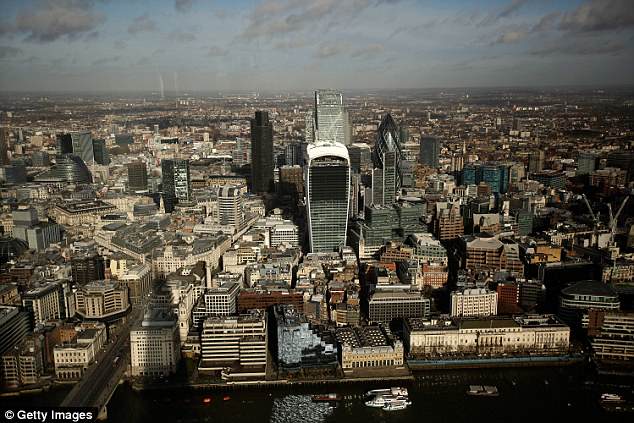 London will look like a field of giant stubble. It is the planning philosophy of the Wild West, writes Simon Jenkins

This means they are not intended for occupation and are often traded ‘off plan’ before even being built.

Yet so dumb is British planning that they are still classed as ‘meeting housing need’.

A tower is a property developer’s ‘signature’, easy to sell at the investment auctions in hotels in Kuala Lumpur, Singapore and Hong Kong.

The towers’ virtue to investors is precisely why they are death to city vitality.

They are locked, gated, anonymous and family-hostile. No one is about to care if they are empty or blight their communities.

The former City of London planner, Peter Rees, told me he pleaded for new City towers to be offices, ‘because at least they would be occupied during the day’.

In his own Heron Tower, a quarter of the flat keys had never been collected.

The 50-storey Vauxhall tower — which even London’s planners rejected until mysteriously over-ruled by then deputy prime minister John Prescott — was recently shown to have just ten per cent of its occupants on the electoral register.

No one can tell what may happen to these investments when the current slump in London property prices really bites.

Thousands of flats valued at over £1 million must exceed any plausible residential demand.

The view of the property industry is that high service charges will stop this happening.

More likely to happen is that, like the palazzi of Venice, the blocks will simply sit decaying as nest eggs for laundered cash. 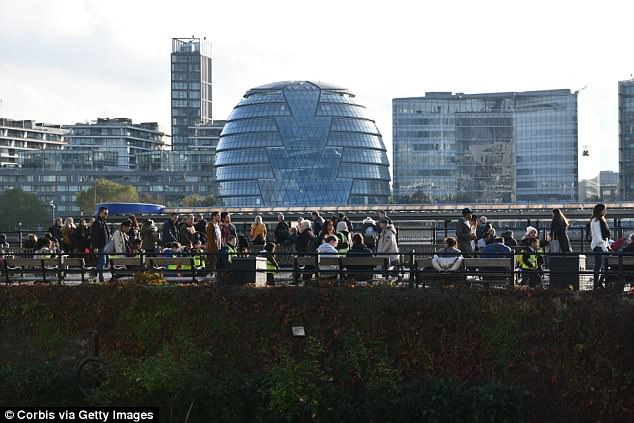 Many tower blocks in London are not intended for occupation and are often traded ‘off plan’ before even being built. Pictured: London’s City Hall

There is no doubt that smart urban renewal requires higher densities, so as to use existing infrastructure and not spread car-based settlements over surrounding countryside.

London boasts the lowest housing densities in Europe, just a quarter of central Paris. But that is because so much of its housing is just three or four storeys, rather than the eight to ten-storey apartment buildings of most cities.

Britain’s urban housing is profligate in its use of space. Britons have 2.5 rooms each, as against 1.5 in the Seventies.

In London, according to the 2011 census, there were more bedrooms in London than people, a surplus that is accelerating.

The reason is high stamp duty and the Eighties abolition of steeply graduated rates. Stamp duty is a tax on transactions of any sort, and discourages older people from downsizing.

The way to galvanise London’s housing market is to tax property and end stamp duty — rather than subsidise inefficiency. To this argument, towers are irrelevant.

Even if they are full, they rarely offer higher densities than traditional Victorian terraces. Westminster’s absurd, and mercifully aborted, 72-storey ‘Paddington pole’ had fewer housing units than a rival street-based plan.

As for alternatives to towers, there is no mystery. Anyone seeking ‘high-density, low-rise’ need go no further than to London’s King’s Cross.

Here, smart planning has delivered a fusion of old and new, work space and play space, nature and community — at some of the highest densities in London.

An American friend gazing at the London horizon from Waterloo Bridge asked me if the mess was all down to corruption.

I had to explain that in London planning was so bad it had no need of corruption. Some developers offer ‘planning bribes’ such as a dribble of cash for a local primary school or a few ‘affordable’ flats.

The reality is that planners and councillors simply lack the guts to stand up to developers, and mayors and ministers give them no incentive to do so. 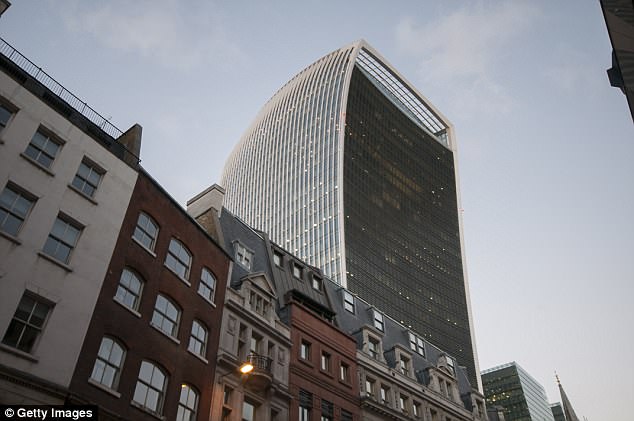 Yet so dumb is British planning that they are still classed as ‘meeting housing need’, writes Simon Jenkins. Pictured: Hong Kong-owned Walkie Talkie

No other city in Europe would have permitted London’s top-heavy Walkie-Talkie or the ‘pregnant’ One Blackfriars.

Their bulging upper storeys are not meant to be beautiful. They are purely to maximise rents.

Tall buildings are conspicuous features of any city and should fit into some coherent urban design.

This would be second nature in France, Italy or Germany. Rome is the most corrupt place I know, but even Romans would never do to the Tiber what London has done to the Thames.

Londoners entrusted their rulers with a skyline that would have been recognisable to the 18th century Venetian-born painter Canaletto.

They will be given back one recognisable only to the American abstract impressionist Jackson Pollock.

Some people may like towers as a form of urban sculpture. So be it, but that is no reason for their preference to be imposed on everyone else in perpetuity.

Towers are bland if not ugly, and are the enemies of social vitality. They are the opposite of street life, silent stakes driven through a city’s sense of community.

They are mere memorials to Britain’s greed for foreign cash in the 21st century, and to a newly philistine public realm.

Simon Jenkins writes for the Guardian, in which a version of this article appeared.