A pensioner who was the victim of scammers will be able to go on holiday thanks to kind-hearted members of the public.

A crowdfund appeal was launched to raise cash for Janet Jotham to go Appledore in Devon – her first getaway since 1960.

The 80-year-old who has suffered from breast cancer and had two hip-replacements, saved up £750 , but fell victim to opportunistic scammers who coerced her into handing over the cash for ‘tree maintenance’. 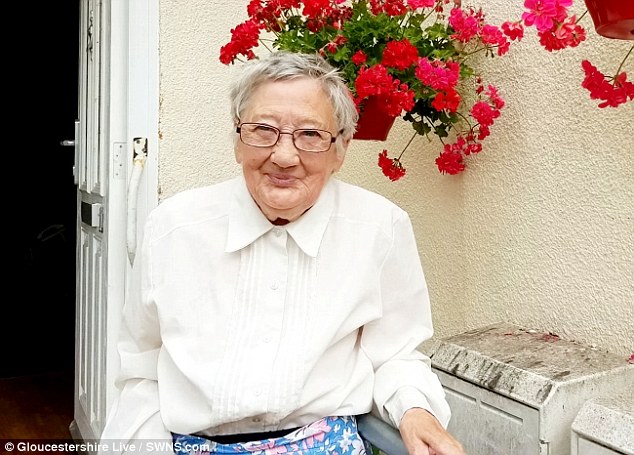 Janet Jotham was conned out of her £750 holiday savings by three men claiming to be from the council. Thanks to generous members of the public donating to a crowdfunding page, she will be going to Appledore in Devon

The men pretended to work for the local authority as contractors, and talked their way into Mrs Jotham’s home in Matson, Gloucester, on July 5 before convincing the pensioner to borrow cash from a friend to pay for the work – which they did not do.

Mrs Jotham said: ‘The money that I gave them was meant to be for my holiday.

‘They showed me a card and said that they were from the council and that they had to cut the hedges in the garden.

‘The man who I thought was the boss sat in the armchair and said that he would not charge a lot for the work but he took the cash.

‘I didn’t have it on me so I asked my friend to lend it to me.

‘I had to pay my friend back with the money that I had been saving for holiday’.

She added: ‘I thought that the men were contractors that are employed by the council to carry out work.

‘The whole thing has left me worried, shaken and I can’t believe that this happened.’

The three conmen claimed they ‘would not charge her a lot’ for carrying out the work, and demanded the money up front.

The ringleader then took the cash and disappeared into the garden, before he and the two other men got into a white transit van and left.

Mrs Jotham was planning to go away to Cornwall with her son Stephen, 52, who cares for her alongside his brother Morris. 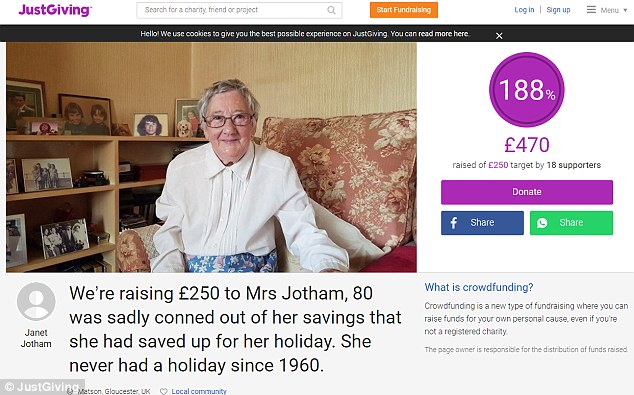 Mr Jotham said: said: ‘I went to collect the holiday money from mother’s house and she explained to me what had happened.

‘She said she gave the money to men that said that they were going to cut the hedges.

‘I went outside and it is clear that they had done nothing.

‘It made me angry, in fact I was livid that they would do this to a frail and vulnerable lady.

‘I said to mum that she had been fleeced and she was so upset.

‘She has been left distraught and I can not get my head around how they could do that to someone.

‘Since this happened we have had cameras put up.

‘You just can not take people at face value.

‘If anyone comes to your door claiming to be from the council and they do not have any identification then tell them no.’

Gloucestershire Police said in a statement: ‘We were called last Thursday (5 July) to reports of men impersonating council workers in the Matson area of Gloucester.

‘It’s believed that one resident was targeted by a group of three men claiming to be council staff who could undertake tree maintenance at the victim’s property.

‘The victim gave the men £750 to undertake the work before they left in a white transit van and never came back.

‘We are asking for anyone who was in the area at the time or witnessed this to get in contact by calling 101 with incident 298 of 5 July.’

A JustGiving page has been set up to raise funds for Mrs Jotham to go on holiday, and so far £470 has been donated. Simon Rimmer: Sunday Brunch host hits back at co-star Tim Lovejoy for mocking move at home
We and our partners use cookies on this site to improve our service, perform analytics, personalize advertising, measure advertising performance, and remember website preferences.Ok