‘A blueprint’: World’s biggest plant to pull CO2 from the air is up and running

Brussels: A major new facility to pull carbon dioxide out of the atmosphere is now operating in Hellisheidi, Iceland, a boost to an emerging technology that experts say could eventually play an important role in reducing the greenhouse gases that are warming the planet.

The carbon capturing plant, perched on a barren lava plateau in south-west Iceland and opened on Wednesday, is the biggest of its kind, its builder says, increasing global capacity for the technology by more than 40 per cent. Many climate experts say that efforts to suck carbon dioxide out of the air will be key to making the world carbon-neutral in the coming decades. 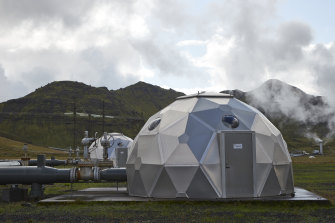 By 2050, humanity will need to pull nearly a billion tonnes of carbon dioxide from the atmosphere every year through direct air capture technology to achieve carbon-neutral goals, according to International Energy Agency recommendations from earlier this year. The plant in Iceland will be able to capture 4000 tonnes annually – just a tiny fraction of what will be necessary, but one that Climeworks, the company that built it, says can grow rapidly as efficiency improves and costs decrease.

“This is a market that does not yet exist, but a market that urgently needs to be built,” said Christoph Gebald, a corkscrew-haired Swiss engineer who co-founded and co-directs Climeworks. “This plant that we have here is really the blueprint to further scale up and really industrialise.”

For now, the Icelandic installation, which is called Orca – phonetically the same as the Icelandic word for “energy” – is an unlikely global saviour. Human-sized fans are built into a series of boxes that are the size of standard 40-foot shipping containers. They sip carbon dioxide out of the air, catching it in spongelike filters. The filters are blasted with heat, about the same temperature needed to boil water, freeing the gas. Then it is mixed with water and pumped deep into underground basalt caverns, where over time it cools down and turns into dark-grey stone. 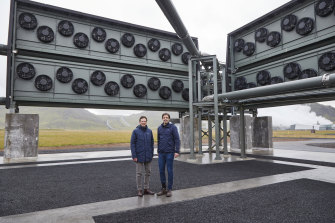 It is a straightforward chemical reaction: taking the carbon dioxide that is causing global warming out of the air and tucking it away where it can do little harm.

Pumping CO2 into the ground is just one way to dispose of it. It can also go to other uses. Energy companies can mix the carbon dioxide with hydrogen to make fuel. Farmers can feed their plants with it. Soda manufacturers can use it to fizz their drinks – something a Swiss customer of Climeworks did a few years ago when there was a carbonation shortage.

At the moment, the costs are high: about $US600 to $US800 ($813 to $1084) per tonne of carbon dioxide, Gebald said, far from the levels around $US100 to $US150 per tonne that are necessary to turn a profit without the help of any government subsidies. The costs reflect both the hand-hewn nature of the technology – Climeworks’ installations are mostly built by hand for now, not through automation – and also the large amounts of energy needed to power the CO2 capture process.

The Orca installation was built in Iceland because the tiny island nation has ample supplies of climate-friendly geothermal energy and just the right underground geology to make it easy to capture carbon. 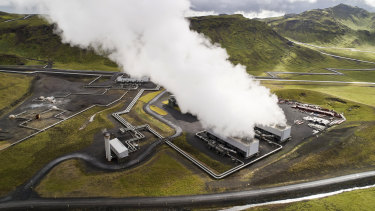 “If people hear those numbers for the first time they might think, ‘Oh wow, that’s expensive,’ but it’s always a question of what you compare it to,” Gebald said. The state of California subsidises electric cars around $US450 to $US500 per tonne of carbon emissions saved over the course of a vehicle’s expected life, for example, he said.

Longer term, Gebald thinks prices can get cheaper – by 2030, he said they expected prices around $US200 to $US300 per tonne. By the late 2030s, he thinks it will be half that – about the price where it will be a competitive method of reducing global emissions.

“That’s really the main problem, whether you can make it cheap enough. And there’s reason to believe that it could be possible,” said Stephen Pacala, the director of the Carbon Mitigation Initiative at Princeton University. If the technology were to cost $US100 per tonne of carbon dioxide and the aviation industry paid to offset the emissions from its aviation fuel, it would increase the cost of fuel by about $US1 a gallon, well within the range of seasonal price fluctuations, Pacala said.

The new technology “could be a big deal. It could be a really big business,” he said.

“This is indeed an important step in the race to net-zero greenhouse gas emissions, which is necessary to manage the climate crisis,” Icelandic Prime Minister Katrin Jakobsdottir said at the ceremony marking the opening of the Orca plant. “This almost sounds like a science-fiction story, but we do have other examples in our history of amazing advances in technology.”