The federal lawsuit, led by Attorney-General Eric Schmitt of Missouri, a Republican, argues Biden violated the separation of powers clause in the constitution because Congress, not the president, has the power to regulate. 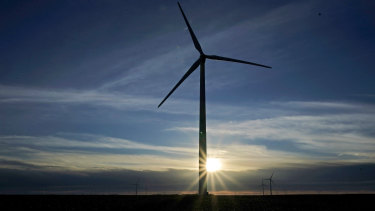 A wind turbine is silhouetted against the rising sun near Spearville, Kansas, one of the states suing US President Joe Biden over one of his first executive orders.Credit:AP

But the 12 states that are plaintiffs say assigning such values is a “quintessentially legislative action that falls within Congress’s exclusive authority”. They also say the economic ramifications of the order will be disastrous.

“If the executive order stands, it will inflict hundreds of billions or trillions of dollars of damage to the US economy for decades to come,” the suit reads. “It will destroy jobs, stifle energy production, strangle America’s energy independence, suppress agriculture, deter innovation, and impoverish working families. It undermines the sovereignty of the states and tears at the fabric of liberty.”

The White House and Department of Justice declined to comment.

The complaint asks the court to issue an order that prohibits federal agencies from using the “social cost” estimates and to declare they are “arbitrary, capricious, unreasonable, and contrary to law”, among other relief.

Executive Order 13990 also revoked the Keystone XL Pipeline permit and instructed the Interior Department to review the Trump’s administration’s decision to shrink the boundaries of national monuments. It was one of several early executive actions that Biden took to combat climate change during his first month in office.

Orders that Biden signed January 27 elevated climate change as a national security concern, committed to the goal of conserving at least 30 per cent (an increase from 12 per cent) of all federal land and water by 2030 and built on his economic policy agenda to direct federal agencies to “procure carbon pollution-free electricity and clean, zero-emission vehicles to create good-paying, union jobs and stimulate clean energy industries.

Biden campaigned on being the most aggressive president on climate change, which he called “an existential threat”. His goal is to decarbonise the US power sector by 2035 on the way to reaching net-zero greenhouse gas emissions by 2050.

States on both sides of the issue have sued the federal government on climate change.

Mostly red states sued to stop the Obama administration from implementing its Clean Power Plan aimed at slashing carbon emissions from coal-fired power plans. The US Supreme Court upheld the challenge in 2015 and the program never took effect.

In 2019, a coalition of mostly blue states sued the Trump administration to stop its efforts to weaken the Obama effort to put national limits on carbon emissions from power plants.