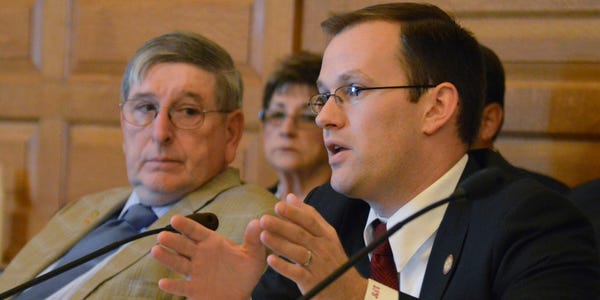 A man in Witchita, Kansas, was arrested on Friday over his alleged intention to kidnap and kill Witchita Mayor Brandon Whipple over his city-wide precautions in place to spread the stem of COVID-19.

According to a report from the Kansas City Star, Wichita police arrested 59-year-old Meredith Dowty on Friday and said he could be charged with making a criminal threat. The Witchita Police Department did not immediately return Insider's request for comment on Saturday.

Dowty was booked in the Sedgwick County Jail on Friday night, according to the report.

The arrest came after Whipple had been shown text messages received by another city official where Dowty requested personal information about the mayor, including his home address, and contained a "detailed" threat against his life, according to the Kansas City Star report.

"He said he was going to kidnap me and slash my throat and he needed my address because I needed to see the hangman — me and everyone who, something about tyranny," Whipple said, according to the newspaper.

The mayor added: "It sounded like the person was very upset about pretty much mask mandates and he said something about not being able to see his mother because of COVID restrictions on elderly homes."

Whipple said he believed the threat against him was credible and said "this wasn't just some guy popping off on social media," according to the report.

Dowty is a local musician and a retired firefighter who in 2008 was honored by the Wichita City Council for saving the life of a police officer who had been shot, according to the report.

Dowty's anger reported stemmed, in particular, from Whipple's city-wide mask mandate that was enacted in July and requires facial coverings in public spaces. As the Kansas City Star noted, the mandate has elicited in backlash and protest from individuals and groups who argue the mandate violates their rights and religion.

Most recently, after a lengthy 9-hour meeting in September, the Witchita City Council voted to extend the mask mandate through October 21, according to a report from local outlet Salina Post.

Similar anti-mask protests and sentiment have been prevalent in other US states and cities that have enacted mandates to curb the spread of the novel coronavirus this year.

The arrest comes just about one week after more than a dozen men were arrested, accused of hatching a plot to kidnap Michigan Gov. Gretchen Whitmer. The group of men, part of a right-wing armed militia group known as the Wolverine Watchmen, are accused of organizing in encrypted chat groups, meeting at various locations to train with weapons, and attempting to acquire explosives as part of the plot to kidnap the Democrat governor.

Whitmer has received some of the fiercest backlash nationwide to her COVID-19 prevention and mitigation measures throughout the pandemic. In May, hundreds of people — some armed with guns and other weapons — entered the Michigan state capitol in Lansing to protest a state order limiting business operations.