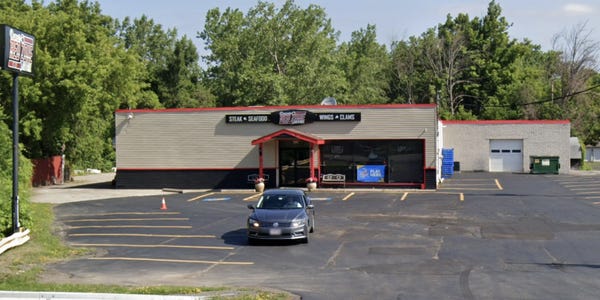 A 65-year-old man in upstate New York is facing a criminally negligent homicide charge tied to an incident in which an 80-year-old man died after a physical confrontation about face masks, according to the Erie County district attorney.

Erie County District Attorney John Flynn said in a press conference on Monday that Donald Lewinski shoved Rocco Sapienza to the ground during am altercation at Pamp's Red Zone Bar and Grill in West Seneca, near Buffalo, on September 26. Sapienza died on September 30.

Flynn said the day of the confrontation, Lewinski was not wearing a mask as he bought beers for a band that was playing outside the bar.

Flynn said Sapienza, who was sitting at the bar, had criticized Lewinski, saying he treated bar staff poorly and should be regularly wearing a mask to help prevent the spread of COVID-19.

After an "initial confrontation" that was defused, Flynn said, Sapienza walked back over to Lewinski to further confront him.

Flynn said Lewinski stood up from his barstool and shoved Sapienza to the ground.

"He was pretty much in an unresponsive condition right away. He went into a seizure right away there on the floor of the bar," Flynn said.

Sapienza was taken to a nearby hospital for treatment but was unresponsive until he died on September 30.

Flynn said prosecutors have no knowledge that Sapienza and Lewinski knew each other before the altercation, but bar staff told investigators that both men were regulars at the establishment.

"He could fill a room with his personality," Graziano said of Sapienza. "He loved to talk to people."

Lewinski is set to be arraigned at 5 p.m. on Tuesday in West Seneca Town Court, The Buffalo News reported. Lewinski's attorney, Barry Covert, told the outlet his client plans to plead not guilty.

"It's certainly a tragedy that Mr. Sapienza passed away," Covert said. "My client and his family want to express their best wishes and sympathy to the family of Mr. Sapienza."