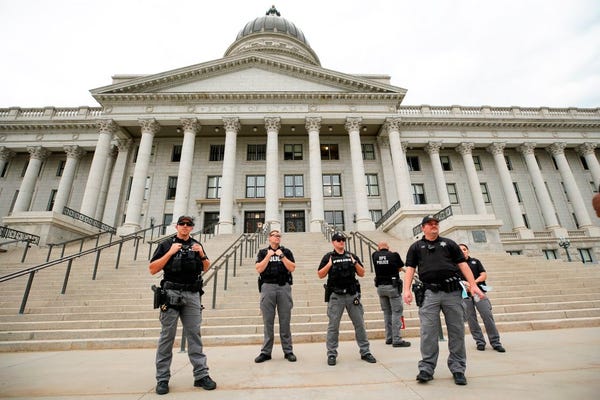 A Salt Lake City police officer who was caught on video ordering his K-9 to bite a Black man who was in his own yard was charged Wednesday with felony aggravated assault, The Salt Lake Tribune reported.

Last month, the Tribune published body camera footage taken on April 24. It showed footage of Officer Nickolas Pearce deploying his police dog at Jeffrey Ryans, who was on the ground in his yard with his hands in the air.

"Get on the ground or you're going to get bit!" the officer can be heard saying in the video.

Ryans then knelt on the ground with his hands in the air.

Six seconds after the initial threat, the officer told his K-9 to attack with the phrase, "Hit, hit."

After the video surfaced, the department suspended Pearce, as Ryans took initial steps to file a lawsuit against the city.

On Wednesday, though, county prosecutors made the unusual move of filing criminal charges against Pearce, who they said used "unlawful force."

The police department hasn't yet finished an internal affairs investigation into the case.

Despite that, the Salt Lake Police Association that represents officers has come to Pearce's defense, calling him an "excellent officer" and telling KUTV that it is in the process of obtaining a lawyer for the him.

Police unions are generally quick to come to the defense of officers accused of misconduct, even when the city oft department leadership wants them fired.

"We feel Officer Pearce acted within accordance of the law," association President Steven Winters told KUTV, "and we firmly stand behind him."

If convicted, Pearce can face up to 15 years in prison.