What a tragedy! Shop owners say they are being forced to move out of Shakespeare’s hometown Stratford after council spent £200,000 on ‘complete eyesore’ Covid safety measures

A tempest is brewing in Stratford-upon-Avon after council bosses turned the historic town into ‘an eyesore’ by spending £200,000 on garish safety barriers and unfinished tarmac.

Businesses say they are being driven out of Shakespeare’s hometown after ‘shambolic’ attempts at making the area Covid safe forced visitors away over the summer.

Tourists who were able to visit after the first lockdown said it ‘looked like there had been a terrorist attack’ due to the number of safety barriers that had been erected by the over-zealous council. 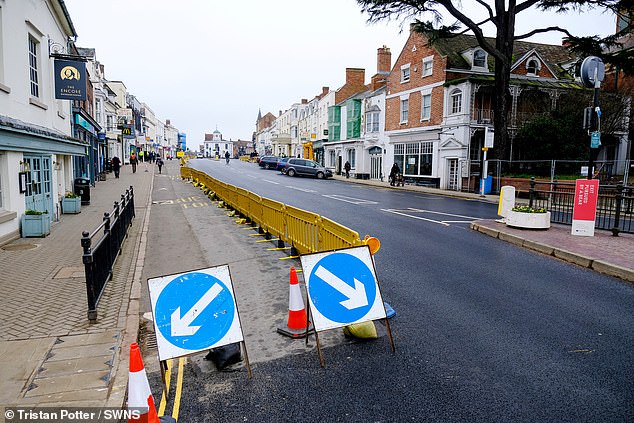 The bright yellow barricades were placed along streets outside stores, cafes and restaurants making it impossible to park outside or gain access for deliveries.

Now roads have been partially resurfaced, which has left tarmac only running down the centre of some streets in one of England’s most historic market towns.

Shop owners say they are being forced to move elsewhere in a bid to save their livelihoods after the chaotic social distancing measures crippled their businesses.

They said customers had also started branding the place Blackpool-upon-Avon after funfairs were allowed during the pandemic while local retailers suffered.

So far, the measures implemented in the Warwickshire town following the end of the first coronavirus lockdown in June have cost at least £192,000.

Art gallery owner Emma Clegg, 50, told how she had been forced to up and leave to Broadway in the Cotswolds due to the ongoing problems.

She said clients stopped venturing into the town due to a lack of parking, the new confusing road system and being unable to receive deliveries due to the barriers.

Emma, who runs The Stratford Gallery, said: ‘The pandemic was such a body blow for all the retailers.

‘The weekend before we were allowed to reopen they put up all these barriers which were an absolute eyesore.

‘Stratford is an old town, not a modern shopping mall; there are no rear entrances so we couldn’t have deliveries as the vans couldn’t get to us.’ 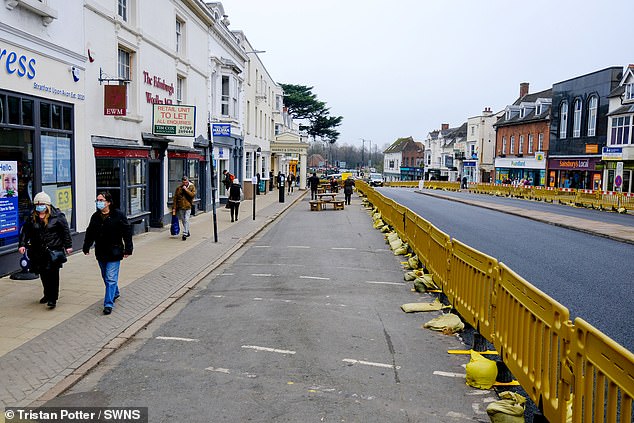 Emma who runs the gallery with husband Howard, 52, said a petition was launched and signed by over 100 people but their pleas to town hall chiefs fell on deaf ears.

She added: ‘It was all ridiculous and badly thought through – all the shops were up in arms.

‘The undertakers a few doors down from us were stuck as they had left the barrier so narrow that they couldn’t get the hearse out.

‘We had a group Zoom call with about 40 people on it and it was quite emotional and highly charged.

‘Even people like lawyers and dentists were saying this is a nightmare and their clients couldn’t get to see them.

‘They had also started to call it Blackpool-upon-Avon as a funfair was allowed even though they were insisting on social distancing in the town – it was just nuts.’

Retail giant Marks and Spencer also said trading had been especially difficult in the centre of the medieval market town.

A spokesman said: ‘The last year has been challenging for the whole retail industry and we know that local customers have sometimes found it more difficult to access our Bridge Street store due to pedestrian access issues and the temporary suspension of parking outside the store.’ 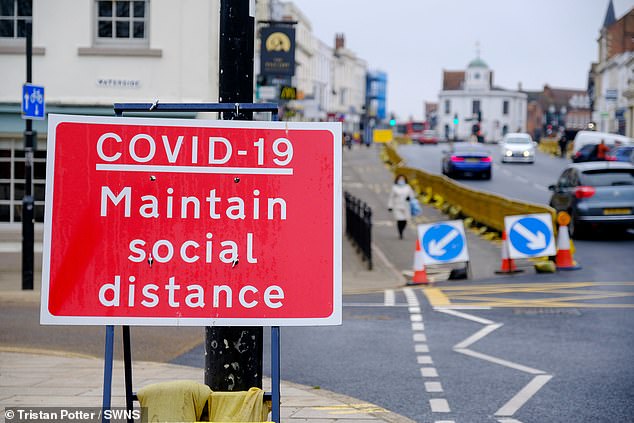 Roads have been partially resurfaced, which has left tarmac only running down the centre of some streets in one of England’s most historic market towns

Another shop owner, who wished to remain anonymous, said: ‘There is a genuine theme in Stratford of the local authority not supporting small businesses.

‘It has always been like that but it is now getting worse. For some reason, they treat the small companies with complete disdain.

‘They will always listen to the managers of the chain stores – I have never understood that way of doing things.’

Harry Fone, grassroots campaign manager at the TaxPayers’ Alliance, said: ‘Stratford taxpayers don’t want to see their money wasted in the rush to change local roads unnecessarily, especially when their council tax is about to rise.

‘The council’s original intentions may have been good, but the huge cost of the scheme should be proof enough that residents are being harmfully affected.

‘Councillors should heed the concerns of locals and review the suitability of these measures immediately.’

Councillor Jeff Clarke, portfolio holder for transport and highways at Warwickshire County Council, said: ‘The barriers are remaining on Bridge Street as these form part of the Covid-19 town centre scheme, which allows additional space for pedestrians to adhere to social distancing rules.

‘The resurfacing works for this area to be ready for when restrictions are will be completed when the Covid-19 scheme is removed.

‘This was agreed by the key stakeholders and elected members.’ 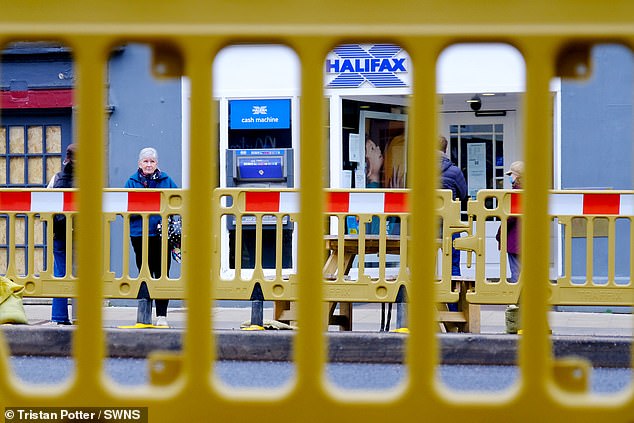 The bright yellow barricades were placed along streets outside stores, cafes and restaurants making it impossible to park outside or gain access for deliveries