New York: Robert Bailey knows the numbers by heart, having recited them to corner store shop assistants in New York every week, every year, for a quarter of a century in hopeful futility. 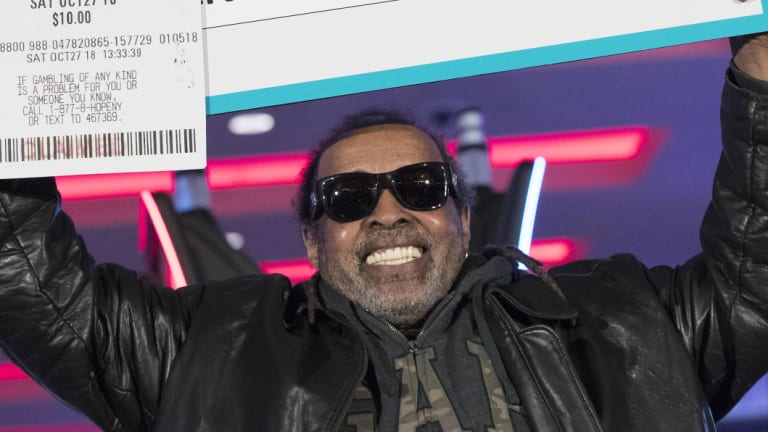 Robert Bailey poses for photographers after winning the Powerball in New York.Credit:AP

On Wednesday, he accepted his lump-sum check for $US125,396,690 — his cut after taxes — in a public ceremony at the Resorts World Casino in Queens.

Bailey, a self-described "humble" man who was wearing dark sunglasses and dad jeans, was splitting the Powerball jackpot with Lerynne West, 51, a mother of three from Redfield, Iowa, who had claimed her prize more than a week ago. She told the Des Moines Register that a clerk had generated the numbers randomly for her.

While West had announced plans to start a foundation, and to donate $US500,000 to an organisation supporting wounded veterans, Bailey said that he would "give back to Manhattan." He did not specify how he would do so.

But he also had a more immediate plan: "Get a house for my mother, God bless her, with a little land," he said. "Travel. And make good investments."

And, perhaps, go somewhere exotic. "I haven't been to Las Vegas in a while," he said.

But who needs Vegas when he can have the West Harlem Deli on Fifth Avenue?

The deli, which reaped $US10,000 for providing the winning ticket, is across the street from the apartment where he appears to live, according to public records.

The Saturday of that drawing was rainy, so Bailey said he rushed out of a friend's car to play his numbers; Bailey said he planned to "take care" of that certain friend who gave him a ride.

What are the odds?

The odds of winning the Powerball jackpot were 1 in 292,201,338 million, according to the Lottery. But what are the odds when a person plays the same number thousands of times over 25 years?

Aaron Tenenbein, a statistics professor at New York University's Leonard N. Stern School of Business, estimated Bailey's odds would have been 1 out of 115,385. "It doesn't matter if he's playing the same number, it's still the same chance," Tenenbein said. In other words: "It's pure luck."

Bailey said his winning numbers came from a set of digits given to him by a family member about 25 years ago, but would not elaborate. He said he played every New York state lottery game using those numbers — 8, 12, 13, 19, 27 and 40 — ever since. For the Powerball drawing, he adjusted the 40 to an allowable single digit.

Bailey did not even watch the live drawing, he said, but checked the results later after watching college football. He saw the first five numbers match. "When I saw the 4, I just was in shock," he said. He stayed up all night and barely slept that weekend.

It took him so long to come forward, he said, because "I had to see a lawyer and a financial adviser."

Bailey arrived in Queens clutching a fresh batch of tickets and numbers slips. "I had to play this morning before I came here," he said.