Alyssa Milano gets slapped down by guard for filming Kavanaugh hearing

No filming allowed – that means you Alyssa Milano! The moment Holywood star is told to put her phone down by security guard during heated Kavanaugh hearing

Footage shows Milano filming as Kavanaugh gave his testimony, and a security guard walking up to her from behind and ordering her to stop.

While non-flash photography is allowed, only accredited members of the press are permitted to record video in the Committee hearing room.

Despite this, Milano could be seen filming during the hearing, and also posted several videos from it on her Twitter account. 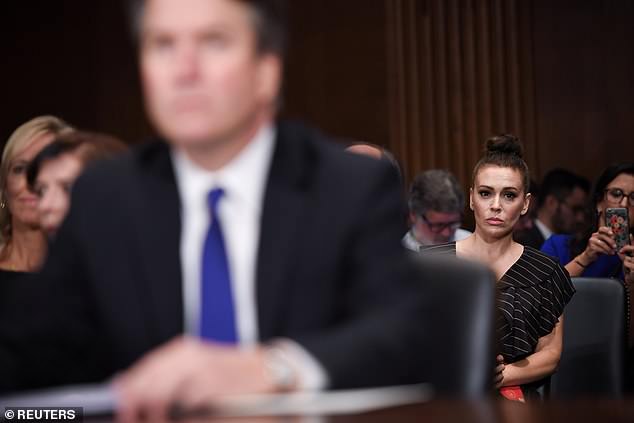 Breaking the rules: Actress Alyssa Milano had to be told by a security guard to stop filming the hearing as only accredited journalists may record video in the Committee hearing room

She also took to Twitter to ask Republican Senators Jeff Flake  and Ted Cruz to ‘not to give up your time and humanity by relinquishing your questioning to counsel.

‘Show Dr. Ford respect and decency by asking her any questions you may have. Look her in the eye. Allow yourself to feel something.’

The Charmed actress also posted a video of Kavanaugh’s emotional defence, captioning it: ‘I will say this…if a woman were to yell, interrupt and cry while being questioned, people would call her unhinged or say she had a melt down.’ 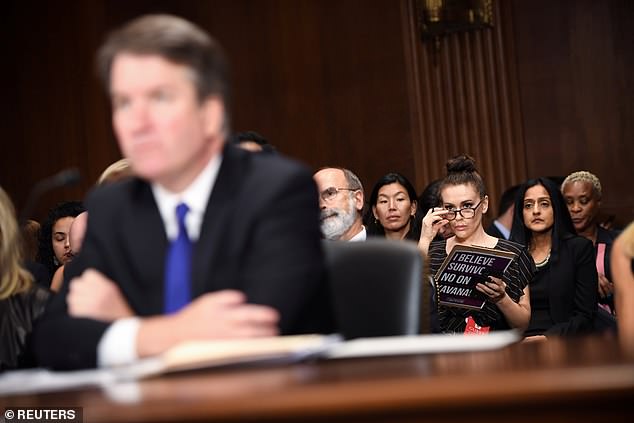 Support: Milano, seen sitting behind Kavanaugh during his testimony, attended the hearing to show support for Dr Christine Blasey Ford as she testified

Milano, who was invited as guest of California senator Dianne Feinstein, said she traveled from Los Angeles ‘to show support for Doctor [Christine Blasey] Ford, to stand in solidarity with other women, other survivors that have been through similar experiences.’

‘I think the most beautiful thing that’s come out of the last two years is really understanding that women are here for each other. To be part of that is very special,’ Milano told AFP.

‘I think it will be very difficult for all of us,’ said Milano, who has been active in anti-Kavanaugh protests.

‘I think that we all know that this is hard for her, this is not something she’s really choosing to do but something that she feels that she has to do.’

Speaking in the packed hearing room shortly before Blasey Ford began to testify, Milano acknowledged it was likely a terrifying moment for the California psychology professor.