Amazon has sacked a driver after he was caught on CCTV dropping a parcel and kicking it along the road.

CCTV footage shows the driver accidentally dropping a parcel after getting out his van in Doncaster, South Yorkshire, on December 1.

Instead of picking the parcel up, the man then kicks it, sending it tumbling down the road. 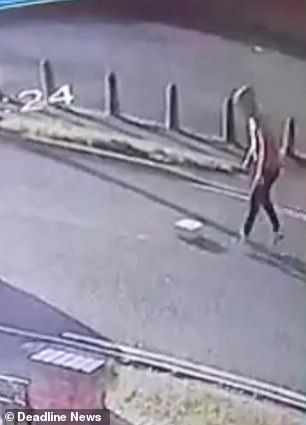 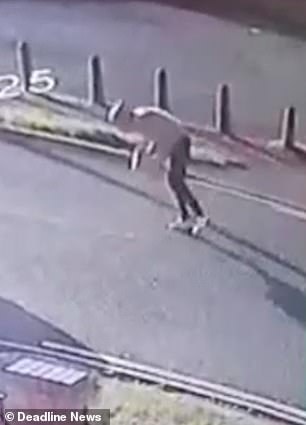 CCTV footage shows the driver accidentally dropping a parcel after getting out his van in Doncaster, South Yorkshire, and kicking it along the road

The driver eventually scoops the parcel up and makes his way to the address.

The recipient’s neighbour, David Whiteside, 28, who was watching the scene unfold, comes to his door to speak to the courier.

He alleges that he was told to ‘shut up’ by the courier when he challenged him about his behaviour and was told to stop complaining as it ‘wasn’t his parcel’.

The driver stops in his tracks as Mr Whiteside can be seen wagging his finger at him.

The angry neighbour took to Facebook to complain to Amazon.

He posted the clip on their page and said: ‘This is what happens when Amazon drivers don’t care about their job. I was not happy, he kicked it twice.

‘When I told him it’s not right to do that, all I got was ‘it’s not your parcel so shut up.’

Mr Whiteside added: ‘I got no response from Amazon on Facebook, which I feel is a bit of an insult, as I did not have to report it to them.

‘I have been buying from Amazon for years and had Prime with them, but it has put me off them, as I feel my parcel might get mistreated.’

Amazon announced on December 4 that they had let the driver go.

An Amazon spokesman said: ‘We have very high standards for our delivery service providers and this clearly doesn’t meet those standards.

‘We will be ensuring the driver does not work for us again, and have reached out to the customer to make it right.’