Amsterdam ensures there’s always somewhere to go, like in a planter

Amsterdam: Amsterdam has installed open air public urinals topped with planters that can harvest the urine to tackle the scourge of so-called "wild peeing".

Twelve GreenPee urinals in the Red Light District and popular nightspots of Leidseplein and Rembrandtplein, were unveiled last week. 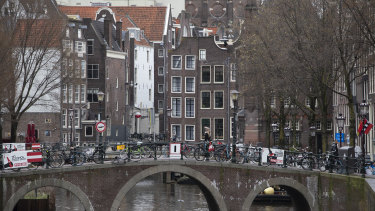 The Red Light District in Amsterdam.Credit:AP

By day they are closed and hard to distinguish from normal planters.

But at night, they are discreetly lit and indicated by tourist guides for passers-by who find themselves caught short. The authorities say this helps prevent unhygienic late-night public urination that can damage buildings and create unpleasant odours.

Richard de Vries, inventor of the GreenPee, said: "Peeing against a wall is going to damage historic buildings. It is dirty, unhygienic and attracts flies. We came up with the idea of a planter to help keep the city green and provide something we can make fertiliser from."

Mr De Vries has supplied GreenPees to three other Dutch cities and one in Belgium. His company regularly removes the urine for processing and phosphate harvesting, while the plants are fed continuously from a rainwater reservoir and long cotton wicks. He insists the urinals are odour free.

A spokesman for Amsterdam council said it had invested £50,000 ($91,000) for the urinals following tests last year.

She said that the pilot scheme appeared to have been successful, "with a 49 per cent decrease in the number of people urinating publicly in the Schapensteeg alley."

As in other cities, including London, open-air urinals have had a mixed reception.

One Amsterdam resident said she would not accept one in her street near the Leidseplein and would complain to the council. A German tourist said he was puzzled why anyone would choose an open-air urinal over a clean indoor public lavatory.

But a French tourist called them "a good idea", although it might be "embarrassing" to use them while there were crowds around.