Spring is fundraising season for schools. But the coronavirus pandemic and the subsequent switch to remote learning has crushed most schools' ability to host trivia nights, raffles and fetes.

Amid COVID-19’s disruption to students' learning and school timetables, schools have understandably focused on the basics of teaching and nurturing their pupils.

For public schools in particular, the loss of this much-needed extra income has squeezed their discretionary spending even tighter than usual. 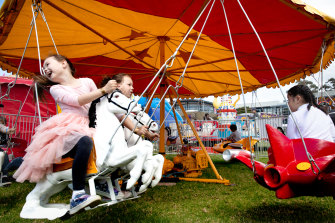 Children at a fair in Sydney last month. Melbourne schools have had to cancel fetes this year, losing important funding. Credit:Edwina Pickles

Money produced by fundraisers, however modest, is used by these schools to supplement the government funding they receive. It helps pay for basic student needs or curriculum and facilities upgrades: renovating dusty ovals, helping poor students buy books and uniforms, buying a musical instrument, upgrading a science lab largely untouched since the 1970s.

Many public high schools are reeling from an even bigger blow to their income streams. The collapse of international student enrolments has left them without hundreds of thousands of dollars in extra income.

The private school system has also suffered from a collapse in international student enrolments. Non-government schools have the ability to dip into endowment reserves or quickly reach out to community benefactors to help them get through difficult times.

Even in good times, private schools can boost their income through the generosity of alumni. Their investment in connecting, communicating and fundraising via their alumni gives them huge advantages. It’s one of the main reasons some private schools have facilities that resemble five-star hotels.

While it would be ideal if governments provided all necessary funds for public schools, that is not going to happen. No government, however well intentioned, is likely to overcome the twin demands of population growth and universal service provision to give public schools everything they need.

Our universal public hospital system is in the same boat. When members of the community donate to public hospital fundraisers, it is widely accepted and celebrated. People donate because they admire the institution and the values it stands for.

Public hospital websites and most private school websites have a "donate" button. These institutions have invested in secure, digital fundraising platforms that enable them to reach out to their supporters and make it easy for them to donate.

Meanwhile, public schools are nowhere near this level of contemporary fundraising infrastructure.

Public schools are up to the task – their leaders employ contractors and subscribe to services and they already fundraise from their parent communities.

Why shouldn’t all public schools be given the opportunity to connect with supporters beyond the school gates who admire what they do and the values they stand for?

Caroline Milburn is the CEO and co-founder of Ourschool, a non-profit organisation that helps public high schools connect with their alumni.