‘And then they dance’: The Holocaust survivors still celebrating life

In a Caulfield synagogue hall on Sunday, four Holocaust survivors aged in their 90s and more than 100 of their relatives and friends gathered to eat, sing and dance.

The quartet raised shots of whisky and made a toast, “L’Chaim” — to life.

Welcome to the Buchenwald Ball, a little-known annual Melbourne tradition for more than 65 years.

They were celebrating their liberation, in 1945, from the notorious Buchenwald concentration camp in Germany. After the war, more than 60 former youth inmates of Buchenwald settled in Australia. 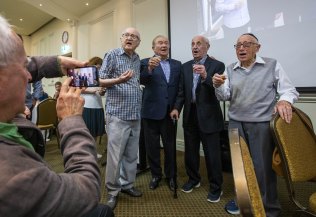 Some had no family left alive, but they counted their fellow “Buchenwald Boys” as brothers.

In about 1955, they created the Buchenwald Ball. They would dress up to the nines, and have a big night out.

It’s now a lunch event. There are now a handful of remaining Buchenwald Boys, but their descendants continue the tradition. 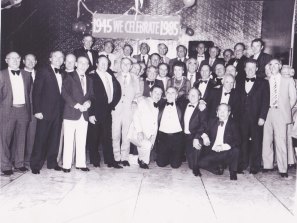 The Buchenwald Ball in 1985, 40 years after the survivors were liberated from the Buchenwald concentration camp.

Before the ball, they held a memorial service in a Jewish prayer hall at Springvale cemetery, and placed stones on the Buchenwald memorial outside.

Sandi Rapoport, daughter of Buchenwald Boy Szaja Chaskiel, said the ball, held at the Caulfield Shule (synagogue) after the service, was a symbol of Nazi failure. 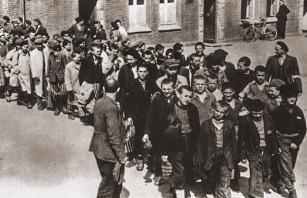 Newsreel footage of boys being escorted out of Buchenwald concentration camp after liberation by the US Army.

“It’s [us saying] ‘see, we survived’,” Ms Rapoport said. “‘[The Nazis] didn’t get the job done. Look at us, we’re dancing, we have children, grandchildren, great-grandchildren’.”

Buchenwald Boy Szaja Chaskiel, 92, considers the anniversary of the camp’s liberation akin to a birthday. He told the service that dead bodies were ever-present in the concentration camps.

“I never thought I would survive,” he said.

He urged the children to keep telling the stories of their ancestors’ experiences. “It’s important that the world should know the Holocaust did exist because there are a lot of deniers,” he said.

Chaskiel told how in January 1941, aged just 11, he and his sister, Zisl, 9, had to dig their father Sandel’s grave, after he was shot dead for refusing to help hang 10 fellow Jews in the Nazi-occupied town of Wielun, Poland.

The 10 Jews, including Sandel’s uncle, were blamed for a Nazi’s death in a motorcycle accident.

In the next four years, Chaskiel escaped from a Nazi forced-labour gang, hid with a Catholic priest, and later survived imprisonment in the Lodz Jewish ghetto and both the Auschwitz and Buchenwald concentration camps.

Chaskiel vividly remembers liberation day, on April 11, 1945, when an American rabbi, Herschel Schacter, told the Buchenwald boys, in Yiddish, “children, you are free”.

Asked by The Age how he survived the Holocaust — his parents and three of his six siblings died — Chaskiel said, “I was lucky, that’s all”.

When he immigrated to Melbourne in 1949, he had no relatives in Australia but the Buchenwald Boys were there for him. “Every time we met, we talked about the war, how we survived, what we did, everything. And we still do,” he explained.

Academic Anita Frayman, whose website for Monash University tells the story of the Buchenwald Boys, is the daughter of Buchenwald Boy Joe Kaufman, who died last year, aged 94.

Dr Frayman said the phrase Buchenwald Ball could be seen as an oxymoron, but celebrating and commemorating is “part of the Jewish way”.

“At the Jewish wedding when the groom stamps on the glass, that’s to remember the tragedies that they’ve gone through,” she said. “And then they dance.”