Anger as Oxford Union says it will host Steve Bannon

Calls for cancellation and protest as debating society at the University of Oxford says it will host far-right figure. 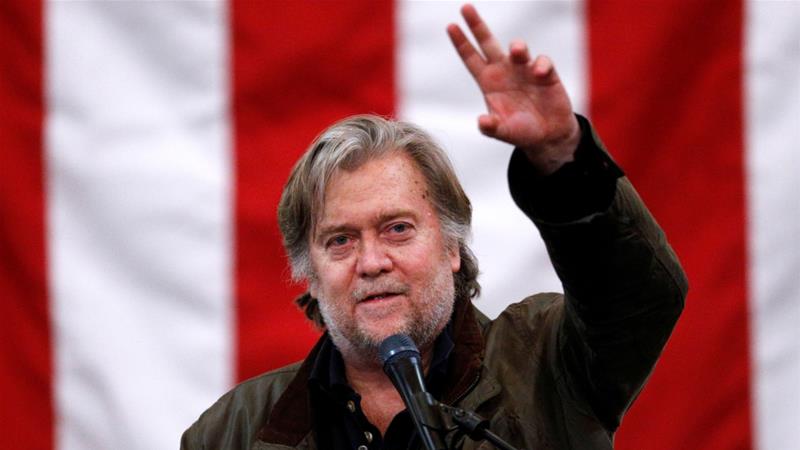 Oxford Union announced on Wednesday that Steve Bannon, US President Donald Trump’s former chief strategist and a figure commonly associated with the far-right movement, will speak to students on Friday.

The announcement comes days after the Oxford Union, a debating society at the University of Oxford, cancelled an appearance by Alice Weidel, the leader of German far-right opposition party Alternative fur Deutschland over security concerns.

Bannon is the cofounder of Breitbart news, a far-right populist outlet, and he reportedly oversaw the writing of executive orders prohibiting US visas for citizens of several Muslim-majority nations, commonly referred to as the “Muslim ban”, which Trump signed at the beginning of his term.

Aside from a harsh stance on immigration, Bannon promoted “economic nationalism” in the US, calling out China for what he viewed as unfair trade policies.

The Trump administration has levied tariffs on billions of dollars’ worth of Chinese goods in an attempt to reduce the US trade deficit, to which China has responded in kind.

Bannon left the Trump administration in August 2017, shortly after a white nationalist rally in Charlottesville, Virginia, which saw the death of counterprotester Heather Heyer.

The announcement has been met with criticism and calls for protest.

Twitter user Anthony Kreppel tweeted that Bannon’s invitation to speak “flies in the face of everything that decency stands for. Even at this late moment in time, I would hope that this invitation can be withdrawn”.

I would like to say, in the strongest possible terms, that I feel that extending an invitation to Steve Bannon to address the Oxford Union flies in the face of everything that decency stands for. Even at this late moment in time, I would hope that this invitation can be withdrawn

The Oxford Student chapter of Stand Up to Racism, a British organisation opposed to the far right, announced a protest against the talk.

The group’s Facebook event called on people to “oppose the far right”, accusing the Oxford Union of “legitimising racism“.

“We call on all those opposed to racism and the growth of the far-right to protest at the Oxford Union this Friday,” it said.

Since leaving the Trump administration and Breitbart, Bannon has created “The Movement”, a pan-European effort to provide far-right, nationalist movements with the resources to gain seats in the EU parliament.

Bannon’s speech at the New Yorker festival was cancelled after a similar outcry in September.