A disgruntled cyclist was caught on camera repeatedly swerving across the road and slamming on his brakes to stop a driver from overtaking him in a 20mph zone.

Driver Sam England, 40, had picked up his 12-year-old son from football when he pulled onto the A4109 near Seven Sisters, Swansea, behind two cyclists.

However the family soon noticed one irate cyclist shouting and waving at them before zigzagging across the road in a repeated attempt to stop the vehicle from passing. 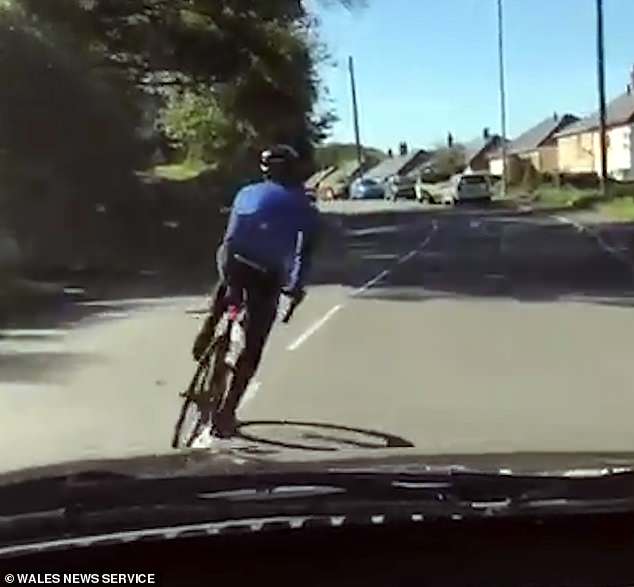 In the footage the cyclist (above) is caught repeatedly swerving across the road to stop driver Sam England, 40, from overtaking him on the A4109 near Seven Sisters, Swansea 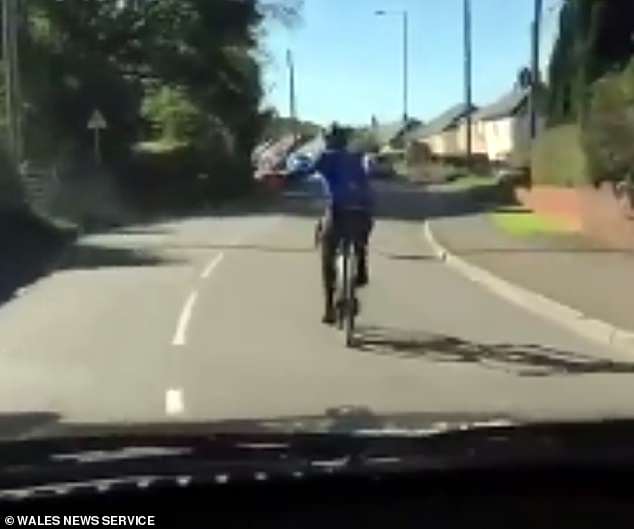 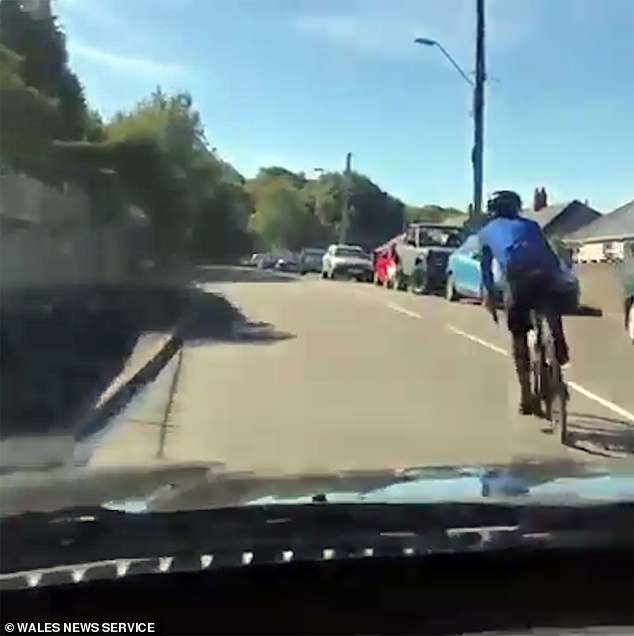 Mr England’s wife Tammy, 39, who was also in the vehicle, filmed the cyclist weaving across the road and onto the wrong side in a repeated attempt to stop their van from passing

Mr England’s wife Tammy, 39, filmed the cyclist weaving across the road and onto the wrong side.

Mobile phone footage shows the rider blocking the car from overtaking – while looking back and shouting.

Mr England, of Ystradgynlais near Swansea, South Wales, said: ‘He was doing all the hand gestures and giving me abuse all the way.

‘I had my window down so I could hear it all.’

Mr England slowed down in the 20mph zone – but the cyclist soon became more animated. 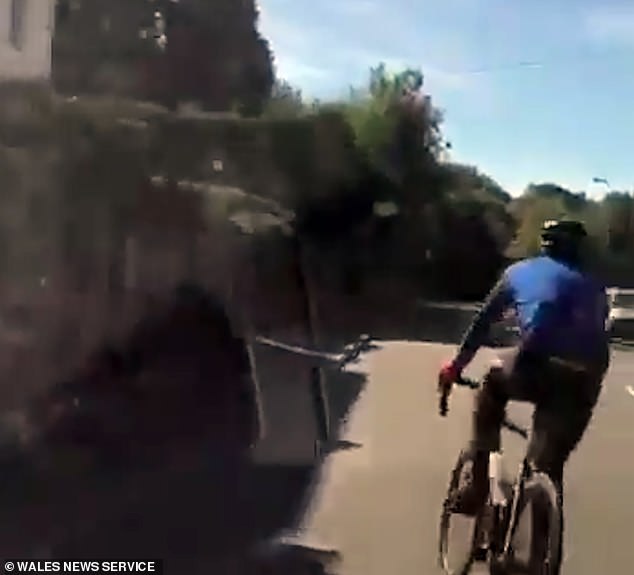 According to Mr England the cyclist shouted: ‘What’s this then?’ before glancing down at the driver’s speedometer 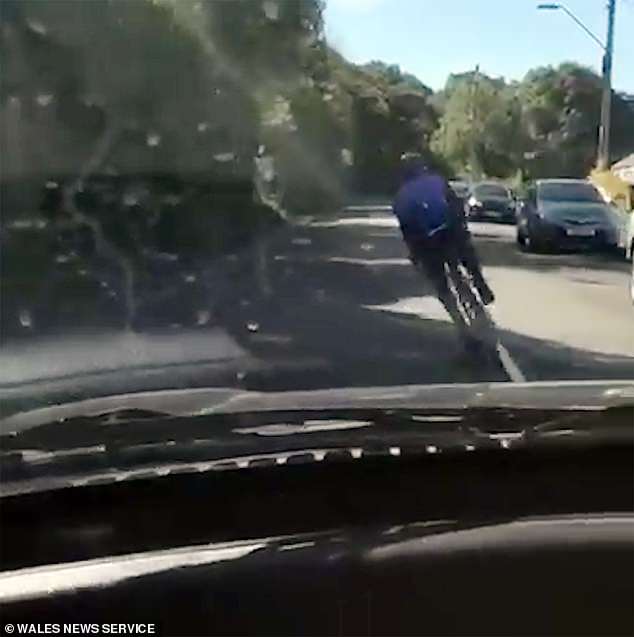 Mr England, of Ystradgynlais near Swansea, South Wales, said: ‘He was doing all the hand gestures and giving me abuse all the way’

Mr England said: ‘He shouted: ‘What’s this then?’ but then I saw him glance down at his speedometer.

‘I slowed down to the speed limit, but he must have been doing around 25mph and that’s when he overtook me.

‘Then he just zigzagged in front of me all the way up the road.’ 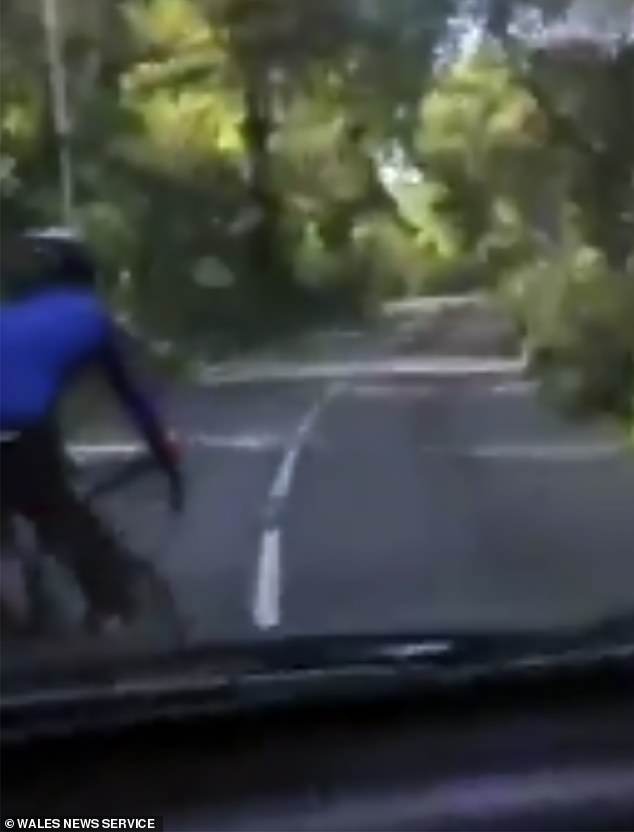 Mr England had been driving on the road with his wife, son and his son’s friend also in the car with him.

He didn’t retaliate and just followed the cyclist before contacting the police and handing over the video as evidence.

However after being told by the police that nothing could be done as they could not identify the cyclist, Mr England decided to appeal for help in finding the cyclist. 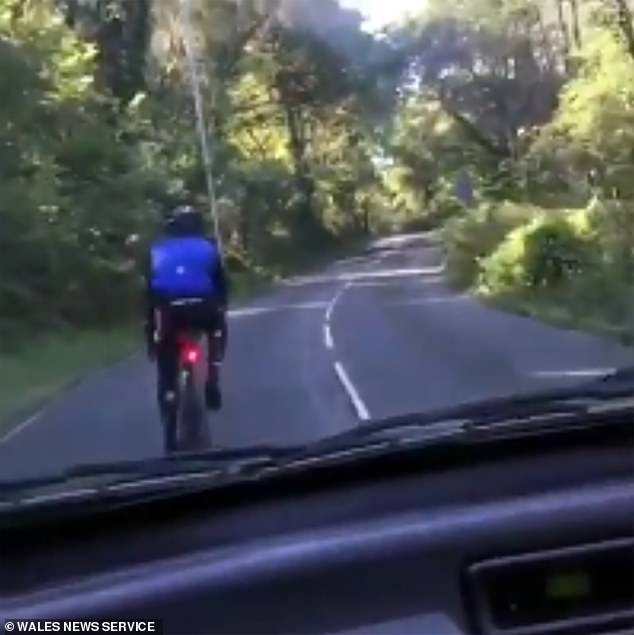 Mr England is now appealing for help to find the cyclist. His video post on Facebook has since gathered more than 600,000 views on Facebook and more than 2,000 comments

His video post on Facebook has since gathered more than 600,000 views and more than 2,000 comments from people expressing their frustration regarding the cyclist’s behaviour.

One user wrote: ‘Did you see how the cyclist slows down in front of the car, hoping the car would hit him?? Obviously trying to get the car driver into trouble.’

However another user requested the events prior to the incident should be shown writing: ‘What happened in the minute before that video? Pretty sure he wouldn’t be riding that way unless provoked.’