The Arc de Triomphe is wrapped in 270,000 square feet of sheet to posthumously complete 59-year project of late artist Christo

A giant sheet of fabric was draped down the Arc de Triomphe in Paris on Sunday as work started to wrap the monument in a tribute to late artist Christo.

After weeks of preparations, the final stage of the art installation has begun, with a silver-blue sheet of recyclable polypropylene unfurled from the top of the imposing war memorial at the top of the Champs-Elysees.

Over the next few days, the entire Arc will be wrapped in 270,000 square feet of fabric – the signature of Bulgarian-born Christo, who died last year – and the finished project will remain on display from September 18 – October 3.

He had dreamed of sheathing the 50-metre-high monument since renting a nearby apartment in the 1960s.

But despite completing other major public works during his lifetime, including wrapping the oldest bridge in Paris in 1985 and the German parliament in 1995, the Arc de Triomphe project never materialised before his death.

The completion of his vision – and that of his co-designer and wife, Jeanne-Claude – has been overseen by his nephew Vladimir Javacheff in coordination with the Pompidou museum and French authorities. 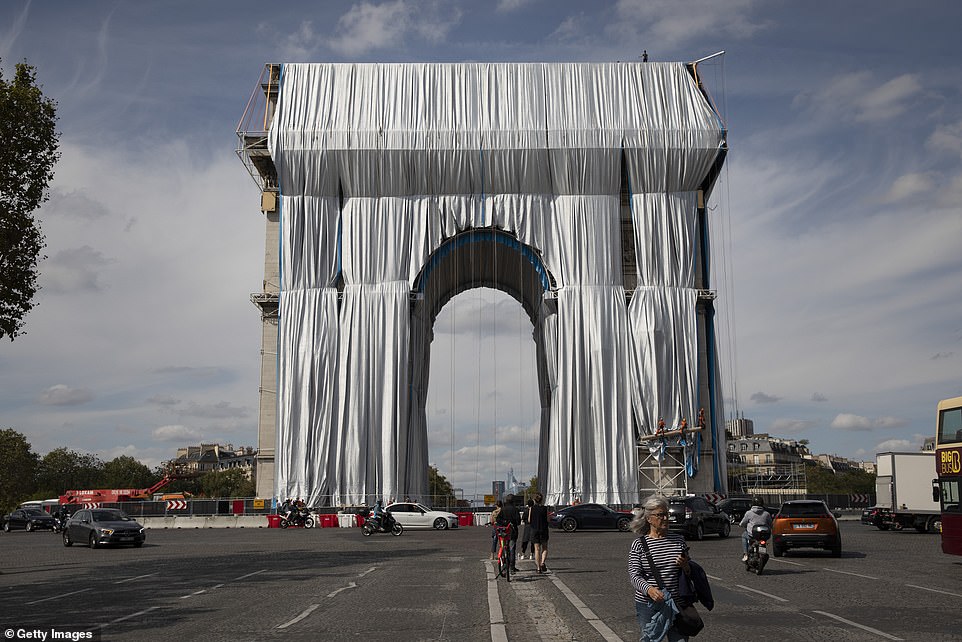 Workers begin the process of wrapping up the Arc De Triomphe monument in silver-blue fabric on September 12, 2021, in Paris 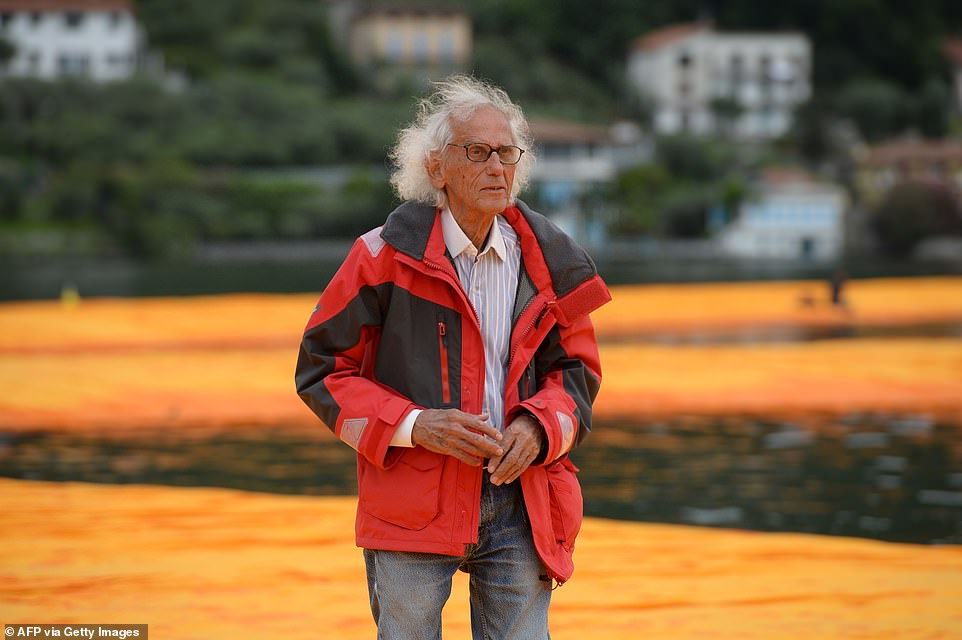 Christo Vladimirov Javacheff passed away at 84 on May 31, 2020, and had long dreamed of wrapping the Arc de Triomphe 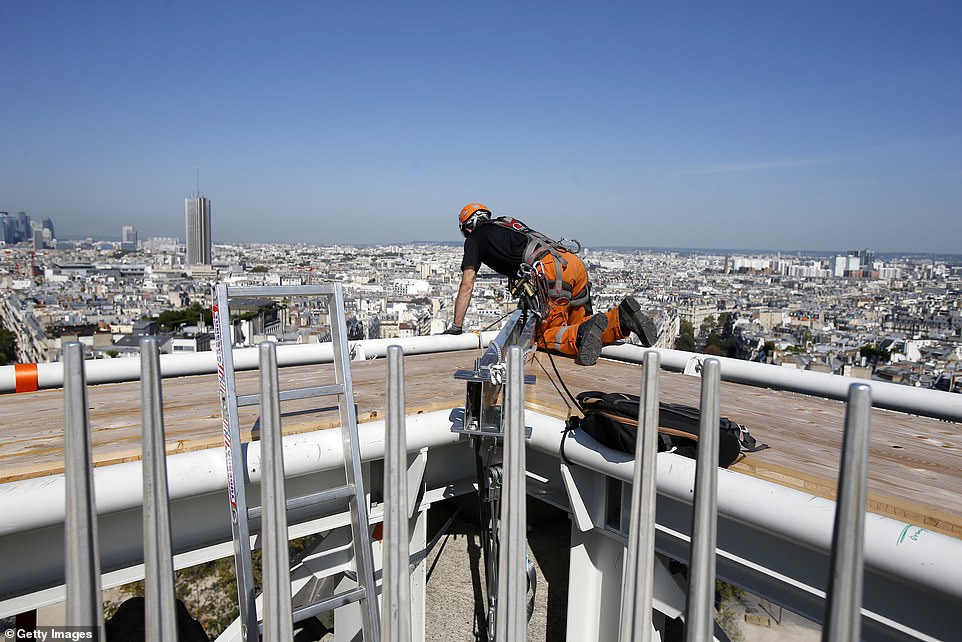 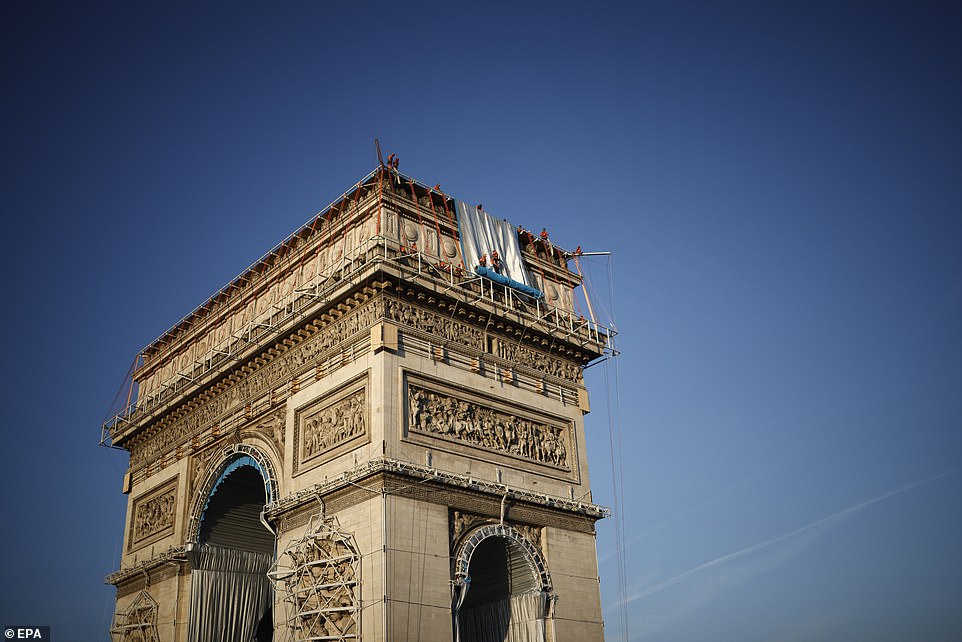 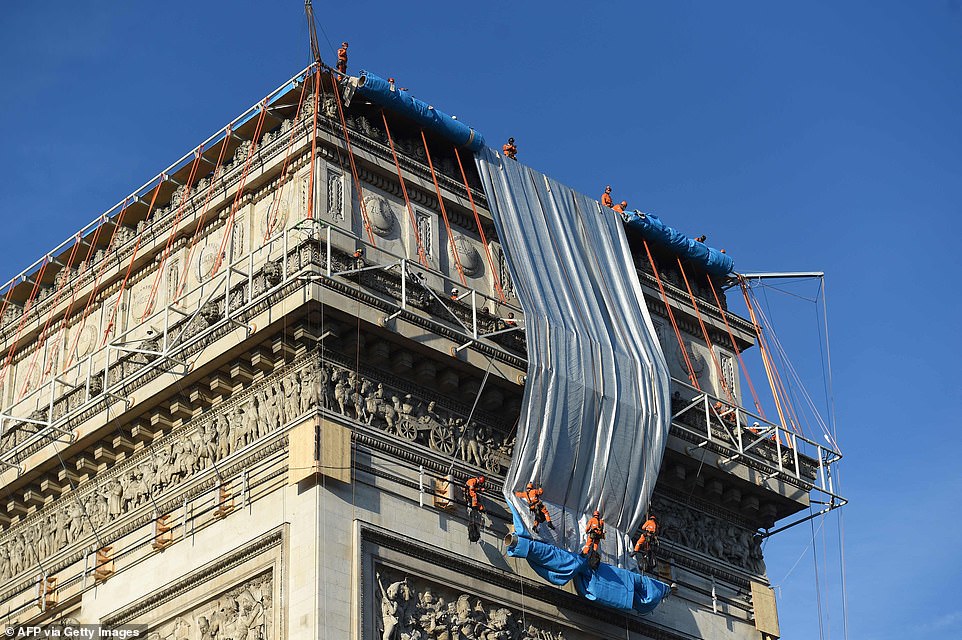 Dressed in orange suits and safety equipment, the workers drew the sheets down the sides of the Arc from rigging attached to its crest 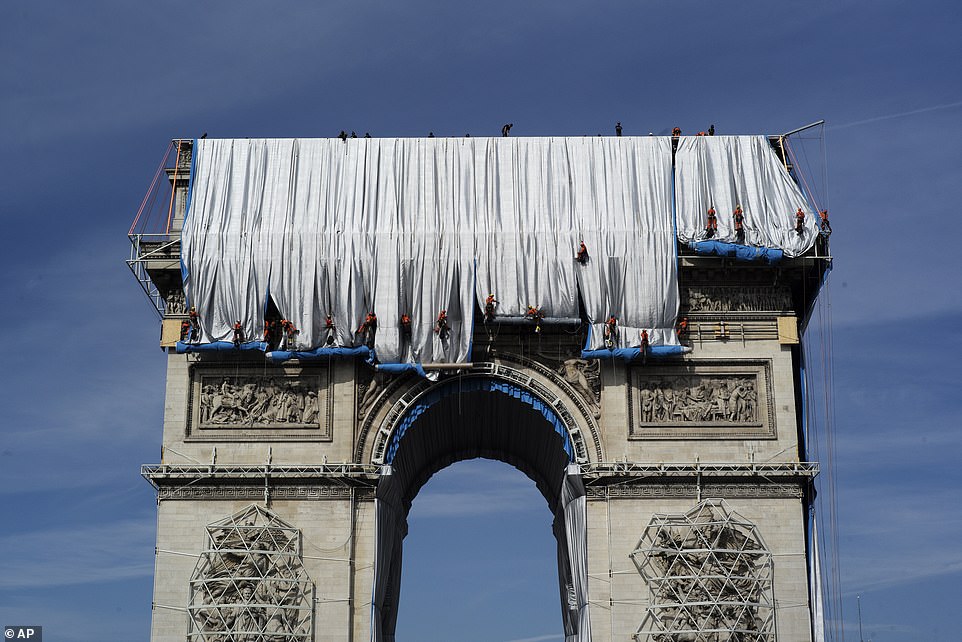 Over the next few days, the entire Arc will be wrapped in 270,000 square feet of fabric – the signature of Bulgarian-born Christo, who died last year 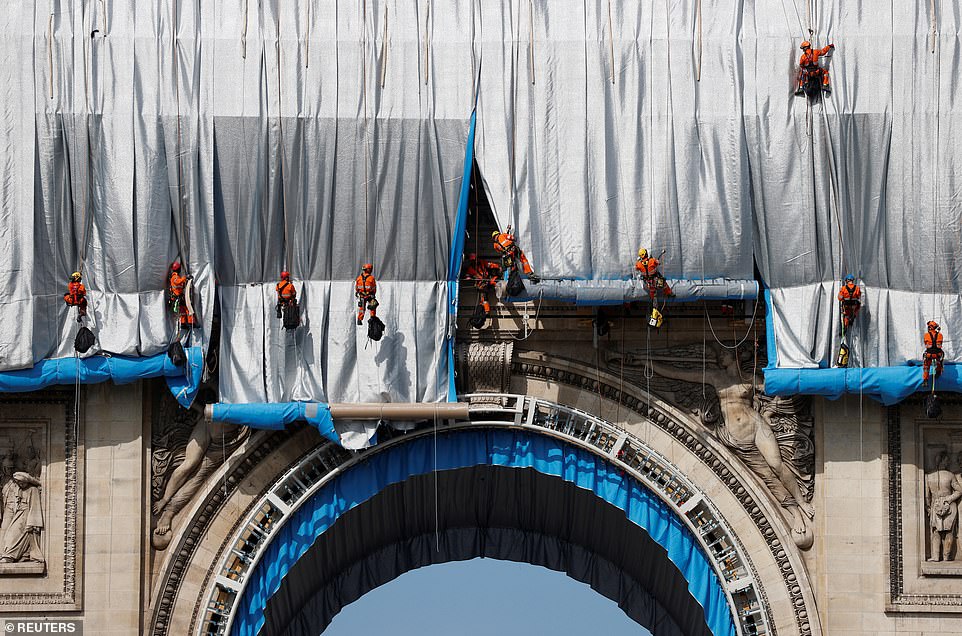 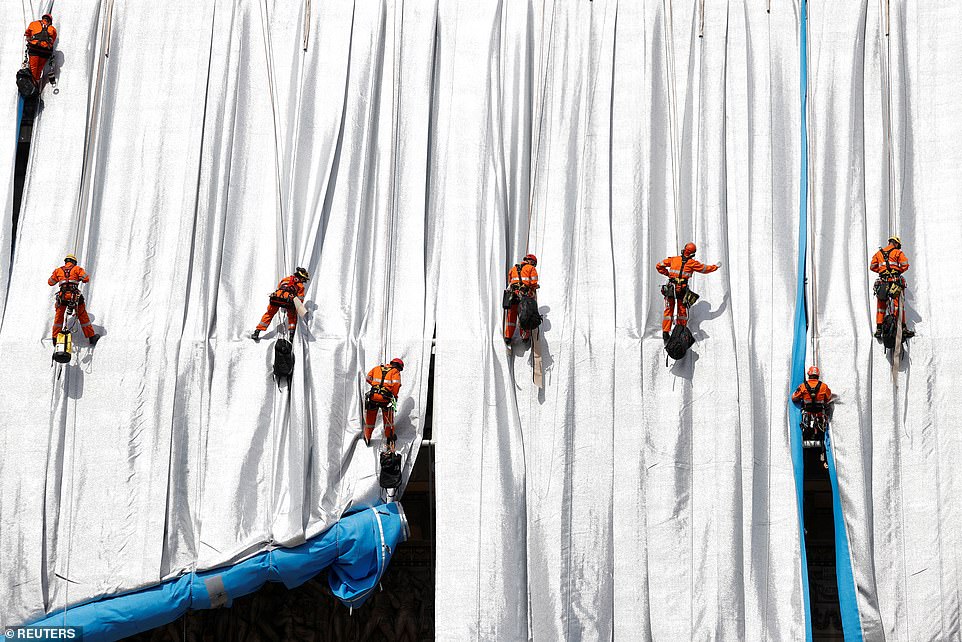 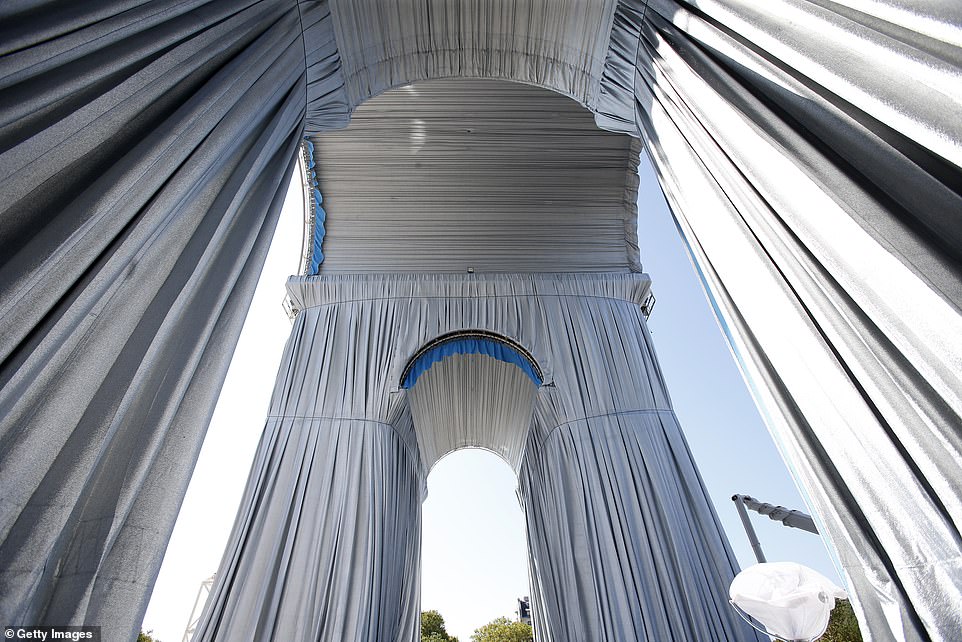 The entirety of the monument will be wrapped and will give one of Paris’ most recognisable pieces of architecture a pulsating, fluctuating effect

‘Today is one of the most spectacular moments of the installation,’ said Javacheff.

‘The wrapped Arc de Triomphe starts to take form and approach the vision that was a lifelong dream for Christo and Jeanne-Claude.’

It is due to be completed on Saturday, after which the protective barriers will be removed and the public allowed to get up close to the transformed monument before it is removed on October 3.

The project has been funded entirely by the late artist’s estate and has not incurred the use of any public funds.

Money for the project was raised through the sale of Christo’s preparatory studies, drawings, and collages of the project as well as scale models, works from the 1950s and 1960s, and original lithographs on other subjects.

It is a fitting tribute to the late artist and his wife, but not everyone has welcomed the project.

Architect Carlo Ratti, a friend of Christo’s, wrote an editorial in Le Monde this weekend saying it was wrong to waste so much fabric at a time when the fashion industry is responsible for such high levels of carbon emissions.

For Christo, though, who left sketches and photo montages of his plans, the vision was that the Arc would become ‘like a living object stimulated by the wind and reflecting the light’.

‘People are going to want to touch the Arc de Triomphe,’ he said.

The monument, which was built by Napoleon to commemorate fallen soldiers during his military campaigns, has been recently restored after being defaced by anti-government ‘yellow vest’ rioters in December 2018.

As well as the polypropylene fabric, the project will use 3,000 metres of red rope, all of which can be recycled.

Born on June 13, 1935 in Bulgaria, Christo left his home in 1957, living in several countries before arriving in Paris, where he met his future wife Jeanne-Claude.

He died of natural causes at his home in New York in May last year.

The Arc de Triomphe, with the flame at the tomb of the unknown soldier still alight, will be accessible throughout the 16-day exhibition. 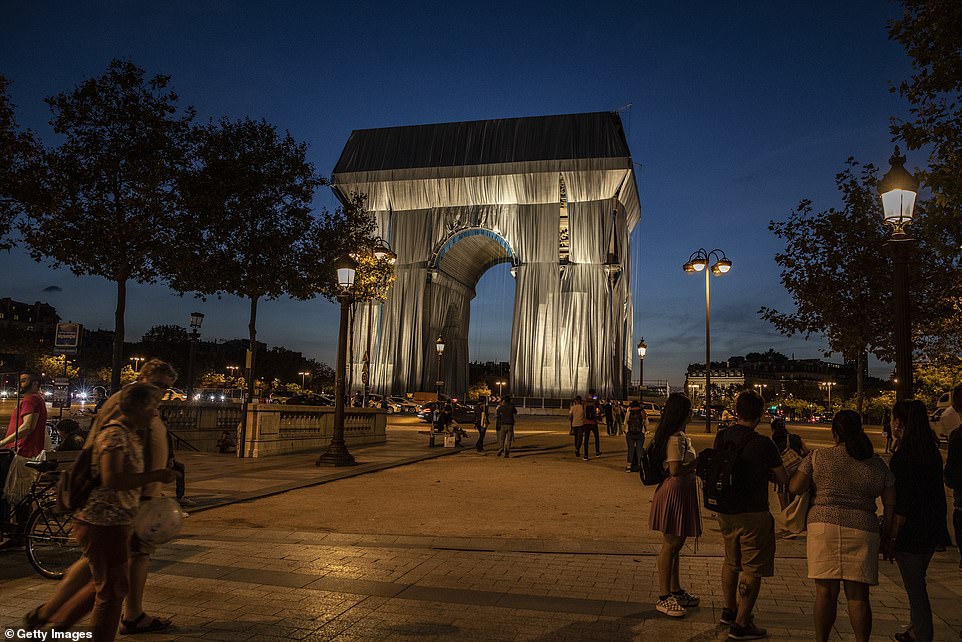 By Sunday evening, most of the wrapping appeared to have been completed, but the project will open to the public on September 18 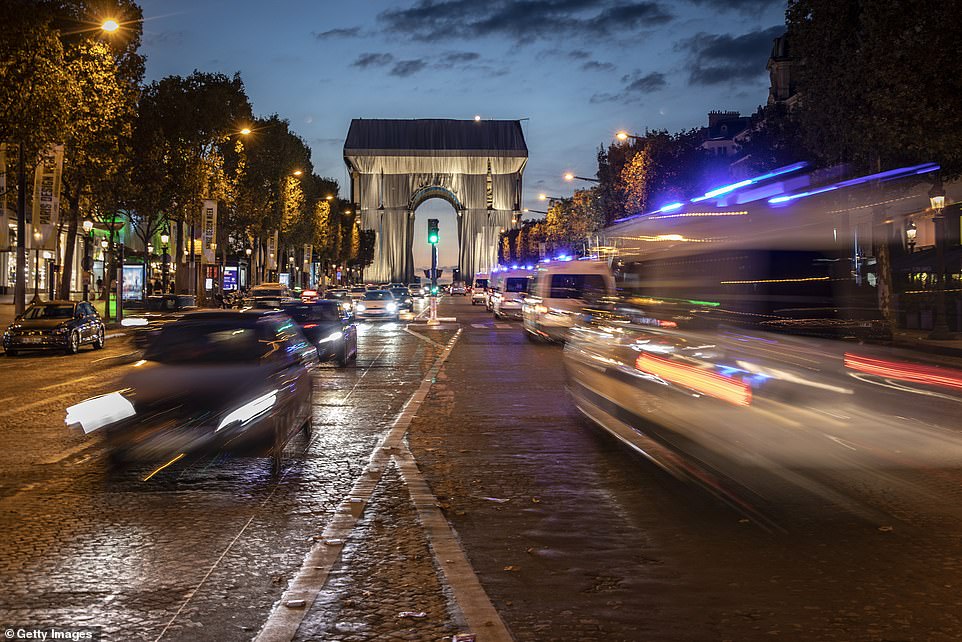 Who were Christo and Jean-Claude?

Christo Vladimirov Javacheff (1935-2020) was born on June 13 in Gabrovo, Bulgaria, and is one of the world’s most well-known environmental artists.

He left Bulgaria in 1956, first to Prague, Czechoslovakia, then to Vienna, Austria in 1957, before moving to Geneva, Switzerland.

In 1958, Christo went to Paris, where he met Jeanne-Claude Denat de Guillebon (1935–2009), a talented artist in her own right who became not only Christo’s wife but his life partner in the creation of large-scale, environmental works of art.

Wrapping became their signature style and involved covering large monuments and prominent architecture in a variety of sheets to produce an eye-catching effect and bring life to the inanimate. 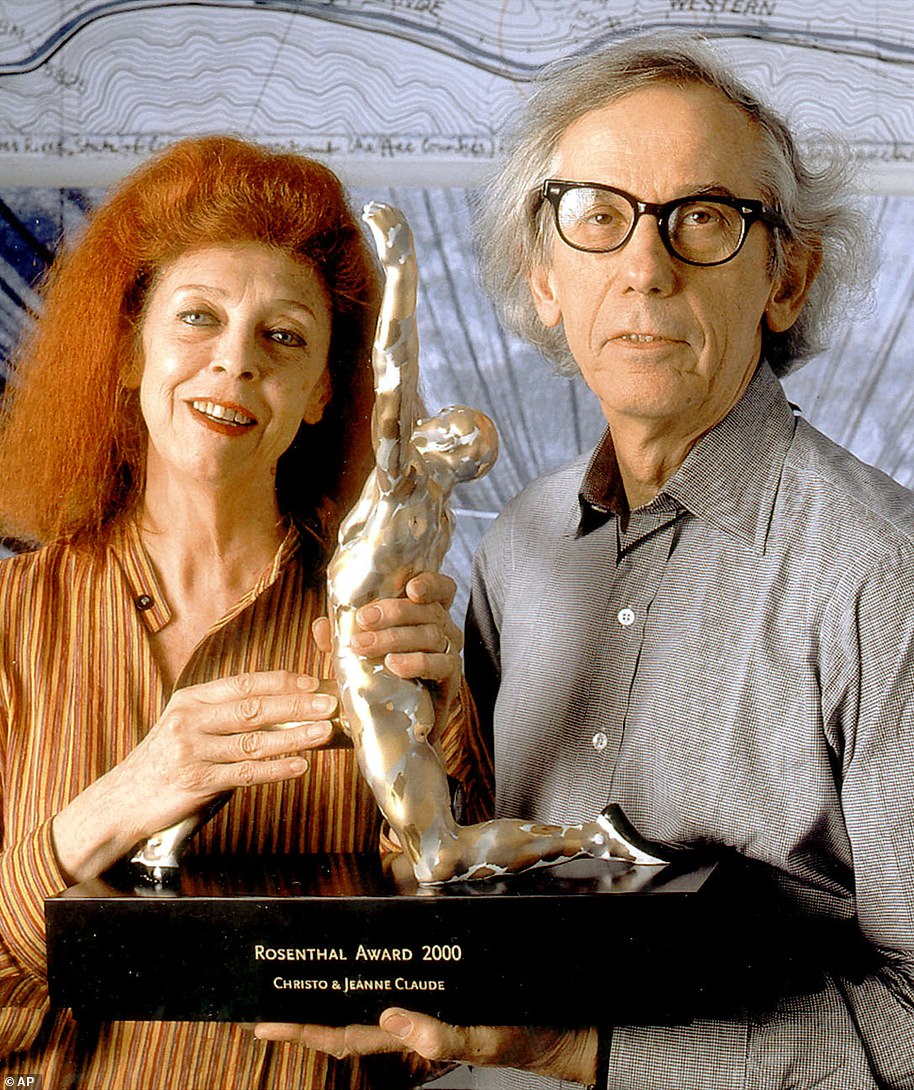 Christo and Jeanne-Claude receive the Rosenthal Award, a lifetime achievement award recognising their designs, in 200