Astronomers still stewing after 70 years over clouds above Milky Way

The mystery at heart of Milky Way: Astronomers still stewing after 70 years over mushroom clouds at centre of galaxy… so were they caused by exploding stars or a black hole swallowing a gas cloud?

Yellow clouds billowing tens of thousands of light years upwards from the centre of the Milky Way which baffled astrophysicists for more than 70 years may finally have an explanation.

Space experts spotted the celestial mystery hanging above our galactic home in the 1950s, naming it the North Polar Spur.

At first people believed it was just part of the space debris in the night’s sky but some astronomers argued it was part of an expanding shockwave.

For that to have been correct another cloud would have been seen below the Milky Way but no evidence for that was detected until in 2010 a space telescope picked up very faint gamma way glows of two huge bubbles. 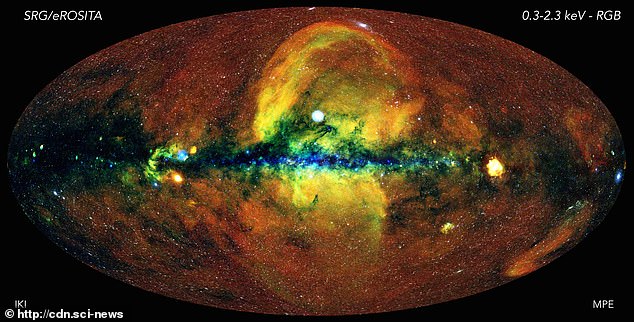 Based on the energy required to make the massive mushroom cloud bubbles experts say the first option was a wave of thousands of stars suddenly came into being and promptly went bang.

The alternative option suggests the supermassive blackhole at the heart of our galaxy may have caught a large cloud of gas passing by, eating half the cloud while its energy spewed above and below the Milky Way causing the bubbles.

Jun Kataoka, an astronomer at Waseda University in Japan said of the first idea: ‘The metal abundance is very small. 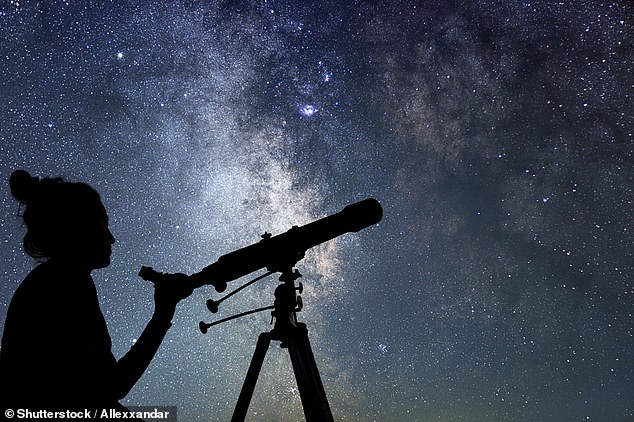 ‘So I don’t believe that the starburst activity happened.”

And Peter Predehl, an astrophysicist at the Max Planck Institute for Extraterrestrial Physics in Germany added he agreed it is more likely to be the second idea:

He said: ‘We did some analysis.

The teams agree however there was a massive explosion at the centre of the galaxy around 15milllion to 20million years ago which we can still see today.

Last year researchers with NASA’s Jet Propulsion Laboratory, the California Institute of Technology and Santiago High School, suggested The Milky Way Galaxy may be home to alien civilizations, but there is a strong probability that most of them are dead.

The statement comes from who used an updated version of an equation to calculate the likely existence of intelligent life and determined aliens may have emerged some eight billion years after our galaxy formed.

With these results, the team included the idea that progress of science and technology inevitably leads to the destruction of civilizations and because humans have yet to make contact outside our planet, scientists now think they know why.